Why we have to have a proper debate about THIS Europe 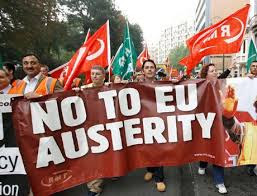 Henri was the name of my friends exchange student. I was 14 years old. He was my first encounter with “Europe”. Trying to communicate in “Franglais” which had us as at times rolling about in laughter as he explained that it was a sheet he needed and not a shit. It made me realise that Europe was more “non-English” than English and as such more like me. In a way, that initial experience stayed with me and I have always regarded “Europe” as a good thing.

However, it’s not just the treatment of migrants that makes me question my position on the EU project.

Let’s take the European Parliament. Interest in voting in EP elections has steadily declined from over 70% to just 43%. There are many reasons behind this negative trend but you can sum it in the phrases low trust and low accountability. Caroline Lucas in a recent piece for the Huffington Post wrote:“I'm the first to admit that the EU is far from perfect - indeed my decade in the European Parliament as an MEP confirmed that to me. In recent times it has been locked in the hands of neoliberal national Governments who have attempted to use it to their own ends.”

I fully agree with Caroline but THIS Europe for me has been locked into “neo liberal hands” for decades, not just recently. THIS Europe has been legitimised and created through far reaching acts such as the Single Market Act, linked to the treaty of Amsterdam which have laid the basis for the corporate dominated Europe we have.

Let’s take the European Commission. This is a wholly unelected executive and civil service organisation rolled up into one. This is one of the centres of power in the EU project. It has the power to propose legislation.

Let’s take Greece, Spain, Ireland, Italy, Slovenia, Portugal, Slovakia, all in the Eurozone who have been effectively treated as “financial colonies” through the imposition of “structural reforms” , which we all know means, job losses, more shit work, cuts in public service and the fire sale of public assets.

Let’s take climate change. Here the EU takes first place if you place all global pledges side by side. However, whilst within the EU you will find really excellent actions, these have been locally (at district, city, town or regional) driven. In THIS Europe we have had the appalling Emissions Trading Scheme, which from the outset set out to give the big polluters huge windfall profits. Moreover as we cruise to 40% reductions by 2030, what fails to get mentioned is that we have used phoney/useless offset measures, relocation of dirty production and discounting any CO² contribution arising from the transportation of all the stuff that we like to buy in order to place ourselves in pole position as champions of climate change.

Let’s take NATO and its transformation as a force for keeping peace to one of making war. Which brings me back to the migrants and my questioning of the EU project.

Talking with activists and those working for not for profit organisations in Brussels (where I work) and across the EU there is a growing questioning of the EU project taking place. National and EP elections are sending the same message as more people start to question the EU. We as a party need to also make some reflection.

Our party has always regarded the “European Project” with justified caution. In fact if you revisit our EU policy then you will find the following:

EU301 The present EU structures are fundamentally flawed. Their remoteness has resulted in a lack of accountability which is working against the interests of people and the environment.

EU302 Our aim is to reconstitute the EU as a democratically accountable and controlled European Confederation of Regions, based on Green principles. Its organisation would follow the Green principle of subsidiarity, that decisions are made at the lowest appropriate level, not impose the "harmonisation" of the current EU.

This policy goes back to the 1990’s before we had any MEP’s in the European Parliament. Since 1999, the party has pursued a policy to bring about reform from within. Has this worked? What are the tangible real gains that we can identify that signify some positive and meaningful reform? Can we bring about change from within? If we think we can, then should we also think whether we are in the right grouping inside the parliament? Since we have had MEP’s a new Green and United left group has been created. Podemos and Syriza as well as Scandinavian Green parties can be found in this group. Should we move to this Group?

We also need to review our policy ahead of the referendum because the party I joined five years ago is no longer the same party in that our membership has increased by 500%. We need to engage with our new and wider membership in reviewing this policy.

If you are interested in putting some time and effort into such review then please get in touch.

Haroon Said is member of Waltham Forest and Redbridge Green Party and a supporter of Green Left
Posted by Mike Shaughnessy at 11:53