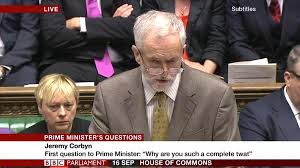 Jeremy Corbyn’s first appearance as Leader of the Opposition at Prime Minister’s Question Time unveiled his approach to these weekly set piece events in Parliament. I watched it live on the BBC TV feed and the first thing I noticed was that it was very different to the normal adversarial point scoring style we have come to expect, and that the public says it dislikes.

These sessions can get very boorish at times, but today passed off in a much more subdued, flat even, type of way. Corbyn read out six questions submitted by Labour Party members or the general public in quite a monotone fashion, and this seemed to disarm the Prime Minister, David Cameron, who has obviously decided to play along with the new format, for the time being at least.

It would not have looked good if Cameron poured scorn over questions from the public on matters that are important to them, so in the main the point scoring jibes were dropped. However, the questions were not really specific or tight enough, rather they were open questions which Cameron batted away quite comfortably.

If Corbyn is to use this format more often, then I think his team needs to structure the questions and any follow up questions in a more focussed way than was apparent today. PMQs is an opportunity to hold the Prime Minister and his government to account, and to raise the profile of the Opposition Leader in a way that will catch the news head lines.

This might seem cynical, and is, but much as the public complains about the knock about style of Parliamentary questions sessions, most of them only catch about ten seconds of these events on the evening news bulletins. They will notice the different style that was presented today, but will they conclude that Corbyn will be a better Prime Minister than Cameron? Probably not.

But it was a pretty good start by Corbyn, he came over as thoughtful, polite and sincere in his desire to represent what is of concern to the voters, rather than get into a slanging match with Cameron. Overall, I would say it is worth pursuing this experiment, but tweaking it a bit, to add focus.

Whether this approach will last is open to question though. Ed Miliband, when he became Leader of the Opposition in 2010 tried something similar, as did David Cameron when he first assumed the role in 2005. Both abandoned this style fairly quickly, and we were soon back to business as usual.


Far from a disaster for Corbyn, it went reasonably well and something he can build upon for the future.