Sustainable Development: Something New or More of The Same? 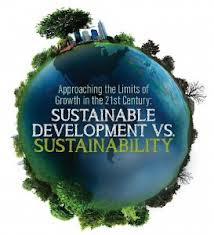 Written by Charles Eisenstein and first published on his blog here

Two years ago when he was 14, my son Matthew grew six inches. Last year he only grew two inches, and this year he has only grown half an inch. Should I be worried?

Of course not. At a certain stage of maturity, quantifiable physical growth slows and stops, and a new mode of development takes over.

Imagine that I did not understand that, and fed Matthew growth hormones in a desperate attempt to keep him growing taller. And imagine that this effort was harming his health and depleting my resources. “I have to find a way to make his growth sustainable,” I would say. “Maybe I can use herbal hormones.”

Our civilization is at a similar transition point in the nature of its development. For thousands of years we have grown — in population, in energy consumption, in land under cultivation, in bits of data, in economic output. Today we are beginning to realize that this kind of growth is no longer possible, nor even desirable; that it can be maintained only at greater and greater cost to human beings and the planet.

The time has come to shift to a different kind of development, development that is qualitative rather than quantitative, better and not more. I wish our policy elites would understand this. Case in point: the new U.N. Sustainable Development Goals (SDGs) convey real concern and care for the environment. Yet at the same time they are wedded to the ideology of economic growth — more GDP, more industrial infrastructure, roads, ports, etc. — without considering whether other forms of development could better meet their goals of poverty elimination and ecological sustainability.

The way out of poverty for the “least developed countries,” the SDG prescribes, is to develop export industries to raise GDP (targeting 7% growth). Unfortunately, in many countries this strategy has proven to be a recipe for more poverty, not less. The wealth usually ends up in the hands of local elites, the corporations who extract the resources, and the financial institutions that lend the money for the development. How else to make one’s country “attractive to investors” but to guarantee that they will extract more money than they put in? It is no wonder that while global GDP has nearly tripled since 1990, the number of people suffering food insecurity has also risen, and the middle class has stopped growing or even shrank in many countries.

Then there are the environmental consequences. What are these countries going to export, if not timber, mining products, and other natural resources, along with raw labor power? What else could the roads and ports be used for? The SDGs propose more of the same while hoping for a different result – a good definition of insanity.

A closer examination of what economic growth really is will illuminate the point. Economic growth, as conventionally measured, refers only to goods and services exchanged for money. That means that when indigenous peasants or self-sufficient villagers stop growing and sharing their own food, stop building their own houses, stop making their own entertainment, etc., and instead go to work at factories or plantations and pay for all of these things, GDP rises and they are considered better off.

Their cash incomes may have risen from nearly nothing to five dollars a day, but they are now at the mercy of global markets. When commodity prices plummet (as they are now), when their nation’s currencies fall (as they are now), local prices rise and they are plunged into destitution. This would not happen if they retained some independence from the global commodity economy.

Only if we take the standard development model for granted is economic growth a necessity to alleviate poverty. In a system where all money is created as interest-bearing debt, it is a mathematical certainty that poverty and wealth inequality will increase unless income (the ability to service debt) grows faster than the debt itself. The income of many countries and people is now falling, leaving only one option to make debt payments: austerity. Austerity and (conventional) development are two sides of the same coin. Both are geared to opening a country to export its wealth. The prescriptions of austerity – privatization of public assets, removal of trade barriers, removal of labor protections, deregulation, cutting of pensions and wages – are precisely the same as the neoliberal prescription for economic development. These measures make a country more “attractive to investment.”

So let’s stop taking this system for granted. First, let’s address poverty by encouraging resiliency and independence from global markets, in particular through local food autonomy, local control of resources, decentralized political institutions, and decentralized infrastructure that isn’t predicated on generating foreign exchange. Second, let’s remove the underlying driver of the compulsion to monetize – the national and private debts that have been the prime implements of colonialism since explicit colonialism ended in the 1960s. (The SDGs, laudably, make mention of debt reduction. This needs to happen on a massive scale.) Third, let’s start talking about fundamental reform of our broken, debt-based financial system, which both drives economic growth and requires growth to survive. It throws everyone into competition with everyone else, propelling a “race to the bottom” that cannot end until the entire planet has been converted into product.

Switching from chemical to herbal growth stimulants (“green” or “sustainable” development) isn’t going to solve the problem. If development equals growth, then “sustainable development” is an oxymoron. Poverty and ecocide are baked into the cake. It is time to transition to a world in which wealth no longer means more and more.

Charles Eisenstein is the author of Sacred Economics and The More Beautiful World Our Hearts Know Is Possible.

Posted by Mike Shaughnessy at 09:37