Local councils are starting to tear strips off TTIP 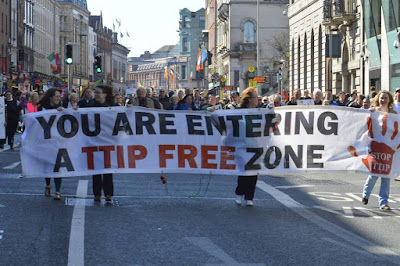 Politicians in both Brussels and Westminster have taken great pains to try and brush off people’s many concerns about the toxic trade deal being pushed through by the EU and the USA. But an exciting new front is emerging in the battle against TTIP, harnessing the energy of grassroots groups to push opposition to the corporate power grab up the political food chain via the power of local councils. In the UK and across Europe, TTIP Free Zones are popping up like people power mushrooms.

On the one hand, it may be seen as a symbolic gesture to get your local council to declare itself a TTIP Free Zone, after all these councils don’t have a direct say in whether or not the deal would be passed. But there is a real political value in creating pressure in this manner – it’s a powerful expression of grassroots opposition that MPs and MEPs might otherwise not be exposed to.

But TTIP Free Zones are equally importantly a means of promoting an understanding of what impact TTIP would have on the powers of local councils.  TTIP could also affect existing powers granted to local authorities such as planning. The decision of Lancashire County Council to deny planning permission for fracking in the local area is the sort of decision that would be harder to make under TTIP – first because such a decision could be challenged under ISDS, and second because of the pressure to ‘harmonise’ energy regulations.

The provision of local public services and procurement could also be affected. Current EU rules allow for environmental and social considerations in awarding contracts. For example, local governments can decide to buy only fairtrade or organic produce. Local authorities are also allowed to ensure that procurement benefits small and medium-sized businesses in the area – for instance a number of cities, including Manchester and Glasgow, have become Sustainable Food Cities, and are trying to use more locally sourced, sustainable food in the public sector.

This could all be threatened under TTIP because the European Commission, keen to access US local markets by getting rid of “Buy America” schemes across the Atlantic, has said it wants TTIP to open local procurement to greater competition. This means that procurement could be constrained far more by price alone – giving US multinationals more access to markets at the expense of the local economy and the environment. Official EU estimates are that TTIP will induce a 25-50%  liberalisation of government procurement.

So it’s not surprising that in a short space of time, 19 local councils across the UK have, to some extent, declared themselves as being a TTIP Free Zone, including Sheffield, Glasgow and Bradford city councils.  Chas Booth, a Green Party councillor for Leith, Edinburgh which is one of those 19 councils, said:

“In Edinburgh, we are proud of initiatives such as the Edinburgh Guarantee which aims to ensure employment or training for school leavers. Likewise the Edible Edinburgh initiative aims to encourage local and seasonal food. These are just two of the possible targets from corporate lawyers if TTIP goes through unchallenged.”

And it’s not just the UK. In Austria, Germany, France and Belgium there are significant numbers of TTIP Free Zones being declared by local authorities. When negotiators in Brussels leave their meetings they immediately walk out into the Brussels municipality which is itself a TTIP Free Zone.
There are 39 no TTIP councils in Spain and a good covering in Northern Italy. This is a Europe-wide movement of local resistance to the corporate power grab that TTIP represents.

There’s still a long way to go. There’s over 400 local councils of different kinds in the UK, so there are a lot of opportunities for local groups who are concerned about TTIP to raise the issue. Fortunately, Global Justice Now has worked with Unison, the public sector union, to produce a campaign pack, consisting of briefings, posters, leaflets, badges, stickers and a sample motion for you to use in getting your local council to come on board with the TTIP Free Zone campaign. They’re free and can be ordered from this website.

The biggest threat of TTIP has always been to democracy – the threat that corporations could have more say about what we eat, what we wear and how we structure our societies. So it’s fitting that one of the most exciting forms of pushback happening right now is happening at the level of local democracy that is less impeded by the corporate lobbying that’s so prevalent in Brussels and Westminster. Get in touch with your local councillors about becoming a TTIP Free Zone and let us know how you get on.

Read the briefing on local authorities and TTIP.

Donate to the crowdfunding appeal to get as many TTIP Free Zone packs out to people as possible
Posted by Mike Shaughnessy at 03:08