Maintain Green Party policy on withdrawal from NATO. It cannot be ‘reformed’ into a peace-building organization. 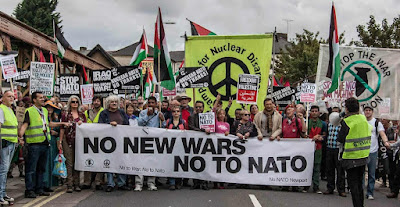 NATO’s official remit has been a defensive alliance for European peace & security, yet it has been a military aggressor for rich Northern nations against weaker nations, increasingly on a global scale.  For those aims, NATO uses the ‘special relationship’ with UK - a euphemism for its complicity with US military aggression.  NATO has become an ever-greater threat to world peace, especially given its policy on first use of nuclear weapons.   Let’s maintain the Green Party’s policy for withdrawal from NATO.

For all those reasons, many Green and Left-wing parties around Europe have opposed their own countries’ membership in NATO.  The pro-NATO lobby has recently softened such opposition by exploiting Russia’s unjust invasion of Ukraine and the necessary armaments for its self-defence.  This has become a pretext for a Europe-wide military expansion greatly increasing investment, production and trade in weapons.  This is driven by NATO’s increasingly global aggression, which also conveniently finances the arms industry.

Moreover, NATO has played a part in worsening the Russia-Ukraine conflict. At the June 2021 Brussels summit, NATO leaders reiterated their earlier decision (at the 2008 Bucharest Summit) that Ukraine would eventually become a member.  In March 2022 President Zelensky indicated his willingness for Ukraine to be a militarily neutral country.  But the US government has preferred to antagonise Russia by continuing the prospect that Ukraine might join NATO and by expanding military installations near its borders.

Contrary to its official rationale as a ‘defence’ alliance, NATO has regularly used violence for political-economic objectives, especially against regimes resisting subordination to the US.  Since 1989, NATO supporters have sought its permanence by exaggerating ‘security threats’, while NATO has expanded its remit far beyond Europe.  It has used or threatened military attack for the USA’s political objectives.  (See Annex below for details.)

Such intimidation includes nuclear weapons:  In NATO’s Charter, Article 5 maintains the option for the first use of nuclear weapons.  It has ‘nuclear-weapons sharing’ arrangements on the territory of five member states.  NATO poses a major threat to a peaceful world and global nuclear disarmament.

‘The North Atlantic Treaty Organisation (NATO) is a military-oriented body, which imposes conflict cessation rather than encouraging peace building. As such, it is not a sustainable mechanism for maintaining peace in the world. In the long term, we would take the UK out of NATO. We would also end the so-called "special relationship" between the UK and the US.’

This stance is contradicted by the spring 2022 conference Motion F02, sections PSD 317-319. They sanitise NATO's role as supposedly peace-building and security for weaker nations – the opposite of its real role. The Motion implies Green Party support for the UK staying in NATO, pending imaginary efforts at 'reforms'.

Do you want to sanitise NATO’s military aggression, weapons expansion and further militarisation of society?  If you do not, then maintain the current policy for withdrawal from NATO.

Oppose the NATO sections of Motion F02, as in the amendment being proposed.

Article written by some members of the Green Party of England and Wales and Green Left: Martin Francis, Jay Ginn, Les Levidow.

Since its inception in 1949, NATO’s claim for a defence role has been repeatedly contradicted by its military aggression and political domination.  Its official pretence  has facilitated the abuse of military power for rich Northern nations.   Consider these examples:

1961 Turkey: US nuclear-armed missiles, capable of reaching Moscow, were placed in Turkey. They were removed in 1963 as part of the deal for US to renounce any invasion of Cuba and for the USSR to remove its missiles there.

Post-1989:   The Warsaw Pact was a key rationale for establishing NATO.  Although the Pact was disbanded in 1989, NATO continued.   It used the opportunity to expand the membership and militarise countries bordering Russia.

2001 Afghanistan:  Led by NATO-member forces, the 2001 Western invasion devastated Afghanistan on the pretext of fighting back against the 9-11 culprits. Of course, they had come from Saudi Arabia, which conveniently wasn’t mentioned.  NATO took control of the International Security Assistance Force (ISAF) in Afghanistan in 2003, as a means to increase US government control.

2011 Libya:  NATO members (US, UK, France and Canada) intervened in a civil war through naval and air bombing. This left the country in turmoil and division, which continues today.

2014:  NATO agreed that a cyber-attack on any member state could warrant a collective response, including military action.  It can be difficult to identify the source of cyber-attacks.  So this NATO agreement provides a flexible pretext to attack any insubordinate country.

2021 Outer space:  At its 2001 summit, NATO extended the Article 5 collective defence clause to include military attacks in or from outer space.

2021 Iraq again:  NATO decided to expand its anti-ISIS training mission in Iraq.  This defied the country’s Parliament, which in 2020 had demanded that foreign troops leave the country.

2022 Kurdistan:  For several decades, NATO member Turkey has sought to delegitimise and destroy the Kurdish freedom movement as a ‘terrorist’ force.  This year the Turkish military has intensified its illegal attacks in predominantly Kurdish areas across the Iraqi border, with tacit support from NATO.  It sees the movement as a threat to Western domination of the region.