How Can We Achieve a ‘Progressive’ European Union? 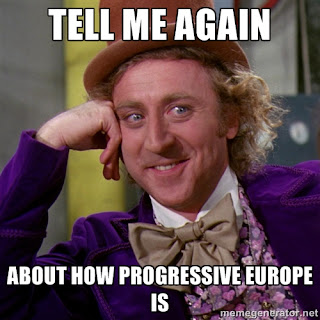 What I call the soft left in Britain appears to want to campaign for staying in a different European Union (EU) at the upcoming in/out referendum on the issue. But how can this be achieved realistically rather than being just a hollow mantra?

Caroline Lucas, the only Green Party MP, has taken this line. Writing on her website she states:

'We should be building a progressive case for Britain’s membership of a radically reformed union that works better for all of us. Completely reappraising the values and end goals that lie at the heart of the European Union’.

The EU environmental and employment legislation is worth keeping (and strengthening) as she says, but Cameron may well negotiate that away in the coming months and we would then be left with just a ‘free’ trading market and freedom of movement for citizens. Will lefties still vote to stay?

I think many on the British left can agree with the sentiments expressed by Lucas, but in practical terms what does she suggest as a way of keeping the good bits and getting the changes to the EU that we would like to see?

Man of the moment Jeremy Corbyn, front runner for the leadership of the Labour Party has expressed a similar view as reported in the New Statesman (quoting an interview in The Guardian). He is quoted as saying:

‘We cannot be content with the state of the EU as it stands. But that does not mean walking away, but staying to fight together for a better Europe’.

Haven’t we been trying this for years to no discernible effect?

Nigel Farage, UKIP leader, has got in on the act by suggesting he can work with Corbyn on a campaign to leave the EU which he suspects Corbyn is open to. I have my doubts that Corbyn will share a platform with Farage, although he has shared platforms with dodgy individuals before. It could be Corbyn will campaign for exit, particularly if the TTIP treaty is not significantly amended, but separately from UKIP.

Labour MEPs proposed an amendment in the European Parliament to exempt the NHS from TTIP, but this was defeated on the first vote, by social democrats in Germany and elsewhere. How can we work with ‘allies’ like this?

As Lucas notes, it is the national governments, especially Germany, France and the UK (to some extent), that set the agenda in the EU, so we need first for like-minded governments to be elected in most of the EU member states to get a positive change. Apart from this being unlikely, how is this any different from independent national governments, outside of the EU straightjacket, being able to cooperate to achieve this in a newly formed and reconstructed semi-union?

We might set a good example. At least we would only have the domestic right to fight off, not the whole EU juggernaut of neo-liberalism.

The Labour and Green Parties are completely impotent in the 'reform' negotiations, whilst Cameron is setting the agenda from the right. I can’t think of any strategy that would lead to us voting for anything other than worse EU membership terms at the referendum, to be held by the end of 2017 at the latest, the way we are going.

And this really is the rub. Lucas and Corbyn can demand a different Europe until they are blue in the face, but we won’t be voting on that in the referendum.

I’m beginning to think that this is all just wishful thinking, and there is no possibility of getting anything like the sort of EU we want, at this referendum at least.


But how about this for an idea? Might we on the left be better to say to Cameron that unless he comes back with reforms that are better for the people of Britain (and Europe), rather than the multi-national corporations, we will vote to leave?

Cameron wants to remain in the EU, it would at least put some pressure on him from the left if we said something like this, rather than mouthing well-meaning, unachievable platitudes about staying in.

Posted by Mike Shaughnessy at 06:23