UK Joining TPP – Bad for Trade, Workers and the Environment? 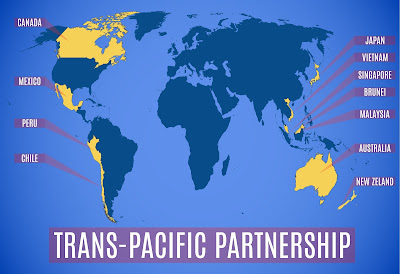 News comes this week that the International Trade secretary, Liam Fox, is exploring the possibility of joining the Trans-Pacific Partnership (TPP), when the UK leaves the European Union (EU). This trade deal is being renegotiated at the moment, since Donald Trump, the US president, pulled his country out of the deal.

The deal is now called the Comprehensive and Progressive Agreement for Trans-Pacific Partnership (CPTPP), with the eleven nations shown on the map above covering a similar sized population to the EU (around 500 million people), with participating countries all having a close proximity to the Pacific Ocean or South China Sea, as the name suggests.

As Fox has said, we will have to wait and see what the new, without the US, deal looks like, but he has been in preliminary talks with these nations. Would this be as good a deal as we have with the EU? Well many people seem to think not.

Currently, the UK exports only 8% of its total exports to these countries, which to put it into context, is less than the UK exports to Germany (11%) and the whole of the EU (44%). Some of these countries have very small economies, again to put it into context, New Zealand has a smaller economy than Greece. Some of the other countries involved, although with large populations, like Malaysia and Vietnam, are also quite poor. Other nations have shown an interest in joining like South Korea and Sri Lanka, but on the face of it, without the US participating, this doesn’t look too promising for trade.

Of course, if the UK joined, trade would increase as the partnership aims to promote trade between its members and to reduce tariffs to facilitate more trade, but it is hard to see it as in anyway equivalent to the UK’s current status in the EU. There are cultural differences too with the UK, with many of the countries involved, which tends to make trade less successful. There has been no clamour for this from UK businesses, which perhaps tells its own story.

The unions, in the UK and in TPP member countries are also against this trade deal as they fear it will lead to job losses.

The British Trade Union Congress’s (TUC) website has this to say:

Unions in the 11 countries currently still involved TPP are steadfastly opposed to the deal, because it would provide little in the way of protections for workers' rights. While workers in Vietnam might benefit because their rights are already so limited that even the safety net of ILO core labour standards would be an improvement, none of the 11 countries involved have better rights at work than the UK does currently.

TUC general secretary, Frances O'Grady, said such a move would be "scraping the bottom of the Brexit barrel." She points out that "trade unions around the world have opposed this deal because it allows labour abuses, it puts public services at risk and it gives too much control to corporations."

TPP has its own tribunal system where corporations can sue national governments, for things like not allowing public services to be run by private companies.

Then there is the environmental impact of the UK trading with such distant nations, rather than adjacent European countries. I have been unable to find data on the carbon emissions produced by the transportation of goods around the world, but you don’t need to be a genius to figure out that trading mainly within Europe has to lead to much less carbon being emitted than trading with these far away countries, in some cases, as far away as you can get from Britain.

New technology like 3D printers, will reduce the transportation of goods in the future admittedly, but not everything is going to use this technology. Take food and drink for example. If we are to import food produce from places like Australia and New Zealand, or wine, then this will have to be transported thousands of miles, with an obviously big increase in transportation emissions. In the case of fresh food, this will probably need to be transported by air, which causes the most damage to the environment.

I expect many in favour of Brexit don’t believe in man-made climate change, so will dismiss this argument, but anyone who understands these things, even in the most basic fashion, will know that it will make climate change worse, simple as that.


I wonder how those Green supporters of Brexit will square this one? I’ve not come across anyone making this argument from the Green side, in favour of the leaving the EU or not. Maybe a pro-Brexit Green can explain to me how this is good for the environment?