Does Caroline Lucas’ 3 Stage Plan to stop Brexit Stand Up? 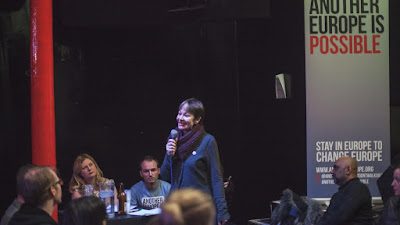 Caroline Lucas, the Green party MP for Brighton Pavilion and co-leader of the party, revealed her three point plan for the UK to remain in the European Union (EU) writing on politics.co.uk this week. Lucas, a long standing campaigner for the country to remain in the EU, laments the paucity of the Remain campaign in the run up to the 2016 referendum on whether or not we should stay in the organisation..

Too much reliance was put on people worrying about their finances, if we left the bloc, and the scare tactics employed by the Remain campaign. This tactic had worked at the Scottish independence referendum two years earlier, but it didn’t in the EU referendum.

Lucas says that the consequences of leaving the EU are only now starting to reveal themselves, with prices rising and shortages of nurses because EU nationals are have more or less stopped applying for these jobs. With the Tory government held hostage to a faction of hard right Brexiteers, hell bent on getting as complete a break as possible with our erstwhile European partners, and even the best possible outcome will be a much worse deal than we have now.

This is all true, but we did vote to leave the EU, although leaving could mean joining the European Economic Area (EEA), Norway style, or being treated as a ‘third country’ like Canada. Lucas favours a referendum on the outcome of the negotiations between our relationship with the EU, or staying in as we are currently. But how is this to be achieved?

Lucas suggests a three stage plan. In stage one, the stay in the EU message would be made by new faces. She is right, I think, that the likes of Tony Blair, George Osborne and Nick Clegg, have no credibility with the voters, as they are seen as symbolising the establishment that many people voted against. She also suggests organising at grass roots level, but this may be easier said than done on a wide-scale basis.

Stage two ‘must be a commitment to seriously tackling the underlying issues which fuelled Brexit,’ Lucas says. This is a key point. Yes, immigration played a part in the motivation of many Leave voters, but it wasn’t the only one. There was also a ‘stick it up the establishment’ attitude, although that should have been directed at the UK government more than the EU. Lucas goes onto make the argument of the EU as a limited, but possibly more powerful buttress against global corporations, who are the real thieves of our democracy. Essentially though, there needs to be repudiation of, and break with nearly forty years of neo-liberal ideology.

So far so good, but stage three looks to be the most problematic of all, getting the Labour party leadership on board. Lucas suggests that Jeremy Corbyn, the Labour party leader, should sign up to the Another Europe is Possible pan European movement, which seeks to reform the EU, to the benefit of its citizens, as opposed to global corporations.

The ambiguous signals about our future relationship with the EU, coming out of the Labour leadership, must stop insists Lucas, as push comes to shove. Corbyn says we will not stay in the European single market, once we leave the EU, but Kier Starmer, the shadow Brexit secretary, has said we will remain in the single market during a transition phase, ‘for as long as it takes’ to secure a good future arrangement with the EU. Lucas points out that 78% of Labour supporters want to remain in the EU. Fudging this issue has worked out quite well for Labour so far, but I agree with Lucas that they will have to take a side soon.

It is fair point too, that if we are to remain in the EU, it is essential that Labour backs the move, to give such a push credibility, and to tie in with part of stage 1 of this plan, to organise a grass roots movement in support of staying in the EU. Realistically, only the Labour party can do this on the scale that is needed.

Lucas cites the example of the recently formed community campaign unit in the Labour party, and with their membership numbers and general organisational infrastructure, this could be made a success of. It is hard to see a grass roots campaign achieving the critical mass to make it effective without Labour, but will they want to do this?

That is a hard question to answer, different people in the Labour party say different things about Brexit, but as the negative consequences of leaving the EU become clearer, and perhaps if the public shifts sufficiently in the remain direction, this may become a logical pathway for Labour to follow.


My feeling is that there is a long way to go with withdrawal from the EU, and pretty much anything could happen along the way. I am unconvinced that the EU will reform itself into the sort of community that Lucas describes, but maybe we should not discount even that in these volatile times.

Posted by Mike Shaughnessy at 10:15