UK Government Desperate for Trump Visit, but London Says No, No, No 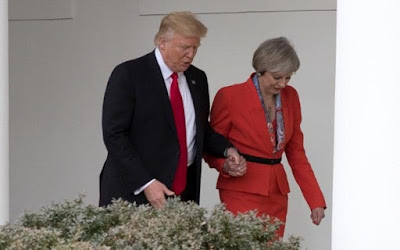 On same day that US President, Donald Trump, announced that he will not after all be coming to London next month, to open the country’s new embassy in the UK, he demonstrated exactly why he is not welcome in this diverse city. The Washington Post reported that Trump, in a speech to US senators, called African nations and others such as El Salvador and Haiti ‘shithole countries.’ He questioned why so many immigrants from these countries are allowed into the US, rather from (white) countries like Norway.

Trump’s remarks drew immediate criticism in the US, with widespread condemnation as being racist in nature. The outburst was also condemned by the United Nations and the African Union (AU), with the AU saying it was ‘clearly racist.’

Trump denied he used these exact words but did admit using some ‘strong language’ but democratic senator, Dick Durbin, who attended the meeting confirmed that the reports were entirely accurate. 'He said those hate-filled things and did so repeatedly,’ according to Durbin.

It doesn’t come as exactly a surprise that Trump would say such things, with his track record of support for right-wing, racist organisations. Trump failed to condemn white supremacists in the US who drove a car into a crowd of anti-racist protesters and his tweeting of praise for the neo-Nazi UK organisation Britain First. He tried to ban Muslims entering the US and of course has promised to build a wall on the US/Mexico border, to keep Mexicans out of the US. I could go on, the list of Trump’s racist diatribes is as long as your arm.

No surprise either then that Trump is not the sort of person that Londoners want polluting the city’s fine record on racial and ethnic integration and openness to the world generally. This is best symbolised by Sadiq Khan, the son of a Pakistani Muslim immigrant London bus driver, who is now the mayor of London.

Khan commented that Trump had ‘finally got the message’ that he was not welcome in London, after hearing of the cancellation of the visit. Khan said that if the visit had taken place there would have been a ‘huge’ demonstration in London, and implied that Trump had been scared off by the prospect of the backdrop a mass demonstration against him. Khan is right, there would have been a big protest had this visit gone ahead, Trump is very unpopular with Londoners.

Khan’s comments were immediately attacked by his immediate predecessor as London mayor, Boris Johnson, now the foreign secretary in the present Tory government. Johnson himself is no stranger to making racist controversial remarks, calling black people ‘pickaninnies with watermelon smiles,’ in the past.

True to form Johnson, using unusual words tweeted, ‘we will not allow US-UK relations to be endangered by some puffed up pompous popinjay in City Hall.’ For those unfamiliar with the word popinjay, the dictionary defines it thus:

‘a vain or conceited person, especially one who dresses or behaves extravagantly.’

This doesn’t sound like Khan in any way, but is a reasonably accurate description of Boris Johnson himself, but he is so vain and arrogant that this probably didn’t occur to him, who is commonly thought to be an upper class twit in the UK, or at least that is the most polite description I can think of.

But the reason that Johnson and the rest of the British government are so desperate for the visit to go ahead, at some point, is that they hope to conclude a favourable trade deal with the US, to replace the likely loss of our access to the European single market, after we leave the European Union. A craven posture for sure, and frankly, embarrassing, but the only thing that seems to matter to this government, is tearing the country away from our closest neighbours. If we have to suck up to racists in the process, then so be it, it appears.

The visit may still take place at some time, and in some way, that avoids widespread protest, especially in London. When George W Bush visited the UK at the height of the Iraq war, the arrangements for the visit were carefully planned. Bush was secretly taken to an ‘old English pub’ in the middle of County Durham in the north east of England, but a demonstration in London did go ahead anyway, but maybe with less impact.


If the visit does happen at some stage, then London will protest, and I will be there. But at least this has saved me having to turn out on a cold February day this year. The message from London to the US President will be ‘Trump, no, no, no.’ Which reminds me of the great, late, London born and Jewish singer, Amy Winehouse’s hit from 2006, ‘Rehab.’ A video of the song is reproduced below.