Climate Change - COP23: From the Gap to the Precipice 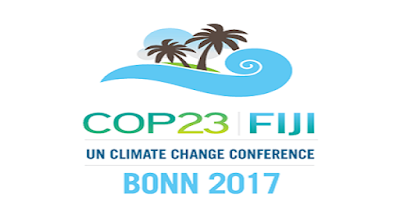 Written by Daniel Tanuro and first published at International Viewpoint

The Twenty-Third Conference of the Parties Signatory to the United Nations Framework Convention on Climate has just concluded in Bonn, Germany. It was an intermediate meeting between COP21 in Paris in 2015 and COP24 in Katowice (Poland) in 2018.

As we know, Paris resulted in a so-called ‘historic’ agreement concerning the level of global warming not to be exceeded at the end of the century (compared to the pre-industrial era): “stay well below 2°C and continue efforts not to exceed 1.5°C.”

Katowice (COP24) will be a more important step than Bonn: the signatory countries will have to say how and to what extent they will raise the level of their ambitions in order to bridge the gap between the greenhouse gas emission reductions at present planned in their national ‘climate plans’ on the one hand, and on the other the reductions that would be necessary overall to achieve the global objectives put down on paper in Paris. Belgium, for its part, does not have a climate plan worthy of the name.

Now, time is running out and the timetable is becoming tighter. The report says: “If the emissions gap is not filled in 2030, it is extremely unlikely that the target of not exceeding 2°C will be achieved. Even if the current NDCs were fully realized, the carbon budget for 2°C would be 80 per cent used up in 2030. Based on current estimates of the carbon budget, the carbon budget for 1.5°C will already be used up by 2030.”

As a reminder, the ‘carbon budget’ is the amount of carbon that can still be sent into the atmosphere with a probability X of not exceeding a rise of Y°C at the end of the century. The probability of 2°C and 1.5°C carbon budgets mentioned in the Emissions Gap Report is 65 per cent. (As a parenthesis: that’s not much: what do you do if you are told that the plane you are travelling in has a 65 per cent chance of not exploding in flight?)

Let’s go back to the question of deadlines. For the gap to be closed by 2030, measures must be taken by 2020 at the latest – in three years – and they must multiply by three emission reductions in the NDCs. The year 2020 is the first date scheduled in Paris for the adaptation of NDCs to bridge the gap.

To prepare for this crucial negotiation, the governments have planned a process called “facilitative dialogue” that begins in 2018. The UN report on the gap writes in black and white: “The facilitative dialogue and the 2020 revision of the NDCs are the last chance to close the emissions gap in 2030.”

Given the extent of the efforts needed to be in line with the Paris objectives and the extremely short time frame in which these efforts must be decided and effectively implemented, we should be talking not about a gap, but about a precipice.

Is it possible to bridge the gap – and not to fall over the precipice? Once again, the answer to this question is twofold: technically, yes. In the context of capitalist productivism, no.

The United Nations Framework Convention on Climate Change, adopted in 1990 in Rio, set the goal of not exceeding a “dangerous level” of global warming. It took twenty-five years and twenty-one COPs to decide to quantify this dangerous level: not to exceed 2°C and “continue efforts (sic) not to exceed 1.5°C.”

Given this slowness, it is necessary to be naive or very optimistic to think that two years will be enough now for the governments of the world to agree on the measures to be taken to multiply their efforts by three in order to respect the objective of 2°C, and by four to respect that of 1.5°C (in fact, the one that should absolutely be reached). Twenty-five years after Rio, global emissions continue to rise.

Admittedly, they increase only slightly, (0.9 per cent, 0.2 per cent and 0.5 per cent respectively in 2014, 2015 and 2016)… but they increase… whereas they should decrease very strongly and very quickly! It is certainly positive that the United States is very politically isolated on the climate issue, on the one hand, and on the other that some states of the Union (California in the front line) openly challenge Trump and his clique of climate criminals. Nevertheless, the U.S. withdrawal weighs on the negotiations.

This withdrawal will make it even more difficult to bridge the gap. The Nationally Determined Contribution of the U.S. consisted of a promise to reduce emissions by 2 gigatonnes of CO2. These 2 Gt are equivalent to 20 per cent of the very insufficient effort made by the NDCs as a whole. They are therefore to be added to the measures to be taken within three years.

It should also be noted that the U.S. is withdrawing without really withdrawing: present in Bonn, they continued – as under Obama – to put the brakes on the green fund for the climate. As a reminder: $100-billion a year that the developed countries have pledged to make available to the South from 2020, for the adaptation and mitigation of climate change, for which the rich countries are mainly responsible and the poor countries the main victims.

This green fund was decided at COP16 in Cancun in 2010 but the goal of one hundred billion is very far from being reached (to put it mildly). Seizing the occasion, other countries – the European Union in particular – have used the pretext of the U.S. attitude to avoid answering the concrete questions of the countries of the South and NGOs: How much money? When? In what form (donations or loans)?

The truth is that, from COP to COP, world capitalism continues to bring humanity closer to the precipice. Faced with this alarming situation, they try to reassure us by picking out figures on the increasing share of renewable energy in the ‘energy mix’. This increase is indeed very fast, and it will accelerate in the coming years, because the electricity produced by renewables is globally less expensive than the energy produced by burning fossils.

However, these reassuring speeches mislead us, because the indicator to be taken into account is the decrease in emissions, not the rise in the share of renewables. But as long as we do not question growth, therefore the race for profit, the share of renewables can increase at the same time as increasing greenhouse gas emissions, and that’s exactly what has been happening for about fifteen years.

How will capitalism get out of this huge problem? For Trump and the criminal cretins of his kind, the question does not arise: the catastrophe that is coming is either natural or a punishment that God is inflicting on humanity for its depraved mores. Let us pray, my brothers… And in both cases, woe to the poor!

But the others, the spokespersons of capital who do not take refuge in climate-negationism, who know that the threat is real, terrible and that the catastrophe is already in progress, what will they do to try to meet the challenge? What will they do when they realize that it is impossible to bridge the gap because capitalism cannot do without growth? They will join in with the geo-engineering in the hope, all the same, of avoiding tipping over the precipice.

Significantly, for the first time, the UN report on the emissions gap includes a chapter on negative emissions technologies, i.e. technologies that would remove carbon from the atmosphere “just in case” emissions reductions continue to be insufficient to meet 2°C – 1.5°C. It is more and more obvious that the reservation “just in case” is a formula of style to avoid revealing the brutal truth: despite all its technical and scientific means, humanity is heading for disaster because of the race for profit imposed by a minority of the population.

But let us go back to the negative emissions technologies. Some of these technologies are worthy of sorcerers’ apprentices. This is particularly the case for bio-energy with carbon capture and sequestration (BECCS), in other words the production of electricity by combustion of biomass as a replacement for fossils, with capture of CO2 and geological storage of it.

For BECCS to have a significant climate impact, it would require huge amounts of water (3 per cent of fresh water used for human purposes today) and very large areas devoted to industrial energy crops. Clearly, we must choose between the plague and cholera: either competition with food production, or a terrible destruction of biodiversity (I mean: even more terrible). Or both at the same time.

We are told that other technologies are soft: afforestation, reforestation, soil management conducive to carbon storage, restoration of wetlands, mangroves, etc.

That’s right, they are soft in themselves. But experience shows that soft technologies in themselves can have very harsh social effects when they are driven by the pursuit of maximum profit and market expansion. The capitalist logic already shows how indigenous peoples are cut off from the forest in the name of the climate (REDD, REDD+, etc…). This can only be accentuated within the framework of a generalization under capitalist management of ‘soft’ technologies with negative emissions.

However, within the capitalist framework, soft technologies will not be enough. They could be sufficient, but they will not be sufficient in this context because they are less interesting from the capitalist point of view than BECCS. In fact, BECCS offers markets to heavy industry and allows capital to perform a dual operation: sell electricity, on the one hand, and on the other be paid by the community to remove CO2 from the atmosphere.

Interesting in this respect: we learn from a paragraph of the Emissions Gap Report that it is still possible to stay below 2°C of global warming without resorting to bio-energy with carbon capture and sequestration. Why, then, do more than 90 per cent of the transition scenarios developed by scientists rely on the deployment of this technology? Because most scientists who work on scenarios consider that the law of profit is a natural law, as inevitable as the law of gravity.

There is nothing, absolutely nothing to expect from the COP negotiators. Their soothing and self-satisfied discourses are only meant to lull people to sleep. Rescuing the climate in a framework of solidarity depends solely on our ability to fight and, through our struggles, to lay the foundations of an alternative social logic to that of profit.

Daniel Tanuro is a certified agriculturalist and eco-socialist environmentalist, writes for La gauche, (the monthly of the LCR-SAP, Belgian section of the Fourth International).

Posted by Mike Shaughnessy at 09:55