Tories aim to portray themselves as Inclusive and Green – Are they having a Laugh? 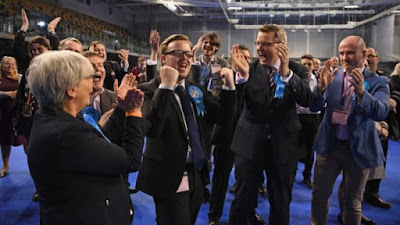 With apparent mystery surrounding the true number of members that the Tory party has now, with new Chair of the party, Brandon Lewis, admitting they did not know. He puts this down to records being kept at local level, and not being nationally held, but did not dispute that the membership total had plunged to a rumoured 70,000.

In September last year, Conservative Home, the website for Tory activists, estimated Tory party membership at around 100,000, after a small spike in new members after the EU referendum, which appears to have been more than cancelled out by remain voting Tories leaving the party.

These are the latest available membership estimates for UK (mainland) political parties:

Although membership of all of the main political parties has been declining for decades, there was a surge in the membership of the SNP after the Scottish independence referendum in 2014, followed by a Green surge in England and Wales in the 2015, prior to the general election, and a huge surge in Labour’s membership during and after the party’s leadership election later that year. A yearning for something different, particularly from younger people, it seems.

By contrast, a report by Tim Bale's Mile End Institute at Queen Mary University of London suggested at least 44% of Tory party members were over 65 and 71% were male.

All of which explains the spin around the recent government (non) reshuffle, with the Tories wanting to ‘look like the nation they seek to represent.’ The facts do not support the hype though.

According to Left Foot Forward, just five of Theresa May’s 22 Cabinet ministers are women, the same number as before the reshuffle. Men still account for almost 70% of ministers. May’s new Cabinet contains also only one ethnic minority minister, and just one who is openly LGBT.

According to the Sutton Trust, 34% of Theresa May’s new cabinet were privately educated – an increase from her first cabinet in 2016 (30%) – while 24% of the new cabinet attended selective state schools.

Clearly, the Tories are trying to spin themselves as in some way diverse, but the truth is nothing much has changed in the make-up of the government, and this is just a public relations exercise.

Meanwhile, Priti Patel, the former International Development secretary, writing on the Conservative Home website says that there is an ‘essential need for us to become a grassroots movement once again.’ The Tories have not been anything like a grass roots movement since the 1950s, when they had around 3 million members, so this looks to be a tad over ambitious.

James Cleverly, the new deputy chair of the party suggests, somewhat bizarrely, writing on the same website, that the Tories can take a leaf out of the online game Candy Crush’s book, because it is popular, especially with younger people. They are truly getting desperate.

But it’s not just new members that the Tories are trying to woo, they are looking for new voters as well. This is what is behind Theresa May, the prime minister, making a speech about the environment today. Michael Gove, the Environment secretary, has been the warm up man in this attempt to soften and broaden the Tories appeal, with a series of speeches and announcements on green issues over the last couple of weeks. They must have been watching Blue Planet 2.

This tactic worked to some extent when David Cameron was Tory leader, when he was trying to detoxify the party’s image. Remember the ‘Go Green, Vote Blue’ slogan, which was immediately dropped when the Tories got into government, and derided as ‘green crap?’ At the same time, this government was slaughtering hundreds of thousands of badgers, making it easier for businesses to get planning permission for fracking, and harder to get for wind farms. The Tories continually break EU limits on clean air and beaches. Will anyone fall for this cynical ploy again?

I’ll tell the Tories what they need to do to attract new and younger support. Drop the hard Brexit nonsense, scrap tuition fees, build some truly affordable housing, fund the NHS properly and reduce the voting age to sixteen.

Of course, they won’t do any of these things but the Tories problem runs deeper, they are just not perceived as ‘cool’ and they never will be. There are pretty good comedians though.

Posted by Mike Shaughnessy at 09:25