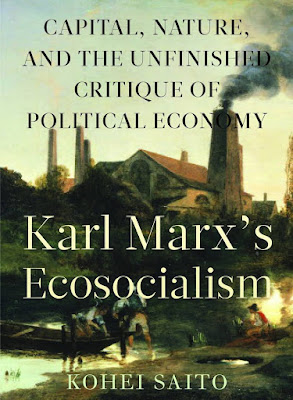 In the 135 years since his passing, many commentators on Marx’s work have maintained that his view of humanity’s relationship to the Earth is “Promethean,” i.e. that mastery over nature is a key step to achieving the communist state. A counter-tendency in Marxian analysis, however, led first in the 1960s and 70s by scholars like Raymond Williams and Istvan Meszaros, then in the past twenty years by a new generation including John Bellamy Foster and Paul Burkett, has maintained that ecology’s conflict with capitalist relations is central to understanding Marx’s political economy.

Kohei Saito, author of Karl Marx’s Ecosocialism, belongs firmly in the latter camp. For Saito, associate professor at Osaka City University, Marx is not simply an economist who sometimes refers to nature; he insists that “it is not possible to comprehend the full scope of his critique of political economy if one ignores its ecological dimension…Marx actually deals with the whole of nature, the ‘material’ world, as a place of resistance against capital, where the contradictions of capitalism are manifested most clearly.”

Drawing extensively upon Marx’s “excerpt notebooks” that have been published as part of the ongoing research project Marx-Engels-Gesamtausgabe (aka MEGA), the author paints a compelling portrait of Marx first as a young man with a philosophical conviction of how capitalist relations alienate us from nature, then as a determined student of natural sciences, eager to find scientific verification of the ecological contradictions of capital.

In Part One, “Ecology and Economy,” Saito traces the systematic development of Marx’s ecological critique from the Paris Notebooks of the 1840s through the mature work of Capital. Marx’s Paris work (a portion of which was published in the twentieth century with the title Economic and Philosophical Manuscripts) shows a young scholar still under the philosophical influence of Feuerbach and the Young Hegelian school. He develops his fourfold definition of alienation under capitalist relations: within capitalism, Marx claims, one becomes alienated from the product of the one’s labor, from the labor process itself, from one’s free and creative “species-being,” and from one’s fellow workers.

Marx proposes overcoming these forms of alienation through the abolition of private property (the product of alienated labor), so that humans can relate to nature in a free, cooperative manner. While he arrived at valuable insights in this period that laid the groundwork for later ecological thinking, Marx at this point was still enamored of an ahistorical, Feuerbachian idealism that he would need to transcend in order to make way for the “scientific socialism” informing his later work.

The turning point in Marx’s materialist critique came with The German Ideology (1846), manuscripts he co-wrote with Friedrich Engels. Here Marx shifts from a purely philosophical approach to ecology, into a “natural scientific” one based on a historical understanding of evolving relations between humans and nature. He begins using the term “metabolism”—a concept first used in the nineteenth century by physiologists, later by philosophers—to describe this dynamic interchange, where nature becomes man’s “inorganic body” upon which he depends for survival.

Over the next decade, culminating in his writing of the Grundrisse in the mid-1850s, Marx refined his understanding of the concept to posit a general metabolic tendency of capital: in aiming for continuous expansion, capitalism exploits natural forces--including human labor power--in search of cheaper inputs; but this process deepens capitalism’s own contradictions (deforestation, carbon emissions, biodiversity loss, etc.), all of which have intensified since the time of Marx’s writing. Human civilization will likely become impossible long before capital accumulation ceases due to ecological degradation; therefore, capitalism’s metabolic relations are incompatible with sustainable human development.

Saito’s analysis is also valuable for the emphasis it gives to the concept of “reification” as a keystone of Marx’s ecosocialism. While reification perhaps receives its fullest expression in the chapters on “The Working Day” and “Machinery and Large-Scale Industry” in Volume 1 of Capital, Marx developed it gradually as part of his ecological critique. In brief, reification refers to the process whereby private producers exchange commodities whose value is determined as the sum total of abstract labor used in their production.

Nature’s materials are molded into economic forms, and those forms become ossified into “things,” but these material things can never be fully subsumed under capital. Thus, capital threatens the continuity of man’s metabolism with nature, by reorganizing nature to extract the maximum amount of abstract labor; reification insures that society can be produced—and reproduced—only through the mediation of value. Saito clarifies the point nicely: Marx does not simply claim that humanity destroys the environment.

Rather, his ‘materialist method’ investigates how the reified movement of capital reorganizes the trans-historical metabolism between humans and nature and negates the fundamental material condition for sustainable human development. Accordingly, Marx’s socialist project demands the rehabilitation of the humans-nature relationship through the restriction and finally the transcendence of the alien force of reification.

In Part II, “Marx’s Ecology and the Marx-Engels-Gesamtausgabe,” Saito scrutinizes newly available material from Marx’s natural science notebooks, showing the many writers Marx studied carefully for years to refine his ecological critique of capital. Saito concedes that there is some evidence that Marx’s earlier thinking about nature was “productivist,” i.e., he was optimistic that scientific and technological advances could overcome nature’s limits.

His excerpts from the earlier editions of Justus von Liebig’s Agricultural Chemistry and James F.W. Johnston’s Notes on North America, both published in the 1850s, strike a hopeful note that David Ricardo’s law of diminishing agricultural returns could be overcome through improved soil science and land management. Liebig’s earlier work assumed that productivity could be improved through the use of synthetic fertilizers (a convenient position, perhaps, for an agronomist with a sideline capitalist business as a manufacturer of chemical fertilizer!).

The turning point for both Liebig and Marx, however, was the publication of the seventh edition of Agricultural Chemistry in 1862, where Liebig adopted a darker theory of “robbery agriculture” under capitalist relations. Liebig now posited a “law of replenishment,” in which soil needs a mixture of organic and inorganic elements to maintain productivity. While organic elements can be replenished continuously through the atmosphere and rainfall, the loss of inorganic (“mineral”) elements must be minimized as they are much harder to replace under the pressure of capitalist production. Reading Liebig’s seventh edition “deepened his [Marx’s] insight that nature cannot be arbitrarily subordinated and manipulated through technological development.

There are insurmountable natural limits. Marx’s demand for the rational regulation of human-nature metabolism sprang from the recognition of natural limits, as well as that social production must be radically reorganized to achieve sustainable human development. Capitalism, Marx realized, is inherently inimical to this more rational metabolism, as it mediates all relations through reified values.

Liebig’s idea of robbery agriculture became one source of inspiration for Marx’s theory of a “metabolic rift” between town and country in the first volume of Capital (discussed at some length by John Bellamy Foster in his book Marx’s Ecology). But Saito’s access to the MEGA notebooks reveals that following the publication of Capital in 1867, Marx began reading another agronomist, Carl Fraas, whose work—especially his 1866 book Agrarian Crises and Their Remedies—both modified his previously unqualified praise of Liebig, and opened a new scientific window for understanding capitalism’s ecological contradictions.

Fraas espoused an “agricultural physics” counterpoised to Liebig’s “agricultural chemistry”; while he did not discount the importance of much of Liebig’s work, he believed that climatic factors were of more importance than chemical ones to soil productivity. Fraas writes at one point that cultivation can take place without exhaustion in a favorable climate even if nutrients are not returned to the soil in a metabolic cycle by humans.

Fraas also maintained—particularly in another of his studies, Climate and the Plant World Over Time—that deforestation was the primary driver of climate change, as it inevitably led to rising temperatures and lower humidity (i.e., desertification), tracing this as an historical tendency in the civilizations of Mesopotamia, Egypt and Greece.

The problem, according to Fraas, is that civilization consumes an enormous amount of wood in activities like building ships and houses, as well as producing iron and sugar; therefore replanting deforested land is often not feasible. Saito observes that “Marx, reading Fraas’s work, rightly thinks it necessary to study much more thoroughly the negative aspect of the development of productive forces and technology and their disruption of natural metabolism with regard to other factors of production.”

Much work remains for future scholars to plumb the development of Marx’s ecosocialism. As Saito points out, the MEGA project has to date published Marx’s excerpt notebooks only up to 1868; notebooks that track his developing ecological awareness over his final fifteen years await full publication of the fourth section of the MEGA. Nevertheless, “Karl Marx’s Ecosocialism” is an indispensable addition to the burgeoning literature on Marxian ecosocialism.


Kohei Saito provides an intellectually rigorous, yet accessible, guide for readers not only as to why healing capital’s ecological rifts was essential to Marx’s socialist project, but also how Marx’s decades-long reading project in the natural sciences informed his analysis from The German Ideology onwards. “Marx did not answer all of the questions and did not predict today’s world,”

Saito writes in his conclusion, “but it is does not follow that his ecology is of no use today. It is undeniable that his critique of capitalism provides an extremely helpful theoretical foundation for further critical investigation of the current ecological crisis, and that with regard to ecology Marx’s notebooks can prove their great importance.” Ecosocialists everywhere should appreciate Saito’s meticulous elucidation of Marx’s evolving understanding of capital’s incompatibility with the earth.