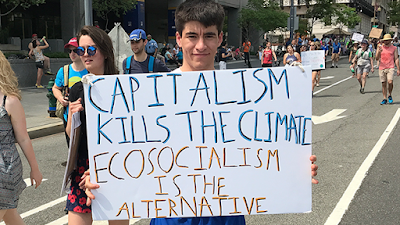 How to respond to the growing systemic crisis in Europe and globally? This is a combination of multiple crises – political, social, climate and environmental – requiring systemic alternatives. System criticism is not enough. The conference is a contribution to the debate on if and how to break with the capitalist system underlying the crises and to develop red and green alternatives?

10:00-10:45  Daniel Tanuro, Belgium, author of ‘Green Capitalism: Why it can’t work’ and contributor to the book ‘Økosocialisme – fra systemkritik til alternativ’ (Solidaritet, 2015), ecosocialist and writer in La Gauche, certified agriculturalist.

“Urgency of an Ecosocialist Alternative. How to fill the gaps in emissions and in consciousness?”

There is an objective gap between the path of emissions reduction compatible with a 1.5°C temperature increase on the one hand, and the projections based on the Nationally determined contributions (NDC) on the other hand. There is also a huge subjective gap between the ecosocialist consciousness needed to break with the productivist logic of capitalism, on the one hand, and the alienated consciousness of the vast majority of the population, on the other hand. Bridging the first gap entails bridging the second. What strategy for ecosocialism?

“Alternatives to the ecological crisis, the food crises and the climate crisis”

14:15-17:00 Parallel seminars on 1) To combat climate change – the role of ecosocialism and ecofeminism; 2) Our common goods – reclaiming public services

Seminar 1: To combat climate change – the role of ecosocialism and ecofeminism

“Ecofeminist views to confront the Anthropocene“

Asbjørn Wahl, Norway, author and trade unionist, director of the Campaign for the Welfare state

”The role of labour in the fight against climate change”

Action to combat climate change will require major societal transformation. We have most of what is required in terms of technology, knowledge and competence to avert a climate disaster. What we lack is the social power to translate words into action. The role of organized labour will therefore be decisive. The climate struggle will have to be unified with the social struggle.

“Left politics and Commons-movements in Europe”

The impressive and rich diversity of commons initiatives all over the world can be seen as acts of resistance against exploitation of nature and people, or more specific: against the continuous and ever-growing greed of reactionary politics and capital for privatisation of natural resources. It’s time to discuss strategies on European level: Commons as one dimension of initiatives to reclaim a social, ecological and democratic Europe.

“Earth Incorporated: The impacts of trade and privatisation on nature”

Nature, biodiversity and ecosystem functions are increasingly included in trade agreements as well as turned into aims of financialisation and off-setting with severe environmental and social consequences.

Access to and provision of public services play a key role in inequality, whether reducing or increasing the gaps in society. How the fragmentation of education, health and social security is affecting the UK and those who deliver these services.

The Equality Trust was launched in 2009 by Bill Kerry, Richard Wilkinson and Kate Pickett after the publishing of “The Spirit Level – Why Equality is Better for Everyone” (In Danish: “Lighed – Hvorfor alle klarer sig bedre i mere lige samfund”).

The intention is to make workshops around each of the topics of the talks of the conference, and possibly build working groups  for ongoing work on these issues.

17:00-18:00 Concluding debate in plenary between the speakers of the conference and the participants on the main topics of the day.

More information about the conference here.

Posted by Mike Shaughnessy at 04:34