Is the Tory Party in Terminal Decline? 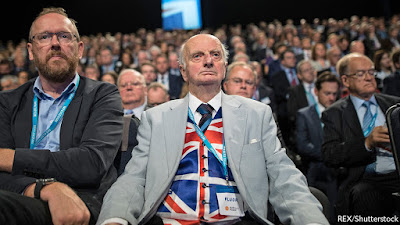 It is not just a lefty like me pondering this matter, the Tories are openly posing this question themselves. Rumours are circulating that membership has fallen to as low as 70,000, and this is causing some soul searching in the party. Tory MPs like Nick Boles and Nicolas Soames, admittedly from the liberal wing of the party, have publicly urged the prime minister, Theresa May, ‘to up her game,’ with calls for a ‘big idea,’ a ‘vision of the future more uplifting’ that what we have seen from her so far.

It could be that they are just laying the ground work for replacing her as leader, but it is certainly true, try as she has, May, just doesn’t inspire anyone with her vague rhetoric, delivered in trade mark, robotic fashion. To be fair to May though, no one else in the party seems to be able to come up with anything credible either, save Michael Gove’s exhuming of previous leader David Cameron’s greening of their image. I think the Tories problems run much deeper though, than the present leadership.

May has made a number of speeches setting out her vision, from when she first became leader, on the back of the Brexit vote, in a speech outside 10 Downing Street, claiming she would defend the interests of ‘working people,’ ‘the left behind,’ and the ‘just about managing.’ Then there was the Lancaster House speech a year ago, where she railed against the ‘citizens of nowhere,’ meaning global corporations and their management and liberal thinkers more generally.

The latest attempt was a piece written for the Observer newspaper, last Sunday, titled ‘I will fine greedy bosses who betray their workers,’ pledging to toughen up company pension laws, in the wake of the Carillion scandal. Company executives loosened their rules around bonus payments to themselves, just before the company went bust, with a £500 million pounds deficit in their pension fund.

We heard this type of thing before the general election which went so disastrously for the Tories and May herself. No one really believes anything much will change, it is just empty rhetoric. In last year’s general election, the Tories only finished as the largest party because some Labour supporters who voted for Brexit, backed the Tories to deliver the hardest form of leaving the EU. It was a double edged sword though, with many Remain voters deserting the Tories, and mainly backing Labour, and May duly lost the small Parliamentary majority she had inherited.

James Frayne a Tory member and also of the think-tank, Policy Exchange, writing on the Conservative Home website for party activists, identifies six barriers to people voting Tory. He says these are, healthcare, being a party for the rich, public service cuts, cultural hostility, liberal social attitudes and a lack of positivity in campaigning. All of these things do make it difficult for the Tories to connect with some, mainly younger and Metropolitan voters. In London, for example, the Tories were nearly completely wiped out in last year’s general election.

Frayne concedes that in the short term anyway these barriers may be insurmountable, but thinks that a proper audit of these areas needs to be undertaken urgently. Lord Ashcroft, the pollster and former deputy chair of the Tory party, also writing at Conservative Home, says that the Tories can’t rely on Brexit to win them the next general election. Apart from making a complete mess of Brexit, at some stage a post Brexit deal with the EU is bound to upset some of their MPs and supporters, perhaps all, whether it is soft or hard.

Ashcroft concludes his piece by saying, ‘the post-Brexit political landscape won’t be shaped after the deal is done, it is being shaped now. Without some ideas, the Tories will surrender much of it to the left without firing a shot.’

So, much angst in the Tory party about future prospects then, and they are surely right to worry about their unpopularity with voters under 50 of years of age. The longer we wait for the next general election, the more there will be of younger voters coming onto the register, and more elderly ones leaving the register, by dying.

The problem as I see it for the Tories, is of ideology, that is, private markets are the solution to everything. Before Margaret Thatcher became Tory leader, it was a quite pragmatic party, bending with the times, although always the party of the establishment. Post Thatcher, the Tories became very ideological, neo-liberal front runners at the time. Political cycles do run their term, and are replaced by another, different orthodoxy, and perhaps we have reached this point now.

Harold Macmillan, as Tory housing minister and prime minister built hundreds of thousands of council houses, and was popular amongst the working class for it. This pragmatism is now nowhere to be seen.

Take the housing crisis, for example. Selling off council houses, at as much as a 50% discount, in the 1980s was very popular with people living in good properties, in reasonably good areas. The house price inflation that we have had over the last 30 years, has also been good for those who own property, older people. These older people benefited from the welfare state, with good housing and free higher education, but now the less wealthy younger people, are being shut out from these things.

The Tories approach to the housing crisis, is a help to buy scheme which will cost billions to the tax payer, but benefit less than an estimated 4,000 people. The slight raising of the cap on what local authorities can borrow to build houses, in as yet undefined areas ‘of high demand’ is again piecemeal, given the scale of the housing crisis.


But we are back to market ideology again, because you ‘can’t buck the market,’ as Thatcher was fond of saying. But the market is failing for all to see in housing provision. If the Tories don’t change their ideology they won’t be able to attract younger voters, and they may become largely an ageing, white, rural party, rather than a truly national party.