Carillion Collapse – If this was Iceland, those responsible would be in Jail 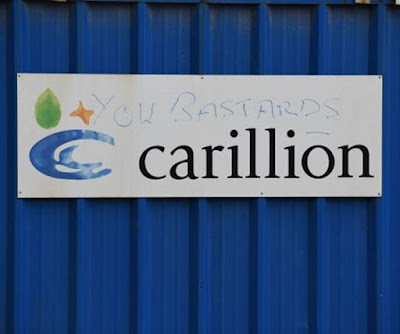 The collapse into administration of the construction and out sourcing business Carillion, has caused waves across the political and business establishment. Tens of thousands of employees will lose their jobs and pensions, small businesses will go bust through non payment of debts and shareholders and taxpayers will lose money. Carillion employees will hardly have been cheered to hear that the government had set up a Jobcentre plus helpline, to help them find new work.

The company had 450 government contracts ranging from HS2 to providing school lunches, building hospitals, roads and maintaining 50,000 homes on military bases. They also had several private construction contracts in the middle-east.

The political fall out might lead to resignations from the government, who have plenty of questions to answer on why they kept giving contracts to a company that was known to be struggling financially? The government may also reflect on the irony of Carillion’s chairman, Philip Green, advising them on corporate responsibility. There might also be a re-think on whole practise of Private Finance Initiative (PFI) deals and the out sourcing of public services.

The government has said that there will be an investigation, where the conduct of directors in charge at the time of company's failure and previous directors will be examined. The Business secretary, Greg Clarke said ‘any evidence of misconduct will be taken very seriously.’ We heard similar noises after the 2008 financial crisis, but nothing really materialised. Whether it will be different this time we will have to wait and see, but I am sceptical.

The first thing that springs to mind, is what was going on with the accounting and auditing (by KPMG) of Carillion, that made it justifiable to be paying out big dividends as recently as last year, to shareholders and bonuses to senior managers, who are no doubt shareholders too?

The company issued the first of three warnings on its lack of financial health in July of last year, why was this not acted on, by the management and indeed the government? Why were they allowed to pay £83 million in share dividends last year, when their pension deficit was £580 million?

The 2008 financial crash was taken very seriously in Iceland, where politicians resigned from their posts, including the prime minister, and directors of the banks involved were imprisoned, which was made possible by the Iceland Parliament enacting new legislation to enable this. Will this happen in the UK over the Carillion affair? I somehow doubt it.

The whole area of PFI’s, Public Private Partnerships (PPP’s) and the outsourcing of public services to private contractors needs to be ended. An idea that originally originated in the US and was first introduced to the UK by the Tory government led by John Major in the 1990’s. The first scheme in the UK was the Isle of Skye road bridge, which has since been taken into public ownership by the Scottish government, after the Scottish Parliament was first established in 1999.

The new Labour UK government, elected in 1997, picked the PFI ball up and ran with it, signing hundreds of deals for the construction of new hospitals and schools, which had the advantage of the spending not being counted against public sector borrowing, but in the long run the taxpayer has paid considerably more than would have been the case with conventional government contracting. It has been quite accurately compared to buying a house on your credit card, with extortionate fees payable for usually 25 years, whether or not the facility is needed or used.

Out sourcing of public services goes back even further to the days of the Thatcher Tory government, and almost always leads to worse pay and conditions for workers, and not necessarily good quality services - think of the railways! These companies tend to avoid paying UK taxes too, by off shoring their headquarters in tax havens. And as we have seen with the Carillion case, the nature of these deals is that the profits are privatised but the risks are nationalised. So much for the entrepreneurial private sector, then.


Although there will always be government contracts for building infrastructure, these type of deals are terrible for UK tax payers and service users alike. These PFI/PPP and outsourcing service provisions should to be dispensed with, and provided without excessive profits for these private companies, and the risks to the public purse. We will likely get better, and value for money public services into the bargain, but I wouldn’t hold your breath. The current system is effectively a corporate welfare state.