TTIP is a ‘revolution against international law’, says UN Expert 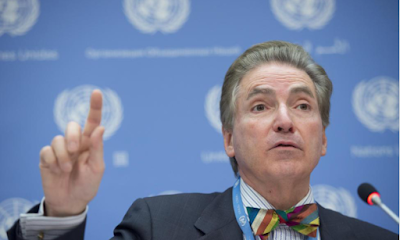 “Globalization cannot be allowed to become the grand global casino where investors rig the system to guarantee that they always win.” UN human rights expert Alfred-Maurice de Zayas (pictured above) doesn’t mince his words when it comes to the new generation of trade deals like TTIP.

He believes the corporate court system at the centre of the deal, which allows foreign companies to sue governments in secret “is tantamount to a revolution against law, it is retrogression in terms of legality and predictability, a no-man’s land of arbitrary arbitrations.”

De Zayas was speaking to the UN Human Rights Council and his transcript is well worth reading in full. He believes the privileges which big business is gaining through trade agreements like TTIP “constitute an attack on the very essence of sovereignty and self-determination, which are founding principles of the United Nations.”

The ‘corporate courts’ system is “a Trojan horse” threatening “a privatized system of dispute settlement, outside and contrary to … the International Covenant on Civil and Political Rights.”

“Experience shows that many of the 608 arbitration awards that have become known,  have overridden national law and hindered States in the sovereign determination of fiscal and budgetary policy, labour, health and environmental regulation, and have had adverse human rights impacts, also on third parties, including a “chilling effect” with regard to the exercise of democratic governance.”

“An international order of sovereign and equal States … must not be undermined by private attempts to replace it with an international order ruled by investors, speculators and transnational enterprises lacking democratic legitimacy.. international investment agreements are usurping State functions as if the only rights were the rights to trade and to invest.”

What can we do about all of this? We’re constantly told by the British government that hundreds of such courts already exist and we’re trying to defy history. De Zayas disagrees:

“termination of international investment agreements may be a complex task, but much less problematic than, for example, dealing with armed conflict. The world economy has had to adjust time and again to advance the cause of human dignity.

“So it was with the prohibition of the lucrative slave trade, the abolition of slavery and decolonization, which were replaced by other economic models. … eventually investor–State dispute settlement will be recognized as an experiment gone wrong, an attempt to hijack constitutionality, resulting in the retrogression of human rights.”

To start off, de Zayas lays down straightforward guidelines for the British and other governments contemplating deals like TTIP. First, “ISDS should be abolished” as it has no place in a democratic world. He believes states must defy corporate court decisions that violate human rights and even suggests appealing to the World Court to prove “the invalidity of ISDS awards that are arbitrary and manifestly ill-founded.”

Second, government need to “conduct human rights, health and environmental impact assessments” and give maximum transparency to the negotiations which “must not be secret or ‘fast-tracked’”. Deals must not involve “unreasonable ‘survival clause’”, something which surely covers the 20 years it would take a government to withdraw from TTIP.

Finally de Zayas urges states to work together against this corporate coup, because a “democratic and equitable international order can only be achieved by States in international solidarity”.

Posted by Mike Shaughnessy at 05:50