For Nuclear's Cost, U.K. Could Have Six Times the Wind Capacity 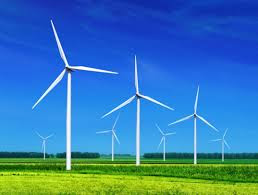 Britain could have six times the power-generation capacity for the same money by investing in wind turbines instead of the 24.5 billion-pound ($37.9 billion) Hinkley Point nuclear reactor.

That’s the conclusion of Bloomberg New Energy Finance, a London-based researcher that estimates the cost of power from renewables in the U.K. are rivaling fossil fuels even without subsidy. Wind easily beats the more expensive nuclear plant that Electricite de France SA is building with the support of investment from China.

The findings highlights the trade-offs Prime Minister David Cameron weighed in his decision to support EDF’s bid to build the first new reactors in the U.K. in more than two decades. In backing nuclear and maneuvering to draw Chinese funds in a deal due on Wednesday, Cameron prioritized reliability of supply and the impact on rural landscapes over cost.

The chart below shows BNEF’s estimates for what power would cost from new plants built using a variety of technologies. It shows a wide range for each, reflecting huge differences in fuel and construction costs in every nation. 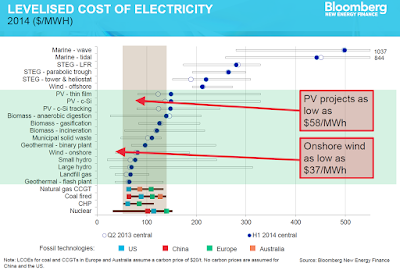 In some places, notably the U.K., wind is cheaper than nuclear. The new EDF plant at Hinkley Point will sell electricity for 92.50 pounds per megawatt-hour. That compares with lowest contract price of 79.23 pounds for supplies from onshore wind-power plants that the government awarded in February after a competitive auction.

Hinkley Point will supply 3.2 gigawatts of electricity to the grid. Spending the equivalent money on wind would give 21 gigawatts of capacity, said David Hostert, a wind energy analyst at BNEF in London.


But from there, the comparison breaks down. Nuclear plants run for months without a hiccup and over the course of their lives can supply power about 90 percent of the time. Wind only works when it’s breezy. The best new plants have a “capacity factor” of 35 percent. The entire fleet is around 25 percent, Hostert said.

Also, wind turbines take up more space, and Hostert said the U.K. isn’t allowing the biggest machines that work most efficiently. Cameron has vowed to stop support for new onshore wind farms, which some voters say are blight on the landscape.

The next chart shows the cost of power from new coal plants will rise in the next decades while renewables decline. 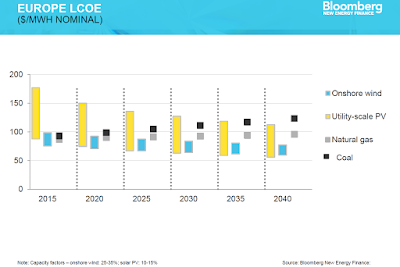 Myriad factors determine which technologies are most profitable. In addition to the wholesale power cost, developers must weigh grid connection charges, government subsidy mechanisms, restrictions on when each plant can sell electricity to the grid and whether there’s demand from customers.

All those variables change over the life span of the power plant, which can stretch for decades.

“Onshore wind today is already the cheapest form of energy generation in the U.K.,” Hostert said. “We see nuclear plants at $190 per megawatt-hour” compared with $85 for wind. “The wind industry could be able to compete without subsidies, but not if the playing field isn’t level.”