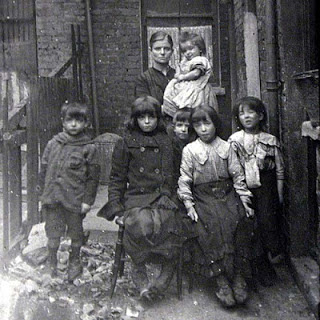 The Independent reports NHS statistics that show that cases of malnutrition have increased by 50% (from 4,883 cases to 7,366) since 2010, when the Conservative government (in coalition with the Lib Dems then) came to power in the UK. Other diseases from the Victorian era, including scurvy, scarlet fever, cholera and whooping cough have also increased since 2010.

The figures from the Health and Social Care Information Centre show that in the worst affected areas, Devon, Cornwall and the Isles of Scilly, 2.4 people out of every 100,000 were admitted to hospital with a primary diagnosis of malnutrition.

The Trussell Trust, which runs a national network of Food Banks estimates that tens of thousands of people are going hungry, even with their and others efforts to distribute free food parcels.

The two major reasons people give for going to food banks are benefits problems (delays, sanctions and changes) and low incomes. There's evidence to suggest that the former has been exacerbated by the government's 'crackdown' on benefits claimants and their changes to social security. The latter reason, which explodes the myth of people being able to 'work their way out of poverty', reflects the fact that wages have stagnated in real terms for a decade now.

Chris Mould, chairman of the Trussell Trust said: “We often see parents who are going without food so that they can feed their children, and these parents often struggle to afford enough nutritious food for their children, too.”

Older people are a another group with increasing levels of malnutrition. Dianne Jeffrey, of the charity Age UK said:

“Estimates suggest there are at least one million older people who are malnourished or at risk of malnourishment and cuts to social care provision mean many older people are being left to cope on their own.”

Meanwhile, parts of London have higher rates of tuberculosis than Rwanda or Iraq, according to a report by the London Assembly. One in three boroughs in the capital suffer from high rates of TB, with more than 40 cases per 100,000 people and some wards in Brent, Ealing, Harrow, Hounslow and Newham have rates of more than 150 per 100,000. The borough with the highest rate was Newham in east London, with 107 cases per 100,000 people. TB is often linked to homelessness, and there are an estimated over 7,000 homeless people in London.

This news comes amid the government’s defeat in the House of Lords over the introduction of savage reductions in working tax credits, where the Institute for Financial Studies finds 8.4 million working age households who are currently eligible for benefits or tax credits and who do contain someone in paid work, the average loss from the cuts to benefits and tax credits is £750 per year. Of this 3 million people will be affected by an even worse £1300 per year.

The facts make a mockery of the frankly absurd claim by the Conservative government that they are ‘now the party for working people’, if anyone was ever fooled by this rhetoric in the first place. Taken with the government’s aim to return to a nineteenth century industrial relations policy, through the Trade Union Bill, it is clear where their sympathies lie, and it is not with low paid workers.


How shameful, that a country as rich as this one, should be regressing towards Dickensian levels of health and poverty in the twenty first century.

Posted by Mike Shaughnessy at 11:18