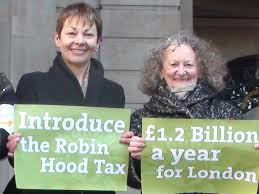 With news that Green Party peer Jenny Jones has joined the new cross party campaign, to convince the public to vote to leave the European Union at the forthcoming UK referendum on the matter, a division has opened up in the party. The campaign group is named, rather straightforwardly, Vote Leave.

This shouldn’t come as a great surprise to Jenny Jones watchers. As recently as this July she wrote a piece in The Ecologist magazine entitled ‘Something Rotten in the State of Europe’, in which she says:

Just as Syriza's negotiating position has been fatally undermined by its refusal (in my view deeply mistaken) to countenance leaving the Euro, so we - Green and progressive voters - will lack any leverage so long as we tolerate a bad EU, for fear of something even worse.

And make no mistake: a pro-TTIP European Union, eager to impose the imperatives of capital against people, determined to evacuate democracy in Greece and other member states of its meaning, is not an EU we should wish to be part of.

The formal position of the Green Party is to vote to remain in the EU and to try and reform it into a better, people’s Europe, but this seems to be a remote possibility at best. There are quite a few Eurosceptic voices in the Green Party, but Jenny Jones is the most prominent so far to come out for leaving the EU.

Jones comes from the ‘eco-liberal’ wing of the Green Party and this philosophy has a streak of anarchism running through it, which I think is where this anti EU sentiment emanates from. Anti-corporate, anti-big state feelings, as against a small state, eco-friendly localism agenda drives this desire to abandon the supra-national state.

In the other corner are the eco-social democrats, whose most prominent member is the Green Party MP Caroline Lucas, who has many cheerleaders in the party who will no doubt follow suit. An ex Member of the European Parliament (MEP), Lucas wants the UK to remain in the EU, and as aforementioned to change the organisation into a better one (unspecified how exactly), at pretty much whatever the cost. The cost could be high too, as the Prime Minister, David Cameron, negotiates the good bits of the EU away. In this piece for The Guardian newspaper she argues:

The EU is far from perfect, but turning our backs on it is a risky strategy. Profoundly re-imagining what a reformed EU might look like shouldn’t just be left to David Cameron. We should be building a progressive case for Britain’s membership of a radically reformed union that works better for all of us.

The EU has enormous potential to spread peace, freedom and security in and around Europe, as well as further afield. It’s with this vision in mind that I’ll be campaigning to stay in Europe.

Unfortunately, it appears to be just that, ‘a vision’, at this stage. If Cameron ditches the employment and environmental protections afforded by the EU, we may have to take a couple of steps back, before we can move forward to meet Lucas’ idealised EU.

So where does this leave an eco-socialist member of the Green Party like me? Well, there are differences of opinion in Green Left also. Personally, and in line with a recent TUC general council statement on the issue, I’m awaiting the outcome of Cameron’s negotiations before deciding which way to vote. We don’t know at this stage even what we will be voting on.

The issue seems to come down to how you view our chances of getting a better deal by staying in or leaving, and I’m still considering this too. Would it be easier to just take on the right in the UK, or take on the whole of the undemocratic EU? If we build alliances across the EU with our fellow travellers, perhaps this is more desirable, but how likely and achievable is this? For me it will probably come down to a lesser of evils, because in or out of the EU the next few years look bleak for eco-socialism either way.
Posted by Mike Shaughnessy at 10:59