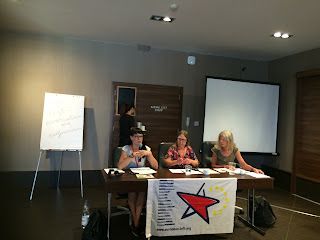 Corinne Morel Darleux, Gitte Pedersen and Inger Johansen at the Summeuniversity of the Party of the European Left and transform! 2017

Written by Gitte Pedersen and first published at Transform Europe


Ecofeminism is a combination of ecology and feminism. Environmental and ecological movements and even ecosocialism tend to overlook the fact that there is a connection between the capitalist patriarchate, the male dominance and the suppression of women in society and the ecological crisis.  On the other hand, women's movement and feminism have a tendency to overlook environmental and ecological problems. Therefore, a combination of ecology and feminism is necessary - ecofeminism. Ecofeminism is both an anti-globalization movement as an ideological critique that draws on women's historical experiences with socially reproductive work. In addition, ecofeminism is also an academic discipline with threads to feministic or care economy. The actual term ecofeminism goes back to the French feminist Françoise d'Eaubonne (1920-2005), who introduced it in 1974.

A showdown with growth ideology

One of the pillars of capitalism is the idea of ​​eternal growth. More growth is today's mantra, to produce more and create new markets all the time - a rush without end. And to great harm to the environment and climate. The neoliberalist market economy stand as the only possible community development. But is an economy which only focus on growth and the greatest possible profit desireable? An economy which destroys social relationships between people and exploits and damage nature? This is what Maria Mies and Vandana Shiva call the capitalist patriarchal world system - "a system that builds and maintains itself through the colonialization of women,"foreign" people and their lands, and of nature which it is gradually destroying."

We perceive nature as an inexhaustible resource that we can use for our own sake. This way of thinking comes from philosophers like Francis Bacon (1561-1626) and Rene Descartes (1596-1650). This period is called the scientific revolution because there was a shift in our perception of nature from an organic perception, where nature was perceived as an organism,  as 'Mother Earth' to a view based on mathematics and sciences. Bacon said: Nature's language is mathematics, and for him it was a question of being able to describe nature, that is, to describe the laws of nature, because by describing them one could understand nature and thereby master it. Bacon is the author of the words 'knowledge is power' and with these he believed that the scientific insight into the natural laws is a prerequisite for man to interfere with nature and change it to serve human purpose.

Descartes followed this line. Descartes was dualist and perceived the world as distinctly divided into two parts:  a res cogitans (a thinking thing) and res extensa (an extended thing). Only the thinking thing, which means man who is equipped with reason is worthwhile.

Critique of the mechanical view upon nature view and science

The Self - The Other

The global north - the global south

This list is very long and it unconsciously structures our way of perceiving the world and it is maintained by the hegemonic practice of religion, philosophy, law, science and economic, according to Ariel Salleh. They serve to maintain the exploitation of women and nature by the capitalist patriarchal world system.

As evidenced by the dualisms, there is a contrast between man and nature. Man i.e the male stands outside and over nature. The woman, on the other hand, is identified with nature. There are many parallels between women and nature, and it is the same mechanisms that suppress and exploit both. Women's free reproductive work is distributed in the same way as nature is used to create added value for the capitalist patriarchate. Therefore, socialist ecofeminists want another priority of the reproductive work - without reproduction no production! In the globalized neoliberalist market economy, women's reproductive work does not count. According to German sociologist Christa Wichtericht, the capitalist market can only function because it makes use of unprofitable reproductive work. The hegemonic neoliberal economy intensifies the use of human, social and natural resources in spite of increased efficiency. This economy is unsustainable because it ignores the social and ecological limits of growth. We must emphasize that social reproduction and care work also create value.

Socialist ecofeminism is in constant dialogue with ecosocialism which it tries to influence by emphasizing the reproduction instead of production as the key concept of a socially just and sustainable world. It assumes that the non-human nature is the material basis of life, and that food, clothing, shelter and energy are essential for sustaining life. Nature and human nature have been socially and historically constructed and changed through human practice. Nature is not a passive object to be dominated and mastered, but an active subject which humans must develop a sustainable relationship with. Socialist ecofeminism is critical of the capitalist patriarchate and focuses on the dialectics between production and reproduction and between production and ecology. It provides a good starting point for analyzing social and ecological changes and proposing social actions that can lead to a more just and sustainable world.

Everything else is just extended things without meaning and reason - the non-human nature, animals and the human body-which is distinct from the soul. According to Descartes everything in nature happens according to the principle of causation, everything has a cause ande and effect. As a result, nature is just matter in motion and is reduced to a mere mechanical machine.

According to Carolyn Merchant this new mechanical philosophy reunited the cosmos, society and the self into a new metaphor - the machine. Unlike the organic view upon nature, where nature is perceived as a nourishing mother, the mechanical view upon nature is deprived of all kinds of meanings and secrets, nature is reduced to just dead matter in motion. The human being is above and beyond nature and has the right to master and exploit it. However, the notion of human beings must not be understood as men and women; women are characterized by feelings and not reason, and therefore, her status as a reasonable person can be questioned. Women have always been excluded from philosophy, as it is largely permeated by reason.

The western philosophy of history is created by white, affluent middle aged men. Women and nature have always been something to be mastered and controlled. Descartes' mechanical view upon nature has had an immense influence on philosophy as well as science, and it is still the view upon nature that prevails today. A view upon nature where all respect for nature and its processes have disappeared. Although many of us are completely alienated in relation to nature, we must think of nature in other ways and once again respect it, it is after all our livelihoods.

Posted by Mike Shaughnessy at 06:32