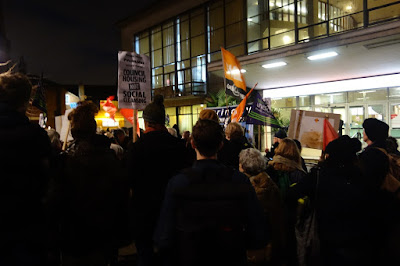 Protesters against HDV outside Haringey Civic Centre earlier this year

I’m an active older resident of Haringey in London who spends a lot of time with individuals and groups supporting vulnerable older people.  I was a Parliamentary candidate in Hornsey & Wood Green for the Green Party in 2015 and I’m very concerned about the housing crisis and lack of decent and affordable homes in the borough.

I’m taking legal action – now including a Judicial Review – in order to stop Haringey Council’s leadership from demolishing several housing estates and selling off its public assets.  At an eventual value of £2bn, it would be the biggest ever sell-off of public assets in local authority history.

It will affect many of the present Council estate residents who would lose their current homes as well as those who are currently homeless.  The council have refused to give a written guarantee of a right to return on council tenancies, and only a small percentage of the new accommodation will be on social rents. Whilst some tenants might be rehoused locally, most will lose their current residential rights as tenants.  The replacement homes will have a lack of genuinely affordable housing and there is no guarantee at all of social housing.

“Regeneration” is about bringing wealthier people into Haringey and many poorer people having to move out – as has happened in Southwark with Lendlease, Haringey’s chosen partner.  In addition, there is a very high risk to all of Haringey residents by putting so much of the public purse in the hands of a new limited company with no guaranteed income and no risk assessment shared.

Many of Haringey’s Labour councillors also share our concerns but the leadership have refused to accept their own Overview and Scrutiny Committee’s reports calling for a halt to the HDV.  We have also called in the District Auditor who is conducting a public interest investigation.

There has been a serious lack of consultation, of democratic process, of transparency and accountability, as well as duties of equal treatment which must now be addressed in a court of law.   A 'Funday' survey asking if tenants want 'improved housing' would be expected to return an almost 100% 'yes' vote!  But there has been no genuine consultation on the HDV and only a limited amount on the demolition of Northumberland Park.

We have issued a ‘Pre-Action’ letter to the Leader of Haringey Council and in subsequent correspondence she has dismissed our concerns.  Over £8,000 has been raised already for these legal costs so far but we now have to go to the High Court where our barristers will make the case for stopping the HDV and reconsidering.  We therefore need £4000 soon and we may well need more after that.

If we win – and our lawyers Leigh Day feel we have a very strong case - , a judge can stop this vehicle in its tracks and make Haringey reconsider its options – including putting its case before the electorate in the Council elections of 2018.  The wide coalition opposing the HDV includes members and councillors of the Labour Party and the Lib-Dems as well as the Green Party.  It also includes many non-affiliated individuals and groups including the Federation of Haringey Residents’ Associations and Unite Community Branch.

Please donate to the legal challenge fees at Crowd Justice

For further information go to StopHDV.com


Gordon Peters is a retired Social Services Director and currently chair of Haringey Older Peoples Reference Group. He is a member of Haringey Green Party and a Green Left supporter.

Posted by Mike Shaughnessy at 13:18