Is There a Nazi in the White House? 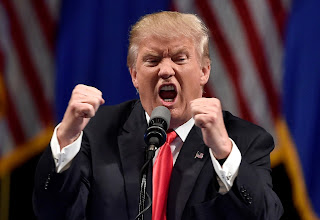 Donald Trump is trying hard to put a pretty face on racism. But the racists, openly embracing the label, won’t let him.

Referring to the violent gathering of self-professed fascists in Charlottesville, Va., during his press conference Tuesday, Trump said, “Not all of those people were neo-Nazis, believe me. Not all of those people were white supremacists by any stretch.” But those who showed up for the “Unite the Right” rally Saturday defined themselves so clearly that Trump can’t whitewash their hatred away.

The Nazi website The Daily Stormer even declared this season the “Summer of Hate.” (The website has recently been dropped by its hosting company, GoDaddy). On Saturday, protesters gathered, wearing swastikas and chanting the Nazi slogan “Blood and Soil,” and marched KKK-style with lit torches. One attendee literally emulated those who pledge allegiance to Islamic State by plowing down people in the street with his car, killing a young woman named Heather Heyer.

Anyone claiming to be non-Nazi who marched alongside the Nazis either agreed with their fascist ideology or condoned it. Either way, Trump appears even more deluded than usual in his attempt to defend the Nazis when the Nazis themselves are proudly proclaiming their fascistic credentials.

Rather than use the euphemistic term “alt-right” to describe the conglomeration of pro-Confederacy activists, neo-Nazis, white nationalists, Ku Klux Klan members and Trump supporters who gathered in Charlottesville, we ought to use the familiar words: “Nazis,” or “fascists.” Not only are the terms interchangeable when judged by the aspirations of those they represent, they have an appropriate historical significance, reminding us of what is at stake.

A recent psychological study of people professing to be alt-right confirms that they actually look upon nonwhites as less human. So if you talk like a Nazi and walk like a Nazi, you are a Nazi unless you can prove otherwise. Another way to put it: You’re either with the fascists or against them.
Trump has repeatedly sent the message that he is with the Nazis. Which makes him a Nazi sympathizer at best, or simply a Nazi by default.

On Sunday, he attempted to spread the blame for the violence in Charlottesville on all sides, for which he was praised by the fascists. Then, on Monday he was reined in by his party and likely his own staff when he read scripted remarks that included the childish phrase, “Racism is evil,” and even deemed the KKK and neo-Nazis “repugnant,” (although he continued his silence over Heyer’s death).

But by Tuesday, his inner Nazi broke free, and the president practically frothed at the mouth at another press conference, ranting so overtly in favor of the fascists that even some conservative TV hosts were stunned.

When the world condemned the atrocities of Nazi Germany during World War II, there was an eventual reckoning that the inaction of “good Germans” was also partly responsible for the resulting Jewish holocaust. Republicans, including members of Congress who supported Trump during his campaign and after the election, cannot claim to be surprised by his fascistic tendencies surfacing in the wake of Charlottesville, given how often he courted Nazis and racists. Just as good Germans kept silent while disappearances and mass murder took place all around them, Republicans are continuing to stand behind Trump in relative silence, hoping the rest of us do not notice how they enable him.

While some GOP senators, such as Florida’s Marco Rubio, Utah’s Orrin Hatch and Arizona’s John McCain boldly and unequivocally denounced white supremacy, they did not publicly break with the president over it.

But the time is now. They are either with the Nazi in the White House or against him. They cannot denounce white supremacy but continue to support a white supremacist simply because he is president.

Nazism is not simply one end of a political spectrum. The world decided decades ago that it is an ideology that has no place on the spectrum at all. The adoption of Nazi symbols by this movement means it is deliberately aligning itself with one of the worst, most universally denounced mass crimes in modern human history.

We’ve fought this fight before, and despite the morally repugnant, unnecessary and horrific atomic bombings of Hiroshima and Nagasaki by the U.S., there was little argument in the years following World War II that Nazism needed to end.

Despite the fact that black Americans continue to face repression and discrimination in myriad forms, there has been very little deliberation in recent years over the fact that slavery needed to end or that the adoption of civil rights laws in the U.S. was imperative.

There is no debate over such things because we have moved beyond allowing them to remain morally acceptable. There is no need to rehash the argument about whether one race of humans is superior to another. Biology, human rights, common sense and basic decency are aspects of society that we should be able to take for granted in modern America. But along came Trump, and now we are not just fighting for progress on racial justice, gender justice and economic justice, we are obliged to spell out that Nazis are reprehensible and watch Trump forced to express such basic truisms as “racism is evil.”

The fascist right and its leader Trump are experts in deflection. Trump used the term ‘alt-left’ on Tuesday to ascribe violence to the counterprotesters in Charlottesville, feeding the popular right-wing myth that leftists are the violent ones, rather than the hate-spewing, heavily armed Nazis. There is even a debate about whether it is okay to punch Nazis, rather than a discussion about why Nazis are allowed to spew their hate publicly and incite violence against whole communities of people. Using the rubric of “free speech,” Nazis have even been able to garner the support of the American Civil Liberties Union, a noble organization with a long history of standing up for people’s civil rights, mine included, but which in this case chose to throw its weight behind a movement promising violence against others.

By backing white supremacists and fascists, Trump has declared war on the rest of us. The most important discussion we should having today isn’t about who is responsible for the violence or whether Nazis are really violent. We should simply ask why are any of us tolerating the Nazi in the White House?

This article was originally published at Truthdig.

Sonali Kolhatkar is the host and executive producer of Uprising, a daily radio program at KPFK Pacifica Radio, soon to be on Free Speech TV (click here for the campaign to televise Uprising). She is also the Director of the Afghan Women's Mission, a US-based non-profit that supports women's rights activists in Afghanistan and co-author of "Bleeding Afghanistan: Washington, Warlords, and the Propaganda of Silence."

A scary video interview with a of group of American Nazis.

Posted by Mike Shaughnessy at 11:20