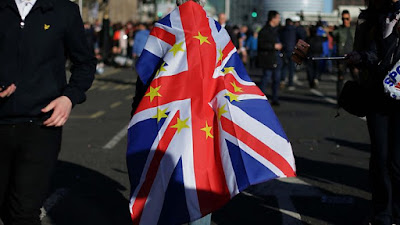 Now I know that opinion polls are unreliable, we have had ample examples of this recently, but I found the results of this Opinium poll perplexing. The sample is just over two thousand (2,006) people, which is double what the voting intentions polls are usually. It seems from this poll that the British public are just as confused and unrealistic, as our political representatives are.

The poll showed that if there was another referendum a majority of 47% to 44% would vote to remain in the EU. A clue to the reasons for this sentiment, seem to lie in the other finding that 26% of Brexit voters think that they were misled during the campaign. With only 19% of all respondents believing the campaign was truthful. The leave campaign pledge to spend £350 million on the NHS was believed by only 35% of leave voters and 16% of remain voters.

Despite this, when asked whether there should be another referendum on the outcome of our eventual Brexit settlement, only 37% agreed and 49% opposed the idea.

How can this be? A majority of all voters now do not want to leave the EU, a big majority think they were lied to in the campaign, but only a little over a third want the chance to vote again, and almost half oppose the idea completely.

It seems as though most voters have bought the idea put forward by the Tory government (and the main opposition party, Labour), that we can have our cake and eat it. That is, we can get a deal that allows access to the single market, the customs union and to leave the jurisdiction of the European Court of Justice (ECJ), and put a limit on immigration from the EU.

The EU have made it clear that this not possible, but people apparently refuse to believe it to be the case. I have criticised the government and the Labour party many times on this blog for being deluded over what is achievable as a Brexit deal, but it looks as though they are behaving just as the public wants them to.

But, in yet another twist, nearly half of respondents to this poll, or 47 per cent, said they disapproved of the way Theresa May has handled the Brexit process, with only 28 per cent approving of her actions.

Perhaps with the dismal quality of last year’s referendum still fresh in the minds of the public, they just want the result overturned by MPs? The only other rational conclusion to draw from this poll is that the public are completely irrational.

The government has started to release papers outlining what it wants from the negotiations with the EU on our post Brexit status, with the latest one proposing a new arrangement to replace the jurisdiction of the ECJ.

The paper suggests more flexibility in the UK position on the ECJ. Almost a year ago, at the Tory party conference, Theresa May, the Prime Minister, said that the UK would not be subject to:

“supranational institutions that can override national parliaments and courts”.

But this is exactly what has been suggested in this week’s paper on the matter. It says that a new supranational arrangement should be made, which will follow the rulings of the ECJ, but not be called that. The government appears to be trying to replicate the arrangement we have now with the EU, but give the appearance of being some new, very different arrangement. We'll probably end up paying more to the EU as well, for the 'new' arrangement.

Rather than pretending that we are not leaving the EU, but giving the arrangement a new name, surely the most sensible thing to do, is to remain as we are and save everyone a lot of time and money?


What looks to be being advocated is only a matter of appearance, and no real substance. Will the public be happy with this? That is anyone’s guess.

Posted by Mike Shaughnessy at 10:35