Tracking the corporate power in fossil fuel production and use

Shares of carbon emissions traced back to producing companies, for the period 1854-2010. Source: carbonmajors.org

The Carbon Majors Report 2017, published last month, showed that 71% of all greenhouse gas emissions since 1988 can be traced back to just 100 fossil fuel producing companies.

It’s a useful way of looking at the production half of the fossil fuels picture – and needs putting together with the other half: the companies that consume the fuels.

Last month’s report, by Paul Griffin of the Climate Disclosure Project, was based on years of research by the Climate Accountability Institute, which attributes greenhouse gas emissions not to the companies or people that burn coal, oil or gas, but to the companies that got the fuels out of the ground in the first place.

The report focused on the period since 1988, on the grounds that the global warming effect of fossil fuel consumption was “officially recognised” in that year, through the formation of the Intergovernmental Panel on Climate Change.

■ More than half the fossil fuel industry’s emissions since 1988 are attributed to just 25 companies. Saudi Aramco, Gazprom of Russia, the National Iranian Oil company, ExxonMobil, Pemex of Mexico, Royal Dutch Shell, China National Petroleum Corp, BP and Chevron are high on the list. The Chinese and Russian coal industries, treated as single entities because of the difficulties of getting detailed company information, are in the top ten; so is Coal India.

■ The emissions that originated with fossil fuel production in 28 years since 1988 were greater than in the 237 years before that.

The Carbon Majors Database on which the report was based, was put together by a team of analysts, led by Richard Heede, who combed through company reports and oil and coal industry statistics and extrapolated production numbers going back to 1751. Then they used recent emissions research to marry up companies’ output with the greenhouse gases that go into the air once the fuels are burned, or used in cement manufacture and other industrial processes.

Heede’s original 2013 article, which covered much longer time periods, is well worth reading.

For both analysis and campaigning, this research on fossil fuels production gives us half of the pieces of the jigsaw. They need to be put together with the other pieces, about consumption.

For analysis, no-one has tried to compile a database of the corporates that consume fossil fuels. It would be much more complicated than the list of producers, but the concentration of wealth and power would still be clear.

To get an idea, you could start with the International Energy Agency’s energy balances, which provide the best worldwide sector-by-sector breakdown. (Basically, electricity production, industry, transport, and household consumption each use about one fifth of primary energy, with the final fifth going to other users. About four-fifths of the primary energy comes from fossil fuels.)

The IEA data show that 20.8% of primary energy goes into producing electricity and heat. By far the largest consumer of that electricity is industry – in a deeply unequal world in which 1.2 billion people have no electricity access at all, and a larger number have only partial or irregular access to electricity.

Other large users include the iron and steel industry (5.3% of all primary energy) and other industries (15.7% of all primary energy). Much of the energy use in industry is concentrated in the largest corporations, just as industrial production is. The share of developing countries, especially China, has rocketed in recent years – but that doesn’t mean inequality has fallen. The stuff produced by the Chinese industrial boom is largely for rich-country consumers elsewhere.

The sectoral statistics don’t tell the whole story, of course. To give just one example, the IEA’s category “other energy industry own use and losses” – which doubtless represents corporate reluctance to tell government statisticians what is going on – accounts for a whopping 7.6% of the IEA’s total primary energy figure, about four times as much as the entire aviation industry. Another mystery is the level of the military’s fossil fuel use, which many countries don’t include in statistics. Historians’ guesstimates are around the 5% mark. 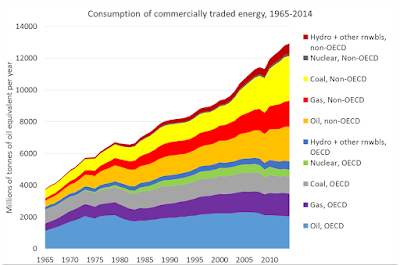 Global consumption of commercially-traded energy, 1965-2010. This does not include biofuels on which hundreds of millions of rural people in the developing world rely. Source: BP Statistical Review.

Global fossil fuel consumption has more than tripled since the mid 1960s. Since the international climate talks began in the late 1980s it rose by more than half.

International  agencies and would-be experts commonly claim that rising population is the main cause. But, firstly, the consumption increases are concentrated in rich countries and urban areas elsewhere. Secondly, while individuals are often the final consumers of fossil fuels, and of products made with the help of fossil fuels, consumption takes place through social, economic and technological systems. Studying these gives a better guide to where the fuel goes.

The most important processes that have raised global fossil fuel consumption since 1950, I have found in a recent research project, are: electrification, industrialisation, the transformation of the labour process, urbanisation, motorisation and the growth of material consumption and consumerism.

Take road transport, which accounts for 14% of primary energy supply, with the lion’s share going into private cars. In 1950, there were about 55 million cars, of which three quarters were in one country, the USA. Today it’s pushing 800 million, mostly in rich countries. The manufacture, as well as use, of cars gulps down huge amounts of fossil fuels.

This is about how capitalism works as a whole system – the mighty motor-producing corporations, the planned obsolescence central to their business model, the road-building projects they lobbied for and governments agreed to, the car-based city planning that has spread out from the rich countries – and not simply driver behaviour.

These dynamics probably can not be captured in a database. But it doesn’t make them less important.

For campaigning, a broader view embracing both production and consumption is essential, if social movements and labour movements are to evolve coherent strategies to challenge the domination of energy systems by fossil fuels.

The Climate Disclosure Project, which co-published last month’s research, focuses on trying to persuade shareholders in oil, gas and coal companies to get those companies to “set ambitious emission reduction targets”.

Pedro Faria of CDP said after the report’s release that “critical shifts in policy, innovation and financial capital” are putting “the tipping point for a low carbon transition” in companies’ reach, and urged companies to get in line with the targets set by the Paris agreement on climate change. (The companies could “hold the key to tackling climate change”, the Guardian claimed. Really?!)

The central argument here is that government support for the move away from fossil fuels will make coal, oil and gas reserves into “stranded assets”. But this depends on governments taking action – which a quarter of a century of the talks process has shown they are determined to avoid.

That’s why the Paris targets are insufficient to limit global warming to 2deg C above pre-industrial temperatures, let alone the 1.5deg C that supporting governments say is preferable.

Social and labour movements need to develop strategies for the future outside of the talks process, rather than tie themselves to the talks’ false narratives. While every initiative to move the energy sector away from fossil fuels is welcome, best of all are strategies that envisage economic, social and technological change as a whole, transforming both production and consumption.

■ Simon Pirani is author of a history of global fossil fuel consumption since 1950, to be published by Pluto Press in 2018. He will give a public seminar at the LSE in London on Tuesday 19 September (details here), to which all are welcome.

Posted by Mike Shaughnessy at 09:59