What Have the Lib Dems Achieved in Government? 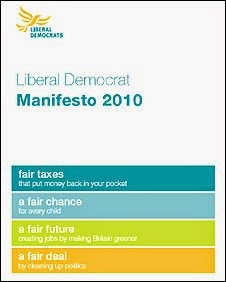 The Lib Dems could have ended this coalition government at any time in the past five years, so we must assume that they have been broadly happy with the policies that have been pursued. So, I looked through their manifesto for the 2010 general election in search of policies which they stood on, and have managed to deliver.

There is a whole raft of policies in the manifesto, but I failed to find much in the way of policies successfully implemented. Here are the meagre pickings that I have found:

Tax-free earning threshold to rise to £10,000, paid for by a "mansion tax" of 1% on properties worth over £2m applicable to value of property over that figure

Well the Lib Dems didn’t get their mansion tax to pay for this, but the tax free earning threshold has indeed been raised to £10,000. To pay for this in the absence of a mansion tax they have cut spending on public services and made cuts to working tax credits. The effect of this policy is to benefit higher earners, when cuts to tax credits are factored in, the lower paid are worse off.

Cap pay rises at £400 for all public sector workers, initially for two years

Plenty of the public sector work-force has been lucky to get £400 a year pay rises, with pay freezes or 1% increases at a time when inflation was running at well above 1%. On top of this, public sector workers have had their pension contributions raised meaning that their take home pay is reduced further. And these are the lucky ones who have not been made redundant.

Integrate health and social care, allow people to stay in homes for longer rather than going into hospital or residential care by limiting bureaucracy [England only]

This is gradually being introduced by the government with responsibility for health and social care passing to local authorities. Some finance has been transferred from the NHS budget, but nearly all councils, including Tory and Lib Dem run ones, say the money is not enough. The Local Government Association forecasts a crisis in social care provision unless £5 billion of more money can be found to fund these services.

Fixed term parliaments have been introduced, although that was more to do with not allowing the prime minister to choose the date of the election that was most unfavourable to the Lib Dems, than any constitutional necessity. We didn’t get STV voting, but we did get a referendum on the Alternative Vote electoral system, which is less democratic than STV, but the referendum was lost massively anyway. No reduction in MPs.

Royal Mail was indeed fully privatised and at a knock down price, probably about one billion pounds under the market value, so the wealthy made a killing buying and selling the shares at a time when public services were being slashed. A profitable publicly owned service now in private hands on the cheap.

This has happened with Local Enterprise Partnerships (LEPs) replacing Regional Development Agencies. These LEPs are a partnership between local authorities and private businesses in regionally geographical areas. The purpose is to grow local economies, but this has scarcely worked at all, with growth outside of the private housing market very modest indeed. Of course, local authorities have had their funding cut by around 40% at the same time so it is hardly a surprise that LEPs have failed to deliver.

So, as far as achievements go then, not much for the Lib Dems to shout about? They say that their part in the austerity economic measures have paid dividends, as do the Tories, but there is flimsy evidence to support this. They also say that they have reined in the Tories on many policies, and there may be a small amount of truth in this. But it looks to me as though the Tories have got pretty much what they wanted, with the exception of stopping them gerrymandering the electoral boundaries in their favour.


All the ‘successes’ mentioned above have been largely supported by the Tories, so I have to conclude that the Lib Dems have next to nothing to show for their five years in government, except becoming very unpopular with the voters.