The Varoufakis vs Schäuble Endgame 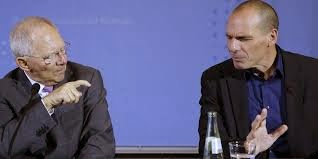 As many analysts and observers previously predicted (myself included on Social Europe), the eurozone crisis not only is not over, as some European leaders had boasted, but it has returned in a more virulent form. The possibility of a Greek exit – Grexit – from the eurozone is closer than ever. The current standoff between Greece and Germany (as well as other eurozone members, but let’s be honest, this is really about the “German way” vs the “Greek way” for Europe) is the latest chapter of the ongoing saga. But this chapter may not play out as well as the previous ones.

Greece’s Syriza government seems to have gambled that it had to force a crisis to get some movement from its eurozone partners; the near-depression-like situation in Greece had become untenable, and Syriza understandably wants to try and push “reset.” But in many ways, the battle between Germany and Greece has become personalized to that of one between the two countries’ finance ministers: Wolfgang Schäuble vs Yanis Varoufakis. It has been quite a match, with wit and words flying back and forth with passion, and even a thinly veiled bitterness that one sometimes finds between estranged family members.

The biggest advantage that Varoufakis has, it seems to me, is that of all the leaders commenting on the situation, whether Chancellor Merkel, President François Hollande, and especially Herr Schäuble, Varoufakis is the only one who is making any sense. To wit: Greece’s debt IS unsustainable; most of the money being lent to Greece by Germany and its other partners partners IS going to pay the interest, not the principal (so the debt is not shrinking); Greece’s debt HAS worsened under the Troika program, not declined (contrary to what the Troika had predicted in the early stages of this crisis, which now seems like centuries ago).

Varoufakis also is correct that it makes no sense to sell off your national properties and treasures at fire sale prices in the middle of a deflationary crisis; and finally that the third largest party in Greece right now IS a fascist party (with Varoufakis quite rightly drawing direct analogies to how a depression in Germany in the 1920s and early 1930s made the conditions ripe for the Nazi rise).

Neither Schäuble nor any of the others have disputed Varoufakis’ “statements of fact.” The Germans instead have countered with a familiar but increasingly hollow sounding refrain: Keep your obligations. Keep the commitments of previous governments (as if new governments do not change the policies of old governments – it happens in other countries all the time, including in Germany).

The one striking point that the German government has in its favor, which has been echoed by other eurozone governments, is that if any of Greece’s debt is forgiven, then it’s the taxpayers in the rest of the eurozone countries that must pay for it. One estimate said that the bill for Finland would be approximately $1 billion, and if the Finnish government agrees to it that would further energize a vote for the far right True Finn party.

If you are keeping score, that means, ironically, both the Greeks as well as its eurozone partners are enlisting the specter of the far right as the reason for its chosen policy preferences. The far right has become everyone’s (but the far right’s) bogeyman to pull out of the closet, each for their own reasons.

But the only reason the far right can play this role is because it has in fact gained in power across Europe in recent years. And each bullet that is shot through a door or a café window by an Islamist extremist further increases the electoral appeal of the far right. Beyond that, the primary reason the far right has made gains is because of the vacuum at the heart of Europe, where used to lie a vision – as well as a plan – for a greater Europe.

It’s that vision and plan that really is at risk here, because nature abhors a vacuum and does what it must to fill it. If European leaders and political parties can’t figure out a way to hold themselves together, arm in arm, there are enough centrifugal forces based on history and culture to start pulling it all apart.

All of the participants in this extended dance, even as they are stepping on each other’s toes, should ask themselves – what do I want Europe to look like in 10 or 15 years? Should Greece be in? Or does it not matter? Does Europe want to keep lurching from currency crisis to currency crisis? Or is it important for the future that, one way or another, this eurozone crisis is dealt with, once and for all, so that stability may return? If the latter, what is your plan to put on the table? This is exactly the type of discussion that the Greek leaders seem to be trying to force its European partners to have. And it’s the right discussion to have. But the European partners, led by Germany, don’t seem to be playing along.

The reality is that, while the economics of this crisis are pretty clear and straightforward, the politics within each country are not. Varoufakis is smart to say this is a “European problem” not a “Greek problem”, i.e. meaning Portugal, Italy, Ireland and Spain also are being hurt by austerity. But so far the economic logic has not prevailed over the politics. (Also, it must be said that Ireland and Spain, and to some degree Portugal, have stabilized a bit due to mighty efforts on the part of those member states. Though one can hardly say that they are thriving and out of the deep water).

While Europe is very much a place where the word “solidarity” is thrown about, that solidarity mostly extends to one’s own national kinsman living within the same member state, as evidenced by a fairly robust and comprehensive safety net within each state. The solidarity does not, however, extend very far between member states, who are each expected to pull its own weight. This is the opposite of the situation in the United States, where the safety net is much less developed, but there actually is quite a lot of solidarity between member states, including a transfer union (in which the better-off states make appropriations to the lesser-off states), debt sharing and other forms of interstate allocation.

Europe today remains a place that is betwixt and between. That is the state of the European “union.” That may change in subsequent decades, but for now, Greece does not seem to be winning the day in its bid to overcome German obstinacy and forge a European-wide system with more interstate solidarity.

Besides forcing a crisis, Varoufakis seems to be hoping that logic, common sense, and a dash of humanity will carry the day. We shall see if he is right. European leaders have been pretty good at snatching what they need to out of the fire at the last moment. But if Greece has to exit the euro – and possibly the European Union, according to the rules – I don’t think it’s going to be pretty at all. No European will benefit from having a failed state on its doorstep. Hopefully cooler heads will prevail.

Written by  Steven Hill and first published at Social Europe
Posted by Mike Shaughnessy at 07:46