Prince Charles: The Ceremonial Pimp Of British-Saudi Venality And Hypocrisy 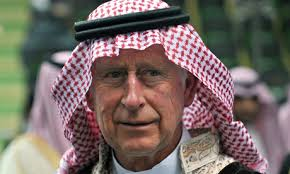 Before recently flying out to pay his last respects to King Abdullah of Saudi Arabia, the last time Prince Charles jetted out to the Wahhabi Kingdom was on Tuesday 18th November 2014 to bring a ceremonial end to the long running business saga by literally customarily dancing to the tune of the Saudi-Wahhabi clan. The first in line to the British crown dressed to the nines in traditional military regalia of the Saudi nepotistic despots, as he helped to seal yet another military deal which will healthily burnish the order book of Europe’s largest arms manufacturer, BAE Systems. The price for 72 Eurofighter Typhoon jets was finally agreed to by the Saudi clan.

The deal, aptly and Orwellianly named “Salam” (i.e. Peace), is worth £4.5 billion (equivalent to roughly $7.1 billion) and according to a report in the Times of London, is part of the notorious and corrupt £40 billion “Yamamah” (i.e. Dove) deal. Furthermore, the hundreds of millions of pounds newly “wringed” from the Saudi clan will underpin thousands of jobs in the North West of England “and around the British defence supply chain” added the Times.

Campaign Against Arms Trade (CAAT,) an organisation which monitors the arms industry, claimed that the United Kingdom sells more weapons to the Saudis than any other country in the world. On the day of the Prince’s arrival to Saudi Arabia a CAAT spokesman urged him to “disassociate” himself from the “despotic regime” so as not to confer legitimacy on it. They also urged Charles to raise the issue of human rights abuses in the Kingdom.

The following day, CAAT was more forthright and condemned Prince Charles for securing the Typhoon deal with the ruling clan. The spokesman once again reiterated the organisation’s contention that the deal primarily lends “legitimacy” to the Saudi repressive regime. On the other hand, an analyst at the investment bank, RBC Capital claimed that with “Salam cash coming in, this should give BAE more flexibility for cash deployment moving forward.”

From Saudi Arabia, the Prince travelled to the only other Wahhabi kingdom in the region, its neighbour Qatar, where there are currently military bids on the table for (coincidentally!) 72 fighter jets. One of the bidders is surprise, surprise, BAE Systems but amazingly Prince Charles seems to only have had time for his favourite hobby horse, global environmental degradation. Naturally he commended the work done by Qataris in addressing the environmental challenges faced by the principality then merrily flew back to Blighty.

However, it is all very well for CAAT to argue the UK and its wondrous Prince Charming is conferring and bestowing “legitimacy” on the Saudis, but if it wasn’t for the Saudis and the other Arabian despots of the Persian Gulf who else would be purchasing arms from BAE Systems or for that matter bankrolling other aspects of the British economy?

In the past decade, Saudi Arabia and the Arab statelets (i.e. Kuwait, UAE, Qatar) created by British Imperialism during the decline of the Ottoman Empire in the late nineteenth century have been pumping billions into the British economy keeping it afloat in these financially difficult times. Each of the states have highly dubious human rights records and none are democracies in any sense of the word. 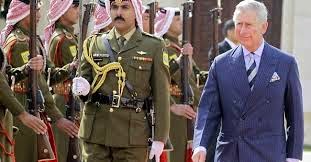 Qatar, for example recently purchased Harrods, the world famous store and built the tallest building in western Europe, the Shard in London. The opulence and waste behind the Shard was partly justified as Qatari “confidence” in London’s economy. Sainsbury’s, a national UK supermarket chain has been kept afloat by the ruling Qatari al-Thani family as well. London’s Olympic Village is owned by Qatari ownership after a deal worth hundreds of millions of pounds. Recently, it was announced that £10billion is on the verge of being invested by Qatar in British infrastructure projects. Kuwait, on the other hand, has already invested half of that on these projects in the UK.

More so, ‘Little Chef’, a UK roadside diner was bailed out by a Kuwaiti company and the British national lingerie retailer ‘La Senza’ was saved from bankruptcy by another Kuwaiti company.

Cricket stadiums built by British companies, a sport which has little traction for Arabs, are multiplying in the Gulf. The UAE and Qatar ruling families also possess a soft spot for British race horses, spending millions on these animals while indigenous Arabs in the hinterland of the Arab World scrape a living and Palestinians continue to endure occupation, theft and ethnic cleansing.

Furthermore, Qatar and UAE have a combined 48% stake in the London Stock Exchange. When Barclays Bank was on the verge of collapse during the recent financial crises, its Chief Executive successfully travelled to Qatar for financial assistance.

Is it really a contradiction that the world’s main harbingers and supporters of jihadism, al-Qaeda and the theology that spawns these violent trends is also the main and largest customer of Great Britain’s ultimate merchant of death, BAE Systems? More so, when Prince Charles complains about the ‘tragic plight’ of Christians in the Middle East isn’t he but exposing his own and Her Majesty Government’s hypocrisy knowing full well that this plight is caused by the ‘sugar daddies’ of the British economy, i.e. the Gulf states, in their support for jihadis in Iraq and Syria? It is all very well for CAAT to bemoan Prince Charles’s visit to the Kingdom and insist he secularly redeem himself by advocating human rights but the British have been dependent on the Gulf despots for a long time. In the late 1950’s Harold Macmillan, a former British Prime Minister, stated that without the oil of the Arabian peninsula the British nation would be “lost” and the whole structure of the British “economy would collapse”. Furthermore, “Without oil,” Macmillan noted, “and without the profits from oil” the UK will not be able to survive.[1]

The late Prime Minister’s opinion is probably more true today than it was back in the 1950’s when Great Britain was still renowned for its manufacturing industry which is now greatly diminished. Indeed, the very status of BAE Systems as a leading manufacturer would very much be in question without the “profits from oil.”

In conclusion, CAAT’s notion the Prince should be preaching human rights to the Saudi, Thani or any other Gulf Kingdom clan, British imperialism brought into existence misses the point. Venality and doing business with despots, is the latest economic strategy in a long line of total and inexcusable immoral policies rooted in British imperialist history.

Conducting business with the Saudis and the other Gulf nepotistic despots today is just as important to British prosperity as piracy, the slave trade, imperialist military conquest and colonialism was in the past.

Nu’man Abd al-Wahid is a Yemeni-English independent researcher specialising in the political relationship between the British state and the Arab World. His main focus is on how the United Kingdom has historically maintained its political interests in the Arab World. His essays have appeared in Alternet, al-Akhbar (Lebanon), Mondoweiss and Black Commentator. A full collection of essays can be accessed at www.churchills-karma.com. Twitter handle: @ChurchillsKarma.