Could the Greens have a Pro-Democracy Alliance with UKIP? 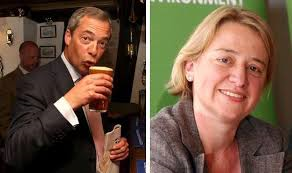 If someone had posed this question to me even a few months ago I would have thought they were having a laugh. Even now it seems preposterous but bear with me for a while.

UKIP are a xenophobic (probably racist), nationalistic, anti-European party that yearns for a by-gone past from the 1950s. The Greens are an internationalist, pro-European (albeit a very different, non-corporate Europe than we see today), multi-cultural party of the future. So nothing in common, apart from, agreeing with UKIP that we should hold a referendum on membership of the European Union (EU). Which at heart, is an issue of democracy.

In Greece, the Independent Greeks party (ANEL), sound remarkably similar to UKIP, but have just been brought into a government coalition by Syriza, the left wing, feminist, ecosocialist alliance (which includes the Greek Green party). If this isn’t an unlikely political partnership, I don’t what is?

Of course, Syriza fell just short of an overall majority in the Greek parliament in the recent election, and there were limited possibilities for a deal with the parties who won representation in parliament. The Communists (KKE), who one might have thought the obvious candidates, refused point blank to ally with Syriza, as they did not want to sully themselves with ‘petty bourgeois’ politics, or some such.

Obviously, Golden Dawn the fascist party were a non starter, which left only the pro EU memorandum parties of New Democracy (conservative), PASOK (‘socialist’) and the newly formed To Potami (The River, leftish). So the only non memorandum party was ANEL. Syriza reasoned that the austerity inducing policies from the EU were by far and away the biggest problem facing Greece today, so a marriage of convenience it was to be.

As reported on this blog, Podemos the left wing, anti-austerity party that has come from nowhere to top the opinion polls in Spain, draws around 10% of its support from people who traditionally voted for ring wing parties.

Jorge Lago, a member of Podemos’s citizens’ council, part of its wider leadership structure, said “we don’t talk about capitalism. We defend the idea of economic democracy.”  The Podemos leader, Pablo Iglesias has said “The divide now separates those, like us, who defend democracy … and those who are on the side of the elites, the banks, the markets. There are people at the bottom and people at the top … an elite and the majority.”

This sounds like a familiar refrain from Nigel Farage, UKIP leader, leaving out eh, the banks and markets.

Is Iglesias saying that this is not about right or left, but is instead about democracy? It certainly sounds like it, and I think there is a general feeling of a lack of democracy these days right across Europe.

UKIP is gaining votes from former Labour and Lib Dem voters, parties who are nominally on the left, as well as getting most of their support from former Tory voters. Maybe the same pattern is happening here in the UK?

The huge turn out in last year’s Scottish independence referendum is also an expression of unhappiness with our democracy, rather any particular desire for nationalism on the part of the Scots. Nationalism which tends to be a right wing pursuit, has been eclipsed by the desire to get a government which reflects the aspirations of the people in Scotland. Another example of a marriage of convenience?

The most I think we here in the Green party in England and Wales  can hope for is that those left leaning people who are supporting UKIP, for whatever reason, can be persuaded that they can best express their frustration at the lack of democracy in the UK, by supporting the Greens in the upcoming general election.  After all, we are a fiercely democratic party.


People everywhere are fed up with being ruled for the benefit the wealthy and big business, through undemocratic institutions like the EU and IMF, aided and abetted by establishment lackey politicians. The left must grab this opportunity, or to be sure the (far) right will.

Posted by Mike Shaughnessy at 09:49