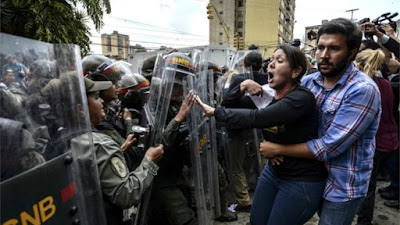 For some time now Venezuela has had an appalling media image: repression (with over 100 deaths in the last four months), opposition leaders in gaol, dismissal of the Attorney-General, in short, a dictatorship. A major oil producer, it is also seen as anything but Green. The reality, however, is very different, as this article will show.


The very fact of Venezuela’s enormous oil wealth (its reserves are now estimated to be the world’s largest) and its deposits of coal, gold, alumina and other minerals make it a coveted prize for global capital and the US.

Add to this its central role since 1999 in the emergence of a regional anti-imperialist and revolutionary alliance which poses a direct threat to corporate globalisation and US hegemony, and you can see why it is a prime target for media distortion, political hostility and destabilisation.

In a region where the Cuban and Nicaraguan revolutions had inspired hope of liberation and social justice through armed insurrection, such visions had been crushed by military regimes which used the guerrilla threat as a pretext for brutal repression.

But with Hugo Chávez and the “Bolivarian Revolution” the Venezuelans turned this logic on its head: yes, they said, we believe in peaceful change and democracy, but revolutionary democracy, participatory democracy in which ordinary people – workers, peasants, women, blacks and native peoples – organise to vote in elections, referenda, community councils and communes to show that “Another World Is Possible”.

The extraordinary success of this process, leading to dramatic improvements in health, education, welfare, housing, and rights for women, workers and minorities, guaranteed electoral victories for the revolution in all except two of twenty elections and referenda over the past 18 years. It also led to remarkable economic success for many years. But not surprisingly it met with ferocious hostility from Washington and the privileged Venezuelan oligarchy.

Unable to win elections, the oligarchy seized power by force in the April 2002 coup, but was driven out in less than 48 hours by mass resistance and because the military, inspired and reorganised by Chávez, were being radically transformed into a people’s army identified with the revolution.

Venezuela’s transformation, supported from the beginning by Cuba, now gave rise to a broader Latin American liberation project conceived by Chávez: the ALBA or Bolivarian Alliance for the Peoples of Our America. Not a “Free Trade Deal”, in fact its polar opposite, the ALBA is an economic, social, political and cultural integration project based on fair trade, social justice and environmental sustainability.

It includes Venezuela, Cuba, Bolivia, Nicaragua, Ecuador and four of the small Anglophone Caribbean states. Honduras and Paraguay also joined but then left following right-wing coups inspired by Washington, but other small Caribbean countries have since joined.

Two regional giants, Brazil and Argentina, also allied with Venezuela without becoming members of ALBA, and the Alliance also promoted cooperation between non-state actors such as social movements in different countries. The influence of indigenous movements and of the Bolivian government have led to increased emphasis on Pachamama – Mother Earth – and to ALBA playing a leading role in global climate negotiations.

Bolivarian Venezuela has also promoted less overtly political instruments of regional integration, notably UNASUR (the Union of South American States) and CELAC (the Confederation of Latin American and Caribbean States), in contrast to the older OAS (Organisation of American States) which has been described as “the US Department of Colonies”.

Other institutions promoted by Venezuela include PETROCARIBE, the Bank of the South, the University of the South and the multinational Latin TV channel Telesur. In sum these amount to an entire regional architecture asserting sovereignty and independence from the Colossus of the North.

It is in these circumstances that a global right-wing offensive, led by Washington but backed also by the UK and EU, has been trying to roll back all of the gains made by ALBA and the broader Latin American liberation project. The right-wing electoral victory of Macri in Argentina and the coup against Dilma Rousseff in Brazil paved the way for an all-out offensive against Venezuela, rightly seen as the key to the entire regional liberation project.

Of course there have been mistakes and deficiencies in the Venezuelan process and the government of President Nicolás Maduro. But Maduro has a democratic mandate and has repeatedly tried to negotiate with the opposition which is intransigent and violent.

The recent decision to convene a Constituent Assembly appears to have been a master-stroke: it mobilised the popular base of the revolution as never before since the death of Chávez, and it is no accident that opposition violence has ceased since the Assembly elections.


The media will not tell you that 70% of the 100+ violent deaths in the previous four months were caused by the opposition, a significant section of which is armed and very violent: they have shot police and troops, thrown Molotov cocktails, set fire to government  buildings and buses, and lynched unarmed government supporters, particularly those who are black or indigenous.

Sectors of the opposition are openly fascist, and prominent opposition leaders who are in gaol are there for having openly incited such violence.

Now with Trump’s new sanctions designed to strangle Venezuela, there is only one side we can possibly support in this conflict; in fact, victory for Venezuela could well be a crucial step in restraining the genocidal and ecocidal offensive of global reaction.

Posted by Mike Shaughnessy at 04:52