Review of Facing the Anthropocene: Fossil capitalism and the crisis of the Earth system by Ian Angus 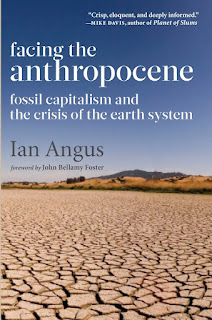 The term ‘Anthropocene’ refers to the start of a new geological epoch which, according to most leading Earth System scientists, has now replaced the Holocene. It means geological strata deposits will now be, for the first time, massively dominated by those of recent human origin - especially the release of carbon and other greenhouse gases as a consequence of increased burning of fossil fuels - as opposed to those due to natural changes.

Most scientists see the real start of the Anthropocene as beginning after the ‘Great
Acceleration’ in fossil fuel use from 1950 onwards.

During the 1990s, research projects on the Earth System, and on the nature of past climate changes, revealed that some past climate changes often came rapidly, after certain key ‘tipping points’ had been passed. This evidence of past ‘ecological volatility’ has allowed scientists to establish that, in the geological past, relatively small changes/stimuli have driven great - and sometimes abrupt - qualitative changes in the very delicately-balanced Earth System.

In 2007, a study began to identify which of Earth’s processes are most important to maintaining climate stability. The first results, published in 2009, dealt with the relatively-stable climate history of the Holocene epoch, during which humans developed agriculture.

Nine ecological processes - or ‘Planetary Boundaries’ - were identified as having maintained the safe operating space for humanity over the past 12,000 years.

The conclusion was that for 3 of these planetary boundaries - climate change, biochemical flows (especially nitrogen pollution), and biodiversity loss - Earth was already in the danger zone, and for 3 others was nearly there. In 2015, further research showed that the danger zone for land-system change had also been passed.

Some Earth System scientists argue that the emergence of the Anthropocene epoch is down to the activities of the entire human species. Others - like Ian Angus - place the blame on the particular economic system which has come to dominate global economic and political developments since 1945.

Those who take the latter view argue that the vast majority of these negative changes result from capitalism itself - and especially post-1950 capitalism which has been driven by what they term ‘Fossil Capitalism’’. Certainly, the changes in Earth System trends since 1950 produce remarkably similar-shaped graphs to the main socio-economic trends during the period 1950-2010:

Ecosocialists in particular see the Anthropocene not just as a biophysical phenomenon, but also as a socio-ecological phenomenon. In particular, it is associated with capitalism’s drive for profit and accumulation - even if that profit comes from unsustainable growth. However, whilst global capitalism tries to expand infinitely, the Earth is not infinite.

From the beginnings of industrial capitalism 200 years ago, it was clear to contemporary observers such as Karl Marx, Friedrich Engels and William Morris that capitalism had anti-ecological characteristics. However, the rift in the Earth’s carbon cycle was considerably widened by the invention of the internal combustion engine and then the aeroplane at the turn of the 19th Century. and 20th. Century - because this led in turn to a rapidly-growing market for petroleum.

Both US oil and chemical corporations were given a huge boost after 1945 via the Marshall Plan for European reconstruction. The Standard Oil Company, the biggest US oil company, benefitted most of all. This, and the discovery and exploitation of massive sources of cheap crude oil in the Middle East triggered off what became known as ‘The Golden Age’ from 1950 to 1973.

It was this which made the Great Acceleration possible: between 1976 and 1973, the world consumed more commercial energy than had been used in the entire period from 1800 to 1945.  History since 1950, as far as the Earth System perspective is concerned, has largely been an account of the expansion of fossil capitalism into every aspect of life and every part of the globe.

The gross inequalities arising from global neoliberal capitalism are not just economic - they also relate to unequal exposure to the dangers of climate change and its resulting extreme weather events. Globally, 99% of weather disaster casualties are in developing countries, and 75% of them are women. The Global South suffers far more than the Global North, and within the South, the very poorest countries are hit hardest.

Even within the North, the same climate-change inequalities hold true - as was shown by the impacts and aftermaths of Hurricane Katrina in 2005, or Hurricane Sandy in 2012. No billionaires numbered among the casualties in the North, no corporate owners or executives in the South have to witness their children dying from malnutrition.

The first signs of serious climate-change impacts can be seen in the increasing numbers of people displaced by droughts, water-shortages, desertification and starvation. Incredibly, these mass displacements - and the much worse effects of climate change still to come - have led the US in particular to identify global warming as a ‘threat to Western security’!

In 2003, the Pentagon commissioned a study relating to abrupt climate change - the conclusion was that wealthy nations such as the US would need to build ‘virtual fortresses’ to avoid consequences such as skirmishes, battles and even wars over increasingly scare resources such as energy supplies, water and food. In particular, borders would need to be militarily defended against ‘unwanted starving immigrants’ from poorer countries seeking places of greater safety.  That is the stark scenario of the environmental apartheid which is already emerging.

This book, by Ian Angus, was published last year, and is an essential read for all concerned about climate change - and especially so for all ecosocialists.


Allan Todd is member of Allerdale & Copeland Green Party and a Supporter of Green Left & the Ecosocialist Network
Posted by Mike Shaughnessy at 05:15