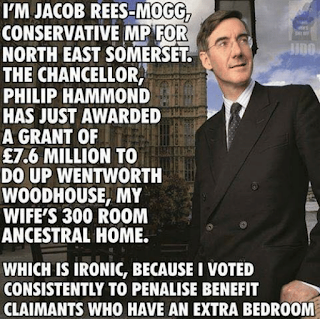 Rumours have been circulating that the Tory MP for North East Somerset, Jacob Rees-Mogg, is planning to make a move to replace Theresa May as Prime Minister. He is second favourite for the job, behind Brexit Secretary, David Davis, according to the odds aggregator BetData. A survey of Tory party members on the Conservative Home website, makes Rees-Mogg favourite to be their next leader.

News arrives yesterday that May is considering giving Rees-Mogg a ministerial role, and perhaps replacing Boris Johnson as Foreign Secretary. This is an indication not only that Rees-Mogg’s star is rising amongst Tory MPs, particularly on the Brexit right of the party, but also Johnson’s fall from favour in the party.

May only gave Johnson the Foreign Secretary job, to stop him causing her problems from the back benches, but she probably feels the danger has passed, and indeed Rees-Mogg is now the main danger to her continuing as leader.

The son of (Lord) William Rees-Mogg, a former editor of The Times and life peer, Rees-Mogg junior attended Eton School and Oxford University, before taking a job in the financial services sector in the City of London. After several unsuccessful attempts at becoming an MP, he was finally elected as Tory MP for the safe seat of North East Somerset in 2010.

To say Rees-Mogg is somewhat eccentric, is something of an under statement, with his posh background and accent, he reflected on his inability to get a safe Tory seat, before 2010, saying:

"I gradually realised that whatever I happened to be speaking about, the number of voters in my favour dropped as soon as I opened my mouth."

As the Tory candidate for the traditionally Labour seat of Central Fife, Scotland, in 1997, he was ridiculed for driving around in a Mercedes car and taking his former nanny canvassing with him.

In Parliament he has gained a reputation for supporting strange causes and for seemingly endless filibustering speeches. In a debate on the London Local Authorities Bill on 7 December 2011, he said that council officials who have the power to issue on-the-spot fines should be made to wear bowler hats.

He has also revealed that he stands to attention in the bathtub when the national anthem is played on BBC Radio 4 (at midnight).

And as the above meme informs us, he also secured £7.6 million of tax-payers money to do up his wife’s family mansion in Yorkshire.

Rees-Mogg is a longstanding Eurosceptic, and in 2013 suggested that the Tories should cooperate electorally with UKIP. His stance on Brexit is what is fuelling his recent rise to prominence with that wing of the Tory party.

Rees-Mogg was dubbed the "Honourable Member for the early twentieth century" by Quentin Letts, a journalist for the right wing Daily Mail, for his traditionalist views. Would the Tories be so daft as to elect someone like this as party leader?

Well, the journalist and Tory member from the liberal and Europhile wing of the party, Matthew d'Ancona, thinks they might be. Writing in The Guardian he says:

The Tory party “is taking seriously the idea of Jacob Rees-Mogg as May’s prospective successor. What would once have been an amiable joke is now a measure of the Conservatives’ drift into an orbit of their own creation, the radio signal from Earth growing weaker by the day.”


Bring it on, I say. I don’t think the British public will be able to identify with such a posh Tory twit as Rees-Mogg, even in these strange electoral times. No wonder Theresa May has been able to hang on as leader after the disastrous recent general election. Who would replace the hapless leader, looking at the contenders?