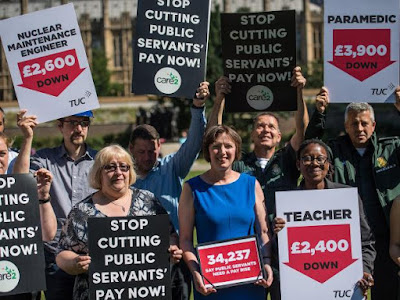 Rumours have been circulating ever since the Tory government lost its Parliamentary majority at this year’s general election, that the government is to re-think the 1% cap on pay rises for public sector workers. Today came news that the cap will be lifted from 2018-19 onwards for most public sector workers, with the exception of the police who will get a 2% rise and prison officers who will get a 1.7% rise. The Prison Officers Association, who represent those working in prisons, say 1.7% (inflation is at 2.9%) is not enough and will ballot for strike action.

The government’s divide and rule strategy cannot be allowed to succeed when all public sector workers have suffered huge pay cuts since the Tories got into power in 2010, and introduced their unfair pay cap. The Unison general secretary, Dave Prentis, is quoted in The Guardian as saying:

“In the first six years of Conservative rule, public sector pay rose by just 4.4% yet the cost of living soared by 22%, and to rub salt into those wounds, the pay of top bosses rose by a third in one year alone.”

The public sector unions support ending the pay cap, including those that represent health workers, teachers, civil servants and local government workers. Calls are being made to coordinate industrial action across the public sector, which threatens to bring the country to a standstill. Len McCluskey, the general secretary of UNITE said coordinated action from public sector workers was “very likely and very much on the cards”. He even said that unions might break the law on 50% turn out for strike ballots, introduced earlier this year by the government, which further tightens laws allowing industrial action.

If the 1% cap does remain in place, then the value of median public sector earnings will fall a further 3.9% behind inflation (CPI measurement, 6.9% on the old RPI measurement). Average earning across the economy as a whole are expected to rise by 8.5% meaning public sector pay will fall even further behind private sector comparators.

In addition, where I work, since 2010 pension contribution rates have increased and you need to work an extra five years to get the full value of your pension. On average these increases in pension contributions have reduced take home pay by around a further £1,000 per year.

To make matters even worse, there has been no incremental pay progression on pay scales. I have worked in the same job now for over four years, and I am still at the bottom of the pay scale. If someone on my grade were to start tomorrow, they would be on exactly the same pay as me, which doesn’t seem fair at all. It also means that those lucky enough to be higher on a pay scale than me, get paid more for doing the exact same work, with no prospect of this gap ever closing. This is all despite promises from management that the issue will be addressed since 2014.

We know that the Tory government has an ideological dislike of the public sector, and have privatised many services over the years, usually to the detriment of the services provided, where making a fast buck is the only thing that matters. The public service ethos, is at best, viewed as some sort of quaint relic of the past. But the fact remains, that public sector workers do try to do their best for the public that they serve, under extra pressure from spending cuts imposed by the government on providing these essential services.

Unless the government changes its tune, public sector workers will be more than justified in coordinating a massive withdrawal of their labour. It would demonstrate to the government, and to the public at large, just how vital the work they do is. One day without us, might be the slogan, or maybe one week without us will have a more forceful effect. Enough is enough, treat public sector workers with respect, and give us a long overdue decent wage rise, now.
Posted by Mike Shaughnessy at 10:23