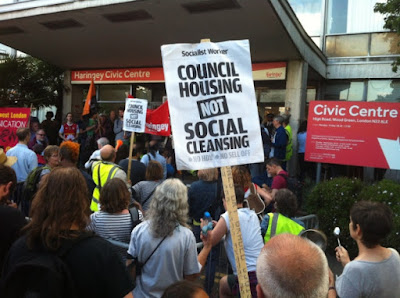 As previously reported on this blog, Haringey Council in north London is planning to go ahead with a £2 billion redevelopment of its public housing stock, gentrifying neighbourhoods and pricing local people out of living in the area. But a grassroots campaign against Haringey Development Vehicle (HDV) has been building.

The coalition of people, groups and political parties across the borough for social housing and against social cleansing, and now includes leaseholders in the west of the borough who are being compulsorily purchased to make way for the corporate-led demolition and re-development. This coalition includes the local Labour Party, local Green Party, local Lib Dems and tenants and residents associations and community groups, and trades unions.

Haringey council is controlled by the Labour Party. Haringey which has the largest constituency parties of the Labour Party anywhere in England is now a test bed on where politicians stand on the need for decent social housing and against social cleansing. Labour Cabinet members even are, at least in one case I know, starting to dissociate themselves completely from the HDV.

Both of Haringey’s Labour MPs, David Lammy in Tottenham and Catherine West in Hornsey and Wood Green, oppose the development.

Partly because we found out from a Freedom of Information request, that there has been a secret ‘shadow’ inner cabinet process of meetings with Lendlease, the preferred developer, from before the point of them being agreed as preferred bidder for the contract on HDV. This included the member recently appointed to be on the putative HDV Board, Cllr. Elin Weston who is now the lead member for children and families.

I crowd funded £25,000 to pay for legal fees for a Judicial Hearing which will be held in the High Court - Royal Courts of Justice on The Strand - on 25 and 26 October, where there will be a presence outside from 9:30 on 25th.

This could lead to a landmark decision on how Councils, through their Cabinets, make decisions on property deals with big developers altering the whole nature of communities, at the expense of the less well-off and poor, as has been happening across London and mainly by Labour councils. Issues in front of the court include lack of basic democracy, consultation, equalities impact, commercial secrecy and fair process.

There is a march and demonstration in Haringey this Saturday, 23 September, against HDV. Folks from elsewhere in London will be attending too (e.g. Cressingham Gardens, Lambeth in south London, who are campaigning against a similar development in their borough and who have also been in Judicial Review).

The march starts at Tottenham Green, at 12 noon and onto Ducketts Common (site of the massive defeat of the NF by the community in the late 70s) down Green Lanes - one of the last roads that hasn’t been totally taken over by corporate franchises - and finishes at 2pm at the Manor House tube end of Finsbury Park. Sian Berry, Green Party London Assembly Member, has agreed to speak at demo/end of the march.

There is also a benefit gig with Potent Whisper and others at The Beehive pub in Tottenham from 7pm on Saturday evening. The film Dispossession, The Great Social Housing Swindle is being shown at the Haringey Independent Cinema in West Green this Thursday evening.

Immediately at risk are 1300 homes on Northumberland Park estate, Tottenham, behind them are hundreds and hundreds more on multiple estates, this is people's homes, this is the reality of London in 2017.

A good presence on the demonstration this coming Saturday will be really important to keep up the momentum that is building, especially given what is now happening in the local Labour Party. Support this campaign against this cruel social cleansing operation which is threatening to spread to many other parts of London.