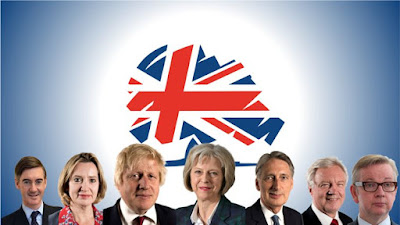 How did Britain get into this mess? We are the laughing stock of Europe, and no doubt many other places around the world. A country once renowned for its stability, pragmatism, tolerance and distaste of extremist politics, now represents something like the polar opposite.

The latest instalment of this national embarrassment is Foreign Secretary, Boris Johnson’s public disagreement with other government ministers, including the prime minister, over arrangements for our exiting from the European Union (EU) and is classic farce. But, as I say, this is just the latest comedy sketch in a long running show, so where did it all begin?

The Tory Party has been riven with infighting over things European since at least the late 1980s, and as former leader and prime minister, David Cameron, famously warned his party when in opposition, they should stop ‘banging on about Europe.’ They did a bit, but for a price.

Cameron had to promise the Tory Euro-sceptics a referendum on Britain’s membership of the EU, to keep the peace in the Tory Party. He got lucky in some ways when he became prime minister in 2010. His government had no overall majority, so he had to rely on the pro EU Lib Dems to govern. This was his excuse to the Tory Euro-sceptics for not trying to hold a referendum in that Parliament.

But he had to promise one for early in the next Parliament after 2015, if the Tories won a majority. My bet is that Cameron didn’t think he would get a majority, and so would not have to follow through on the referendum pledge. But he got unlucky, and the Tories did indeed get a small majority at the 2015 general election.

To buy a bit more time Cameron said he would first try to re-negotiate our terms of membership of the EU, and then put this to a vote. He didn’t get any meaningful concessions though, which no one really expected him to, and so we had the referendum in 2017. Cameron supported the Remain campaign, but the public voted the other way.

Let us not forget, there was no great groundswell for a referendum on EU membership, but UKIP were picking up votes, mainly from Tory voters, and Tory MPs, particularly the Euro-sceptics worried about this, and they saw their chance of forcing Cameron’s hand. The banging on about Europe was back with a vengeance.

I have never been a fan of referendums, which reduce often complex issues down to a binary choice, and where the rival campaigns generally boil down to the lowest common denominator. Such was the case last year with the EU membership one.

The fact Cameron even contemplated such a high risk strategy with the country’s well-being is a measure of the grip the issue of Europe has in the Tory Party. Indeed the EU has been a matter of internal Tory Party management since John Major became their leader in 1990. Everything that has been played out in British politics since we got a Tory government in 2010 has been dominated by the anti-EU tantrums of the Tory Party right.

Our current hapless Tory prime minister, Theresa May, can’t cope with the issue either. She voted to Remain, then following Cameron’s inevitable resignation, she won the leadership as her rivals ran around stabbing each other in the back. May played virtually no part in the referendum campaign, which tells us that she thought we would vote to remain, but didn’t want to spoil her future chances of the leadership, by being too vocal about it.

Boris Johnson showed no sign of wanting to leave the EU, as even his father and sister have said, before the referendum campaign was called. He probably thought we would vote to remain but he positioned himself for a future tilt at the leadership of his party. This is demonstrated by him having no plan in place whatsoever for what would happen after Brexit. It was pure political opportunism.

The backdrop to this shambles is of a country with the lowest GDP growth in the EU and G20, a devaluation of our currency, inflation up, wages stagnating, national debt almost doubled to a historic high of nearly £2 trillion, personal debt at a record high, public services cut, a spike in xenophobic hate crimes and our international reputation damaged. In response the Tories are fiddling while Rome burns.

So there we have it. Tory obsession with a niche political issue, and personal political ambition, has led us to this sorry path we find ourselves on today. The Tories don’t give a fuck about this country, all they care about is themselves. Incompetent, yes, traitors even?

Posted by Mike Shaughnessy at 10:19