Millwall Britain and the EU – ‘Everyone Hates Us, But We Don’t Care’ 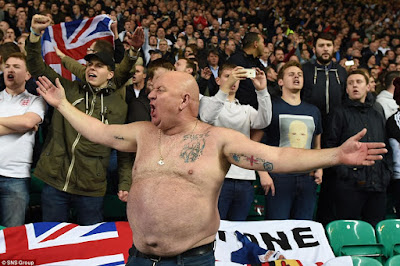 When the shambles that passes for negotiations with the European Union (EU), over Britain’s exit from the organisation looks to have reached its lowest ebb, somehow, it just gets even worse. Yesterday’s Home Office paper on the UK’s future immigration controls from EU countries, leaked to The Guardian, is a case in point.

The paper outlines an immigration policy, which presumably will not come into force until any transitional period, currently suggested by the government to run for a further two years beyond the Article 50 deadline of March 2019.

The policy would offer only short term work and residency rights, for up to two years for what the government will determine is ‘low skilled’ work, and up to five years for highly skilled workers. It also leaves open a possibility of extensions and even full residency, but nothing concrete. In fact the paper leaves the question open, on what will happen after the transitional period of EU membership ends.

The paper also scraps the rights of extended families of immigrants to reside in the UK, with even spouses required to prove earnings of at least £18,600 per year. Residence permits will not be granted to jobseekers, so those wishing to come to the UK will need to apply from outside of the country, making it much more difficult to gain employment. The costs involved in attending job interviews alone, will put many off trying altogether.

Already an exodus of EU nationals from the UK is happening on the back of the referendum result and the upsurge in xenophobic hate crime and harassment, with some sectors, like building work, experiencing a 20% shortfall in skilled labour since the referendum.

The paper also reveals that the Home Office wants to crack down on EU students coming to the UK. The policy idea may please the most Neanderthal of leave voters, but it has upset almost everyone else.

Government ministers, Amber Rudd and Damian Green, have distanced themselves from the proposals.

And opposition politicians have been quick to condemn the proposals. Labour’s Yvette Cooper, chair of the home affairs select committee, said it was, “completely confused” and the London mayor, Sadiq Khan, said of the document: “It reads like a blueprint on how to strangle London’s economy, which would be devastating not just for our city but for the whole country.” The Green party co-leader Caroline Lucas described it as “economically illiterate and cruel”.

Employers have refused to support the proposals that they say will be damaging to the interests of their businesses. The government tried unsuccessfully to get bosses of FTSE companies to sign a letter backing the government’s approach, which was also leaked yesterday.

The European media has largely been hostile to the plans, with the London correspondent for the German paper, Die Welt, Stefanie Bolzen, saying it would “complicate the already arduous negotiations with leaders in Brussels, for whom the rights of EU citizens are the highest priority”.

The Italian daily La Repubblica said the call for enhanced controls and the use of biometrics, as well as the preference to be given to British workers, reflected a UK version of Trump’s “America first” pledge.

Florentin Collomp, the London correspondent of the French paper Le Figaro said the consequences of the proposals would be that “Europeans will no longer come to the UK to work. Brits will have to pick their cabbages and wash their elderly themselves.”

And then there are the EU nationals living in the UK, who, understandably feel threatened by the government’s latest proposals.

Dutch GP Sebastian Kalwij said he read the Dutch newspapers on a daily basis and “it’s evident that the reputation of the UK is in shatters”. He added: “It’s painful to see the course of self-destruction the present government has chosen.”

Alexandrine Kantor, a French engineer in Oxford, said: “I almost regret coming and settling in the UK… If I had known that in the future I would only be allowed to stay for three years I would not have come.”

Bulgarian Deni Stoqnova, a shop worker said “each of us migrants feel that hostile environment right now and we are not considered valuable to this country any more, no matter that we work and do not rely on benefits or help of your government.”

Not only is Brexit looking to be economically ruinous to the UK, but the country will also sustain perhaps irreparable reputational damage with our closest neighbours. Britain, and the British, perhaps more accurately the English, are heading for being the most unpopular people in the whole of Europe. But, as those charmless Millwall football fan's chant goes, we appear to be revelling in our unpopularity.