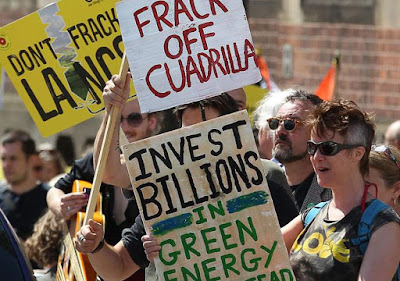 In my most recent blog about developments at the fracking protest at Preston New Road (PNR) in Lancashire, I’d suggested it was important to start disrupting the days of the various facilitators of fracking - and that, with the first horizontal frack in the UK about to take place, a national demo at PNR was an absolute priority.

A week that just kept on giving!

Well, the week or so that followed that blog post turned out to be a time that just ‘kept on giving’!! 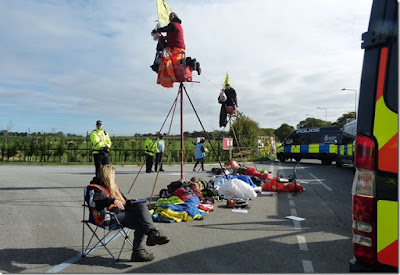 The start of the 9-person lock-on

On the same day, the 100 Women & the Lancashire Nanas paid a visit to the Tory Conference in Birmingham. 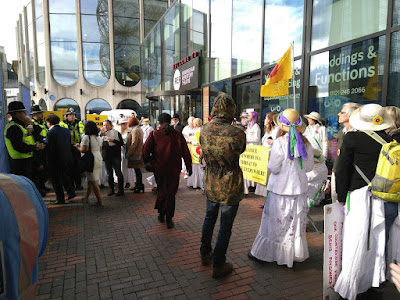 The 100 Women outside the Tory Party Conference

Thursday 4 October - yet another truck surf at PNR! 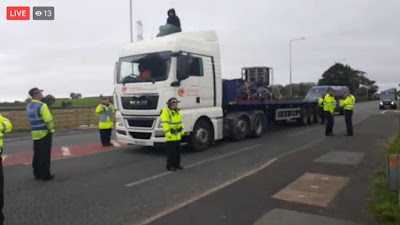 Friday 5 October - just hours after Cuadrilla had released a statement that they’d do the first frack on Monday 8 October, two local anti-fracking campaigners - Helen Chuntso & Bob Dennett - WON an interim injunction AGAINST Cuadrilla, which stopped them from fracking until a proper inquiry into the environmental & emergency safeguards that Lancashire County Council have (or haven't!) got in place!

Saturday 6 October - That Saturday saw over 300 people march, in solidarity with the FrackFreeThree, from Preston Railway Station to Preston Prison. The noise from drums & whistles easily penetrated the walls of the prison, & a text from one of the 3 currently imprisoned there confirmed they had heard the protesters. 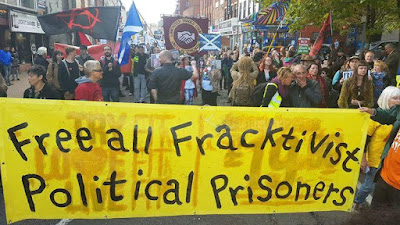 Demo in Preston for the FackFreeThree

Monday 8 October - Frack Free London decided to pay a visit to the Department of Business, Energy & Industrial Strategy in London, where they erected - under the new ‘permitted development’ rules the Tories are planning to push through - a 4m-high fracking rig!! 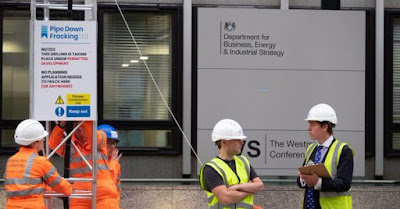 The Green Monday on 8 October saw what, hopefully, may be the first real ‘shoots’ of a Red-Green Alliance - not just against fracking, but also to do all that can be done to get rid of this Tory government: which, surely, has to include an effective but mutual Red-Green electoral pact?

The first speaker on Monday was Clara Paillard of Merseyside PCS trade union - and one of the founder-members of Red Green Labour: an ecosocialist group which aims to make the Labour Party ‘greener’. 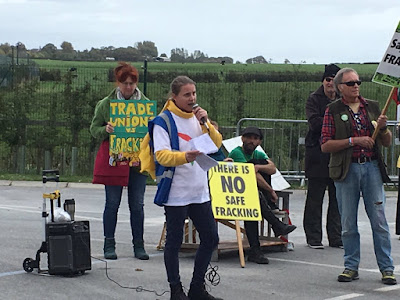 Clara Paillard, of the PCS union, speaking on Mon. 8 October

was followed, later in the day, by a visit from Rebecca Long-Bailey, Labour’s Shadow Minister for Business, Energy & Industrial Strategy. After she had spoken, several people present asked her to make a real effort to get Jeremy Corbyn to come up to PNR - & so honour his two promises to come to show his support.

In a week when the United Nations IPCC warned that we must reduce carbon emissions sharply over the next twelve years if we are avoid climate disaster, we are bringing it all together with a national demo on Saturday 20 October at Preston New Road, Lancashire.

Given that the recent IPPC Report has said that the world needs to urgently abandon all fossil fuel use, & that Cuadrilla will soon carry out its first frack, Frack Free Lancashire have called for a national demonstration to show that we say ‘No!!’ to fracking - not just in Lancashire, but anywhere in England.

The day will begin at Maple Farm Nursery [on the A583, PR4 3PE] from 11.00am onwards. There will be speakers, music and food. Friends of the Earth are backing this demo in a big way - including giving some help towards transport costs for those groups needing to book coaches and minibuses. You can find out more about that via this link:

More details - & updates - can be found on this Facebook events page:

For all these reasons - and more - we need YOU to make a special effort to come and join us at PNR on Sat. 20 October. Bring banners & placards - and LOADS of friends! In view of the IPCC Report, this demo must surely ‘trump’ any other event that weekend.