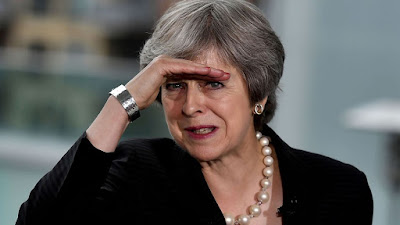 Theresa May’s piece in The Observer on Sunday, was ostensively aimed at Labour voters, with talk of antisemitism, threats to national security and the deselection threat to ‘moderate’ MPs, as evidence of Labour being unfit to govern. This narrative has been running for some time in the Tory supporting press, a smear campaign no less, of what May refers to as the ‘Jeremy Corbyn party’. But more immediately, she needs to win over ‘moderate’ Labour MPs to get her Brexit deal though Parliament, rather than voters.

In the Tory party in Parliament the numbers just don’t stack up for May’s Chequers Brexit plan, so she is really appealing to Labour MPs in thinly veiled code with The Observer piece. There is said to be up to 80 Tory MPs who are ready to vote against the Chequers plan, although some estimates put it as low as 20 in the end game. I suspect there are more than twenty. These MPs are from the hard Brexit wing of the Tory party, and probably prefer no deal at all, to the prime minister’s plan, even before the European Union (EU) starts chipping away at it, which it is sure to do.

What the most pro-EU Tory MPs will do, maybe a dozen or so MPs, I’m not sure, and it probably depends on what final deal May brings back to Parliament, but they might go along with it - perhaps. The Democratic Unionist Party (DUP) might well prefer a no deal scenario, as I think they want a hard land border with the Republic of Ireland, so May has to find a way of keeping them on side, which she has so far. She really has no other choice though, or the numbers in Parliament become even shakier than they look now.

There are 316 Tory MPs at present, with 10 DUP MPs sustaining the government, a total of 326. 326 is the magic number for a majority in the House of Commons, but one MP is the speaker, and seven represent Sinn Fein, who on principle take no part in the British Parliament historically, and show no signs of changing. This effectively reduces the number required for a governing majority to 318.

Labour has 257 MPs, excluding 6 who have lost the whip or are self declared independents. The Scottish National Party has 35 MPs, the Lib Dems 12, Plaid Cymru 4, and the Green Party one, and two other independents. An ‘opposition’ total of 317 MPs, who mostly look likely to vote against the prime minister’s Chequers plan. If this is the case, then it will take only a handful Tory hard line Brexit MPs to defeat whatever the government ends up with as a deal with the EU.

But as I say, I am pretty sure that more than 20 Tories will vote the against the government, and perhaps as many as 30 or so, and it could be even more than that, so May needs twenty odd votes from elsewhere at least, and Labour, together with its ex-MPs, now independents, is surely where May is hoping to get them from. It is not clear to me whether these independents will support the government though, as some may prefer a no deal scenario, so I don’t think these MPs can be taken for granted by the government.

The other target will be disaffected, and pro-EU Labour MPs, of which there are many, but from public statements from MPs like Chuka Umunna, they have expressed opposition to May’s proposals so far. It is possible that the EU will propose something more to their liking, but that might mean even more that 30 or so Tories rebelling.

Pro-EU Labour MPs will probably prefer to vote May’s plan down, so that Parliament could then manoeuvre to get no Brexit rather than no deal. In other words, postpone Article 50. This in turn might lead to a second referendum, which may see us remain in the EU. That is a more attractive prize to these MPs, even if they are nervous of Jeremy Corbyn becoming prime minister.

There is a cultural resistance amongst Labour MPs to the Conservative party too, not to mention an instinct for self preservation, that will make many recoil from supporting the government. Defeat for the Tories may lead to a general election giving Labour the chance to make a better job of Brexit than the Tories are ever likely to do.

May’s tactics look to be a forlorn attempt to square the Brexit circle, and is almost certainly doomed to failure.

Posted by Mike Shaughnessy at 09:41