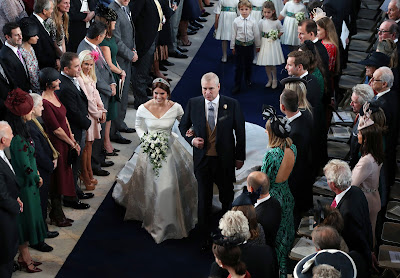 Princess Eugenie today married Jack Brooksbank, a “tequila ambassador,” whatever that may be, in Windsor. The lavish wedding was replete with carriage drawn by four white horses, and is estimated to have cost the public purse around £2 million, in security, policing and road closure costs, although it has probably cost UK tax payers a great deal more. Princess Eugenie is the daughter of the Andrew and Sarah, the Duke and Duchess of York, and ninth in line to the throne.

Eugenie, who is employed as a director at the London art gallery Hauser & Wirth, does not receive any money from the sovereign grant, which replaced the civil list, but is supported from her father’s private income. But who pays what for Royal marriages is a somewhat murky area.

Campaign group Republic, whose petition for no taxpayers money to be used has attracted almost £50,000 signatures, says that the cost to tax payers could well be considerably higher than the £2 million official ‘estimate.’ The wedding appears to be of similar scale as Harry and Meghan’s (Duke and Duchess of Cambridge) wedding earlier this year, a wedding that they say cost taxpayers over £35 million, and was officially estimated at £2 million. A spokesperson for the group added:

“Taxpayers deserve to know exactly how much money is being spent and which of our public services are being diverted to make the wedding possible. The government should make transparency the priority and publish a report of all costs to taxpayers.”

Eugenie doesn’t receive any money directly from the ‘Sovereign Grant’ but her father does, although I’ve been unable to find out how much exactly he does get. It is likely that he also gets money from his mother too, the Queen. Funding for the Sovereign Grant also comes from a percentage of the profits of the Crown Estate revenue (initially set at 15%) and will be reviewed every five years. Last year these profits totalled £304 million. This property though was in some way plundered in the past from whoever owned the buildings and land.

The Queen also generates income from her land and property portfolio. These assets are known as the Duchy of Lancaster and are held in trust for the sovereign. The Duchy is managed and run for the Queen and she receives all the net profits – about £12.5 million a year at the last count. This income is referred to as the Privy Purse. Again this land was plundered at some stage in history by the Royals ancestors.

The Duchy of Lancaster is one of two royal duchies, the other being the Duchy of Cornwall which provides income to the Prince of Wales. The Prince of Wales is entitled to the annual net revenue surplus of the Duchy, which was worth £20.8 million last year. Prince Charles also receives money from the European Union’s Common Agricultural Policy.

All of which leads to staggeringly casual wasteful spending on the part of the Royals, Prince Andrew, for example, squandered £14,692 on a round trip to see the golf at Muirfield. His younger brother, Prince Edward, meanwhile, took a £46,198 charter flight to Sofia, Bucharest and Ljubljana. 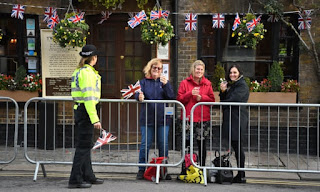 Although, Republic’s petition has attracted almost 50,000 signatures, which is pretty modest by on-line petition proportions, I noticed from television footage and reports, that there was only a sparse crowd that came out to watch proceedings, despite free tickets being offered to the public.

Personally, I don’t know anyone who is remotely interested in this wedding, of what is a fairly minor member of the Royal family. I’d bet most people didn’t even know who Eugenie was, until this wedding story broke. I do sense a growing ambivalence from the British public to the monarchy generally these days, if not outright hostility.

Some have tried to compare the policing costs of this wedding to that of public demonstrations, but organisers do provide their own stewarding and protest is a fundamental part of our democracy. The Monarchy and assorted hangers on are merely a reminder of our undemocratic constitution and practices.

It doesn’t seem to me to be right, when the population at large are being asked to tighten their belts further after eight years of austerity, with benefits cut for the poorest in the country, leading to a rising number of suicides, that such largesse with public funds should be permitted, when it comes to royal weddings.

Posted by Mike Shaughnessy at 09:56