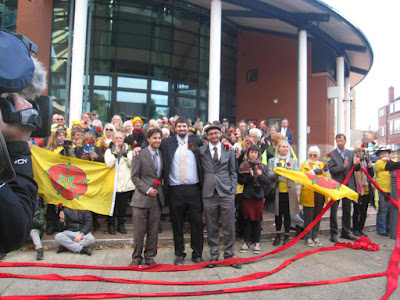 Although I’m the organiser of the anti-fracking Green Monday protests at Preston New Road, and am also the Membership Secretary of my local Green party, what follows is very much my own individual view, and must in no way be taken as necessarily representing the opinion of any other individual involved in the Preston New Road, Lancashire, protests, or of any organisation.

Fast forward to the past

This week, Preston Crown Court - or, to be more precise, Judge Robert Altham - took us back to 1932. For the first time since the Kinder Scout Mass Trespass, environmental protestors have been sentenced to prison for the offence of Public Nuisance. Though 7 peaceful environmental protesters were jailed for 28 days in 1993, for their part in the 1992 Tywford Down protests (against the building of M3), they were imprisoned for breaching an injunction in which they were named - not for Public Nuisance.

The Frack Free Four - Richard Roberts, Simon Blevins, Rich Loizou and Julian Brock - had previously been found guilty of Public Nuisance because of their involvement in what (so far!) has been the UK’s longest anti-fracking protest in July 2017, during Reclaim The Power’s month of anti-fracking Rolling Resistance. The 4 protestors had climbed onto lorries delivering pipes to Cuadrilla’s shale gas site at Preston New Road - and had prevented the lorries from delivering those pipes for a total of 99 hours, 31 minutes:

Judge Altham handed out prison sentences of 16 months to Richard Roberts (who had stayed on his lorry for a staggering 84 hours, 19 minutes!) and to Simon Blevins; whilst Rich Loizou received a prison sentence of 15 months. Julian Brock received a 12-month prison sentence, suspended for 18 months. The 3 sent to prison are the first people in the UK to be jailed for taking part in peaceful anti-fracking protests.  The crowd of about 60 anti-fracking campaigners, who had gathered outside the court for the start of the hearing, were shocked by the severity of the sentences:

One of the defence lawyers, Kirsty Brimelow QC, referred to an earlier ruling by Lord Hoffmann, who had said:

“It is a mark of a civilised society that it can accommodate protest.” 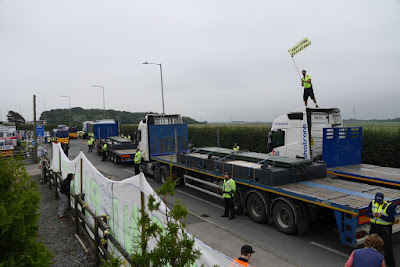 But, clearly, the UK doesn’t seem to be able to accommodate even entirely peaceful protest. As was pointed out in court, the motivation of the Frack Free Four was to act for future generations and the future of the planet; and, at all times, this was an entirely peaceful political protest against an industry that has been either permanently or temporarily banned in many European countries.

After the sentences were handed down, Rosalind Blevins, mother of Simon Blevins, had this to say:

“My son and the others were working under a social conscience for the good of the planet. I am proud of them for standing up against climate change. There is no doubt about climate change. 98% of scientists agree that climate chaos is happening. We have all got to stand up and reduce our use of fossil fuels now.”

Living in a ‘Banana Monarchy’

The severity of these sentences is just the latest in a series of democracy red lines that have been crossed which, I believe, has turned the UK into a ‘banana monarchy’ where freedom is increasingly eroded and corruption is rife. For instance, apparently Judge Altham didn’t think there was a possible conflict of interest in his dealing with the case, despite his parents being part of the Altham family business that supplies provisions to the oil & gas industry, including to rigs off the Lancashire coast!

·       Massive Tory election fraud in GE2015, via over-spending in 33 key marginal constituencies. This was totally unopposed by all opposition parties - including the Green Party. This was despite my Emergency Motion, calling for the Green Party to campaign for by-elections in all those marginal seats, being overwhelmingly passed at our 2016 Spring Conference. The ILLEGAL Tory government, in 2016, overturning Lancashire County Council’s 2015 decision not to grant Cuadrilla permission to frack at Preston New Road.

·       The wide-ranging injunctions granted against effective peaceful protests - no doubt inspired by the fact that, as a result of the Frack Free Four’s protests in July 2017, one of the lorry companies involved in the protest said it would not deliver to the site again.

On the positive side, it seems that, as a result of these prison sentences, more and more people are coming to realise just how our rights to engage in peaceful protest are being eroded. Consequently, there have been several comments pointing out just how far our rights are being reduced:

Miranda Cox, a campaigner against Cuadrilla’s operations in Lancashire and a Kirkham Town councillor, said: “This is a very dark day for British justice and for democracy.”

Whilst Greenpeace UK’s executive director, John Sauven, said: "It's a strange society that massively rewards those responsible for causing more climate change while putting those trying to stop it in jail. Ministers have changed laws, taken away homeowners' rights and distorted the planning process to make way for the shale industry, yet it's four peaceful protesters that get punished for climbing on a lorry.”

Green Party MEP, Keith Taylor, who has campaigned against the onshore oil and gas industry in south-east England, said: “Any government that conspires with the dirty fossil fuel industry against its own people is rotten to the core. Dissent is not a crime in any country with a political system fit to be called a democracy. Consequently, the sentences handed to the frack-free four are chilling.”

But it seems that things may get worse before they get better: just the other day, a young female protester’s arm was broken by a police officer at Preston New Road: 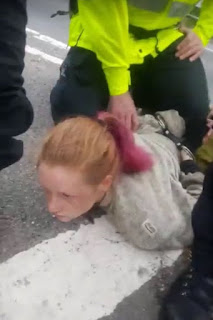 Young anti-fracking protester at PNR, whose suffered torn ligaments and heavy bruising to her arm during her arrest

Yet further evidence, if it were needed, how the fracking companies and their facilitators seem intent on destroying our democracy, as well as our planet.

Spread out and disrupt

The injunction has clearly greatly reduced the number of people prepared to continue participating in effective non-violent direct action. Plus, once fracking actually begins at PNR, it will be increasingly unhealthy for protesters to stand outside the fracking site’s gates. In part, this will be because of the greatly increased diesel traffic that accompanies fracking.

In addition, whilst wells are being fracked, the flaring process - likely to take place 24 hours a day, 7 days a week - releases massive amounts of methane into the atmosphere. Government ‘regulations’ also allow other chemicals to be released: including benzene, acrylamide, ethylene oxide, toluene, bisphenol and several radioactive substances. Most of these are known human carcinogens which are linked, among other illnesses, to breast cancer and myeloid luekemia.

For all these reasons, it makes sense to start to widen out the scope of anti-fracking protests. Instead of focussing almost exclusively on the perpetrators of the climate crime that is fracking, maybe the time has come to take our protests to the many facilitators of fracking.

In fact, an excellent start along such lines has already been made by the 100 Women group from Lancashire: they paid a visit to Parliament Square on Wednesday 12 September; and, on Monday (1 October) will be taking their anti-fracking protest to the Tory conference in Birmingham:

However, I would suggest much more is needed: in particular, to disrupt the days of those disrupting our local communities and our planet’s climate. Certainly this is the lesson I have taken from the two Greenpeace actions I was part of this summer: one against Barclays Bank (a facilitator of new toxic tar sands pipelines in North America); as well as one against VW (a perpetrator of air pollution). Both actions were entirely peaceful - but also highly disruptive of the working day.

Possible ‘legitimate targets’ for anti-frackers include government offices; Parliament, for approving changes to planning regulations; the financial institutions lending money to fracking companies; the High Courts handing out injunctions and, now, prison sentences; and the police.

If the dirty energy companies, and their many facilitators, think injunctions, prison sentence and ‘robust’ policing will stop the movement to protect our water, communities and climate from fracking, they are in for a surprise!


What is to be done now?

More immediately, though, we need to begin planning - NOW - for what we do once Cuadrilla have finally managed to carry out their first frack at Preston New Road.

What’s needed is a BIG national protest demo at PNR as soon as possible after that first frack.  Ideally, this should be on a Saturday, as this will enable as many people as possible to attend.

As well as members of other anti-fracking groups, activists of local Greenpeace and Friends of the Earth groups, and Green Party members and supporters, we really need to maximise the number of Labour Party and trade union branches.

We need to show - in a highly visible way - that the reason the Frack Free Four were given prison sentences was because there is no social licence for fracking.

To do that, we need to start contacting all relevant groups and organisations - NOW.

There is no time to waste.

“The powerful only seem powerful because we are on our knees. Let us rise!”

Allan Todd is a member of Allerdale & Copeland Green Party, an anti-fracking activist and a Green Left supporter
Posted by Mike Shaughnessy at 09:45