Tory Activists Turn Against May – Expecting Labour Victory Next Time 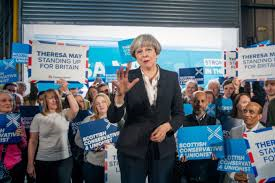 The knives are being unsheathed in the Tory Party after Thursday’s electoral humiliation turns into a search for scapegoats. With the prime minister’s special advisors, Nick Timothy and Fiona Hill the first heads to role, Theresa May looks to be heading for the same fate.

Former Tory Chancellor, George Osborne (not a fan of May’s by any stretch of the imagination of course) has called her a ‘dead women walking,’ in an interview with Andrew Marr on BBC TV today. If you want a good laugh visit The Telegraph, the house journal of the Tory Party, and read what they are saying. It is not at all complimentary.

But disquiet is not contained in the upper reaches of the Tory Party. A snap survey by the ConservativeHome website on Friday and Saturday, where Tories activists congregate, finds 60% want May to resign in the next few months. Here’s a selection of the comments:

‘announce that you're off to retirement. You're a decent person - but the wrong person.’

‘she has produced a really nasty election result and looks like doing the same in Brussels.’

‘The likelihood is that there will be another Gen Election sooner rather than later and she clearly has very little ability when it comes to campaigning.’

‘Her woeful lack of political judgment has been exposed. She is now a liability to the party.’

‘It is clearly untenable for her to stay. The timing is the issue.’

‘The fact that Mrs May judged them (Timothy and Hill) as fit for the job after 10 years of knowledge of them, also makes her unfit as a PM.’

‘She cannot be allowed to lead us into another GE is the only thing I am certain of and I voted that she should go.’

‘She is a wooden performer, unable to think on her feet, who was forced to resort to soundbites….That is why we have got to remove her.’

‘I only voted no cause there wasn't a 'yes but not right away' option.’

And some even sweeter comments if you are a Labour supporter, like this one:

‘The next GE will see a Labour majority and the longer the Conservatives try and delay that election the heavier their defeat will be. The choice is between losing narrowly to Labour in a year's time or less and hanging on for 4 or so years and suffering a 1997 style landslide defeat .’

To further rub things in, Survation, the polling company who were closest to getting result on Thursday right, has published its first post election poll and it shows a 6 point Labour lead.

The comments on Conservative Home make it clear that May can’t carry on for much longer as prime minister, but the Tories are fearful of a new election being won by Labour, so they want to avoid one anytime soon. Although, if the above comment is anything to go by, some think the longer they leave it in calling another election, the bigger the defeat will be. A cheery thought, if they do hang on for a while.

The only problem with removing May now, is that there is not a consensus on who should replace her. There doesn’t seem to be much appetite for a Boris Johnson premiership, but that is maybe who they will end up with. I think Corbyn will beat Johnson.


My bet is, that May will announce within a week or two that she will be standing down, and the Tory Party will elect a successor. Then in the autumn or next spring we will have another general election. The odds now look like Labour will win it.