There is a Magic Money Tree - It is called Fair Taxation 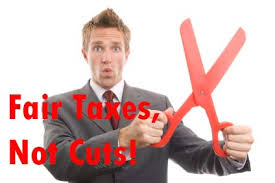 On last night’s BBC TV Question Time Leader’s Debate, between the Labour leader, Jeremy Corbyn, and Tory leader, Theresa May, the ‘there’s no magic money tree’ line was trotted out by May. It was rather condescending I thought, to answer the concerns of a nurse in the audience who asked about her pay and conditions of work. May was using the tried and tested, ‘we have to live within our means’ line, and that there is no real alternative to cutting public sector pay.

This line has been very effective in the past in dismissing anyone who suggests there is indeed an alternative to the Tories austerity measures dating back to 2010, as a fantasist, or at least not credible in economic prudence. The truth though, is that how we tax and spend the proceeds raised is entirely a matter of political choice. That the Tories slash public spending and decrease taxation on the wealthiest individuals and global corporations, is just one approach, and on the evidence of the last seven tears, is not even an effective let alone fair one. 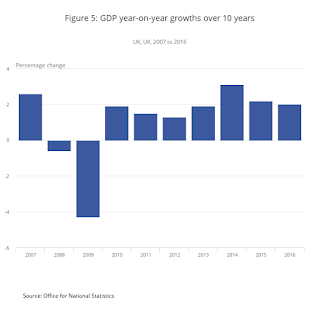 If we look at the graph above, which shows UK GDP figures from 2007 to 2016, you will see that since the Tories came to power, in only one year, 2014, has GDP been better than in 2007, when the economy was beginning slow into recession from the third quarter onwards. So it is stretching it a bit to argue, as the Tories do, that they are somehow some kind of economic geniuses. By historical standards, their performance has been poor, much worse than Labour’s, until the 2008 global recession.

The more growth that is generated in the economy, the more the amount of tax revenue rises, regardless of actual tax rates. If you like, the pie gets bigger, and in theory all boats rise on the tide. Unless, the proceeds of growth are not shared around fairly, which is essentially what the Tories have done, by cutting taxes for the rich. The rich have gobbled up what little extra wealth the Tories have created, so they have failed on both counts. Low growth, unfairly distributed.

Labour aims to increase economic growth by borrowing (at historically low interest rates) to introduce a National Transformation Fund that will invest £250 billion over ten years in upgrading our infrastructure and our economy.

The chart below from the Equality Trust shows the spread of disposable incomes in the UK. Of course the richest 5% do considerably better than £100,000 per year. Such gross inequality, and then the poorest having the least disposable income, and expected to pay a higher marginal rate than the rich. 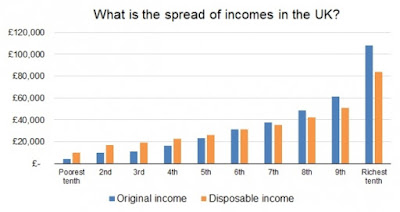 All of this has happened at the same time as the UK national has more than doubled to 88% of GDP. This can hardly be sold as successful, but the Tories cling to their magic money tree mantra, and mouth it repeatedly. It is all nonsense, coming from serial failures at economic management.

There is another way, and Labour’s (and the Greens) manifesto sets this out. Labour proposes to increase income tax rates for the top 5% of earners, those who earn more than £80,000 per year. As the manifesto states:

‘Only the  top 5 per cent of earners will be asked to contribute more in tax to help fund our public services. We renew our pledge not to extend VAT to food, children’s clothes, books and newspapers, and public transport fares.’

Corporation tax, which is what companies pay on their profits, will be raised back to 26% from the 19% the Tories reduced it to last year. In 2010 corporation tax stood at 28%, so this is not an especially radical proposal, but is much needed to help fund public services properly, from which corporations do benefit from. It seems only fair to me that should pay their fair share.

Labour also promises to clamp down on tax avoidance, but all parties promise that, but it often turns out to be difficult to implement effectively. We shall see.

And there you have it, the magic money tree. Not so fantastical really is it? Don’t listen to the Tory lies, we can have a fair system of taxation, it is only a matter of having the political will to do so.


Kick the Tories out on 8 June.

Posted by Mike Shaughnessy at 09:24