After Corbyn’s Re-election as Labour Leader – Where now for the Green Party? 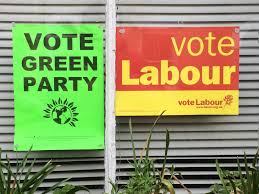 Congratulations to Jeremy Corbyn for his overwhelming victory in the Labour Party leadership election, for the second time in a year. Corbyn won convincingly, in all sections of the party, members, supporters and affiliates (mainly union members). You can see the scale of his success at The Swawkbox here.

But where does this all leave the Green Party? In recent years, the party membership and votes rose steadily, then quickly with the surge just before the general election last year. This progress was built on breaking out of our ecological niche, and pushing our left social policies to the forefront. It has to be said, that since Corbyn became Labour leader, membership of the Green Party has fallen back, with many ex Greens joining Labour.

Labour has even started to poach Green Policies, on fracking, rail nationalisation, environment to some extent, and are even considering the Citizen’s Income policy. Whilst this is good from the point of view of possibly getting these policies introduced, it also leaves the Greens out on a limb in terms of holding an exclusive constituency. Maybe this doesn’t matter, as long the policies survive, but they may get watered down, to encourage ‘unity’ in the Labour Party.

So, what are the options for the Greens? We could fall back on the old ecological style, and forget about the social policies? Climate change is not going away anytime soon, so there is an argument to be made here. Labour’s environmental policies are better than they were, but still unambitious and not really enough to address the issue. The likely problem with this move is it would be too narrow, and if people can get half way there policies from Labour, and more chance of them being implemented, they may well take this option. I think the social agenda must stay.

A second option would be to move to the political right, although this is a pretty crowded area already, with the Tories, UKIP and the Lib Dems all covering to some degree this terrain. Most Greens are of the political left, although not all, so I can’t see this being popular with most members. There are ‘lifestyle greens’ but this is a fairly small demographic, so has limited support amongst the general public. You wouldn’t expect me, writing on a Green Left blog to advocate this anyway.

Whilst, I might find it appealing for the Greens to move further to the left, further than Labour, I expect this would not be particularly successful electorally, and would probably cause discontent within the party, which is eco-social democratic in the main.

We could remain largely on the same territory that we have been on in recent years, as I don’t think the civil war in the Labour Party is over, and the Greens are at least united on policy issues by and large, and divided parties never win elections, and Labour is divided.

There are policy differences too, Jonathan Bartley, newly elected co-leader of the Green Party, sets out some of the main ones writing at Left Foot Forward: nuclear weapons, nuclear power, airport expansion and a fair voting system. Bartley also touches on the fundamental difference between Greens and Labour - economic growth and the centralisation of power. These are clear differences, and the Greens have better policies in all these areas. Bartley also calls for a progressive alliance between the Greens, Labour, Lib Dems and nationalist parties in Scotland and Wales. It doesn’t look like Labour is interested in this though in general, although some members are open to the idea.

One such Labour member is Jon Lansman, a leading figure in the Momentum group in the Labour Party. He is quoted from a fringe meeting at Labour conference at politics.co.uk as saying:

This is a new idea, and is worthy of further consideration. The policy differences mentioned above though do make this unlikely, although not impossible. There will be resistance in Labour’s ranks, I think, and possibly the Green Party as well. If Labour became serious about this proposal, then we will need to look seriously at it.

It would be better though, I think, if Labour committed to a fair, proportional voting system, then we can have our differences, but work together, maybe in coalition, and this has the added advantage of locking the Tories out power for good on their own.


Let the dialogue begin between Labour and Greens, and we will see where we get.
Posted by Mike Shaughnessy at 12:00