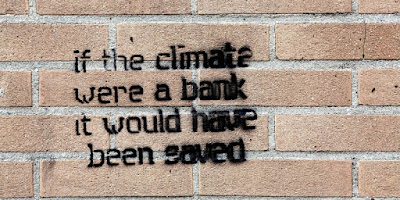 Researchers say the way to establish fair levels for everyone on global emissions reduction is for one of the major powers to stand up and set the benchmark.

There is a way to stop the planet from overheating. All it needs for is for Europe, or the US, or China to give a lead. New analysis suggests that if the 28 nations of European take a unilateral decision to limit carbon dioxide emissions to 67% of the 1990 level by 2030, then the rest of the world would be able to decide what was fair, and set targets for themselves.


But it need not be Europe, the researchers say. If the US set out to reduce emissions by 54% below the 2005 level by 2025, or if China aimed to get emissions down 32% below the levels in 2010, the same result would be achieved. Nobody would have to waste time arguing about common criteria for fairness in assuming the burden of cuts. A logjam would be broken.

The suggestion comes at a time when the world is still on course for overheating, despite the fact that 146 countries have submitted their national plans to the UN to reduce emissions.

Malte Meinshausen, senior research fellow at the University of Melbourne School of Earth Sciences, Australia, and colleagues from the Potsdam Institute for Climate Impact Research, Germany, and the International Institute for Applied Systems Analysis in Austria, and other European institutions make the suggestion in Nature Climate Change, as guidance for governments preparing for the make-or-break UN climate summit in Paris in December. 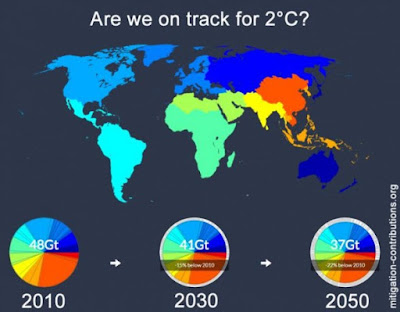 An interactive website sets out the mitigation challenges for G20 countries at https://www.mitigation-contributions.org/

“The world is united in wanting to fend off drastic increases in weather extremes and sea-level rises, but has lost its leaders in that endeavour,” Dr Meinshausen says. “The danger is that international negotiations are stuck in a gridlock about who should mitigate how much.

“If the world waited to find an approach that is considered ‘fair’ by everybody, the outcome would be ‘fair’ only in the sense that all are hit by climate change.”

The reasoning is straightforward. To prevent increasingly threatening high average global temperatures later this century, nations must agree on action to limit global warming to 2°C above pre-industrial levels.

“If we postpone action until we have universal agreement on a fair allocation of emissions reductions, the result will be fair only in that everybody will lose”

But the auguries are not good. Although the principle has been agreed, the devil as usual is in the details of how any agreement is to be implemented.

“At this stage, it seems utopian to assume that the international community will agree on a single allocation scheme,” the report’s authors say. “Here, we investigate an approach that involves a major-economy country taking the lead.”

Negotiations are complex because even though runaway climate change would at some point in the future be very damaging for many nations, and economically ruinous for some, mitigation also imposes economic costs right now. The argument is about how to share those costs.

One school of thinking – it includes the EU and the US − favours distributive justice at some future point, so that by 2050 carbon dioxide emissions would be roughly the same per head of population in every country in the world.

China, India and others think this is unfair. They want the cumulative emissions of the past to be taken into account, because otherwise those countries that have already burned fossil fuels, and achieved economic security, win on the deal:.

“If either the European Union or the US would pioneer and set a benchmark for climate action by others, the negotiation logjam about fair burden sharing could be broken,” Dr Meinshausen says.

“Our analysis shows that they would have to roughly double their current domestic 2030 emissions reductions target, which would certainly require substantial efforts. Yet it seems to be one of the few options to stay on track for eventually limiting warming below 2°C and fending off a drastic increase of weather extremes and sea-level rise.”

Countries will tend to opt for the least painful reduction scheme. Once the European researchers have stipulated what a major economy should and could do, the other countries would be free to follow with emissions reduction schemes that would take the world to the 2°C limit.

It may not seem as utopian as a uniform methodology, says one of the report’s other authors, Louise Jeffery, a climate analyst at the Potsdam Institute. “But it builds on the assumption that most economically relevant countries participate in one way or another, and ensures that the global efforts are successful in limiting warning to 2°C.”

It does, however, require determined go-it-alone action by one of the big economies.

The scientists make it clear that pledges – in UNspeak, intended nationally-determined contributions (INDCs) − so far will not be enough to keep warming from exceeding the 2°C limit long ago internationally agreed.

But the researchers also think it would be dangerous to delay until everybody has agreed a fair universal allocation of emissions reductions.

Another of the co-authors, Sebastian Oberthuer, professor for environment and sustainable development at the Free University of Brussels, warns: “If we postpone action until we have universal agreement on a fair allocation of emissions reductions, the result will be fair only in that everybody will lose – because climate change will hit us all.” – Climate News Network

Posted by Mike Shaughnessy at 10:45