Energy Revolution Is Possible... And It Would Only Take 782 Rich People To Pay For It 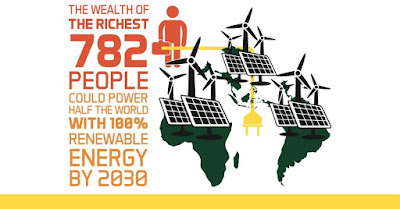 Less than 800 of the world's wealthiest people could power half the world with 100 percent renewable energy within 15 years, says forthcoming report

The personal fortunes of just 782 of the world's wealthiest people could power half the world—Africa, Latin America, and "most of Asia"—with 100 percent renewable energy within 15 years, according to a new report to be published Monday.

Broken down by continent, it would take the wealth of just 53 rich people to power all of Africa, and a mere 32 prosperous people could plug in the vast majority of Latin America.

Though the analysis from Friends of the Earth International (FOEI), a copy of which was shared with Common Dreams ahead of its release next week, does not argue "that the wealth of these particular individuals can or should be directly used to drive the needed energy transformation," the figures do reveal "a gross injustice" when it comes to global inequality that should serve as "a shocking and stark reminder that the finance for an energy transformation is certainly available."

However, the report points out: "The political will to drive the transformation is, on the other hand, shockingly absent," as evidenced by "weak pledges of emission reductions" issued ahead of COP21 climate change negotiations scheduled to begin later this month.

"This report is a wake up call for policy makers and governments," said FOEI program coordinator Sam Cossar-Gilbert. "Our world faces two destructive and entwined crises—growing inequality and climate change. The time has come to address them together."

A recent UN assessment found that emissions pledges made by member nations for the upcoming COP21 climate talks in Paris represent just half of what they need to be to keep warming under the 2°C threshold.

But groups including Greenpeace and Oxfam, as well as individual governments , are trumpeting the power of renewables to help reach global targets. Meanwhile, the International Energy Agency recently announced that renewable energy comprised nearly half of the world's power generation capacity in 2014, marking what it called a "clear sign that an energy transition is underway."

Yet the call from FOEI "involves not just changing the energy source from fossil fuels to renewable energy, but a deeper transformation including democratic ownership of renewable energy resources."

As Dipti Bhatnagar, FOEI climate justice and energy coordinator, declared: "Business as usual is now longer an option. We need an energy revolution."

For example, the report suggests that "many parts of the world can and should leapfrog large transmission grids altogether, opting for energy independence with local renewable generation and storage in micro-grids."

As John Farrell wrote for the Institute for Local Self-Reliance earlier this year, "[t]his approach works best not only because it marries authority and responsibility, leaving communities in charge of their own fate, but because it is a political strategy that builds a movement for more ambitious and rapid change in the energy economy."

And it's a way to combat both global warming and worldwide inequality, crises that FOEI sees as deeply intertwined.

"Climate change is a symptom of the dysfunction of the current system, especially the way that we produce, distribute, and consume energy," the report reads. "An energy system that fails to provide for billions of people now is clearly a major cause of catastrophic climate change and sky-high levels of inequality, all at the same time."

This work is licensed under a Creative Commons Attribution-Share Alike 3.0 License
Posted by Mike Shaughnessy at 07:17