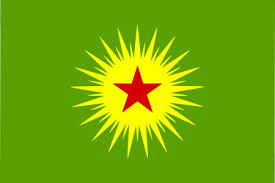 An 18 year old woman from north London has been sentenced to 21 months in a young offender institution for ‘intending to join’ a proscribed terrorist organisation,  the Kurdish Workers Party (PKK), who are fighting Islamic State (IS) in Syria. Silhan Özçelik who is of Kurdish origin became a supporter of the PKK at age 13 and had tried join the party, but who was rejected as too young to join at 16.

She left home last year leaving letters and videos saying that she had gone to fight with the PKK in Syria against IS. She said at her trial that this was to make her parents feel less ashamed, when in fact she was travelling to Belgium to kindle a romantic liaison with a man. She was arrested in Germany.

There are many troubling issues raised by this case. It is accepted that she never actually joined, or even got very close to joining the PKK, but intention is enough under the law. Young people say all sorts of things which they really don’t mean to do, so to be convicted of this type of ‘thought crime’ seems to me to be overly draconian, and lacking in real evidence.

That the PKK is on the proscribed terrorist organisation list is mainly at the behest of Turkey who has fought a war with the PKK in Kurdish areas of Turkey for many years, after their lands were effectively swallowed up by the Ottoman Empire and later colonial occupation as in Iraq. The PKK is not a jihadist organisation and recently have altered their philosophy to one very close to ecosocialism. They have followed the writings of Murray Bookchin, the founder of Social Ecology, which is very similar to ecosocialism, in northern Syria especially. There they have formed three autonomous cantons, which are run by people’s councils, which have equal representation for all religions and both genders.

The organisation fighting to defend these cantons is actually separate from the PKK and known as the YPG (Kurdish People's Protection Unit) although they have been helped by PKK fighters, as far I know the YPG is not a proscribed terrorist organisation. Indeed, the Daily Mail, of all newspapers, reported in June this year, in heroic tribute, that eight ex British army soldiers (all male), were intending to join the YPG. Referring to them as the ‘ISIS Hunting Club’, the paper reported:

An eight strong volunteer unit of former British servicemen are preparing to travel to Syria to fight against militants from the Islamic State terrorist organisation, it has been claimed.

The ex-soldiers - some of whom have Special Forces training - call themselves the International Volunteer Force and will fight alongside the Kurdish resistance in the north of the country.

Images posted on social media purportedly show the men taking part in special training exercises in Europe ahead of their journey to Syria, where they join an estimated 100 other Western volunteers to have joined the Kurdish peshmerga and YPG armies in the fight against ISIS terrorists.

There was no attempt, as far as I can tell, to arrest these men on ‘intention’ to join the fight, despite the matter getting national media attention, on the contrary, they were lauded for their courage and moral standing. How is this any different from what Silhan Özçelik tried to do, if this was her true intention?

The YPG is clearly not the same type of organisation as IS, notice that the PKK refused to allow her to volunteer to fight when she was 16, would IS have done that? I very much doubt it. And here was a young woman, offering to put herself in grave danger, to fight an outfit that is public enemy number one in European countries, and being jailed for her trouble.


It may not have been the most sensible thing to do, but what crime has she committed with her intention to fight to those psychopaths? The law is an ass, she should be freed from custody immediately.

Posted by Mike Shaughnessy at 09:15