The European Dream is Dead: What are we going to vote about in the British Referendum? 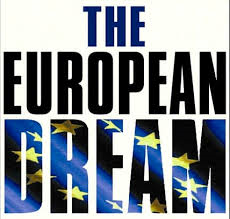 The European dream is being destroyed by those who claim to act in defence of that dream. The dream was already beginning to fade but the front of screen and back of screen machinations that have accompanied the “Greek tragedy” played out over the last six months and the eventual   “treaty of reparations” –or otherwise known as the “deal” – has killed the dream for me.

It’s salutary to go back to the beginning. As hardly anyone knows, the current EC grew out what was called the European Coal and Steel Community. It’s here that one can locate the European Dream.

Again as hardly anyone knows, 9 May is known as Europe Day. 9 of May is Europe Day because it was on that date in 1950 that what is known as the Schuman Declaration was launched and which laid out the key features of the European dream. A revisit to this is illuminating in terms of “progress to date”.
An element of the dream that no longer relates to reality. In treating Greece as an “outsider” we have seen the reemergence of an imperial and colonial mindset. It may yet come to German style “stormtroopers” being the response that explodes in Greece. It’s not just Greece, however, the EU may be united but it is unequal. It’s an EU dominated by Germany with several smaller states simply being vassals. The problem goes even deeper when you consider the impact of EU funds and how they have widened disparity between regions in the EU.
If you ignore the Balkans and Srebrenica, then this has held up well in terms of old style warfare. However, the Troika, the replacement of the elected government in Italy with an appointed technocratic boss, the bulldozing away of the Greek prime minister when he had the nerve to suggest that it might be appropriate to check out what the Greek people thought about the terms of the bailout being stuffed down the throats of the Greeks by France and Germany, the contempt with which the Cypriots were treated etc has just been warfare through financial markets and financial institutions like the ECB.
It's salutatory to remember that “black lives are worth less”- more African, Asian, Latin American, and Arab, people have died through conflict  since the Second World War than those  who died in the second world war. Europe in fact has exported war and the EU has financed state terror. Follow the money as they say and voila you will find that the EU arms industry is doing very well.
There is a huge democratic deficit if the European Institutional framework that has been established. Everyone goes round pointing out what important work the EP undertakes and how it is directly elected by citizens. The EP for its first 30 years simply rubber stamped 83% of what the European Council decided. The EC is the place where our elected leaders wine and dine and talk and make decisions without any accountability. Sure there is “cloak of accountability” provided by the phase “some decisions of the EC have to be ratified by national parliaments”. However, this just conveniently ignores the fact that the EC sits on top of a largely broken and corporate dominated party political system.

With Nato trashing the 1997 agreements with Russia regarding expansion of Nato and the “soviet bloc”, need I say more given the fact the phrase “cold war” has suddenly come back out of hibernation.
If you ignore the UN then this element of the dream may just hold up. The problem is that over 60% of European citizens have no trust in the supra national institutions that have been created.
This has turned out to be the exact opposite. The EU has institutionalised corporate democracy. Big business interest rule in Brussels, there is a revolving door mechanism from and to big business and the EU institutions. The expert groups that “advise” the EU institutions are dominated by corporate interests. Key texts produced by the Commission turn out to be just cut and paste versions of submissions made by vested interest groups.
In terms of capital and goods one could say that the dream has been largely realized but when it comes to labour then it’s a nightmare scenario with deportations now taking place regularly  between member states(e.g. Belgium is routinely deporting EU citizens without work). With the coming restrictions on access to welfare benefits for EU citizens, the free movement of labour will be reduced to one for those who can afford it.
Steel production has declined. A renaissance in coal is underway with Germany and Poland (or coal land as it is referred to in environmental circles), but this will be very short lived as China moves off coal usage. Growth for the past 15 years has been anemic and globally the EU is in decline with its share of the shrinking global trade set to decline further in the coming decades.  We have rising poverty in Europe. A whole new category of “in work poverty” has been created. We have had youth unemployment levels running at over 14% since 2000. Long term unemployment is growing. Indeed, given the current stagnation the EU has created structural unemployment as feature of the economy.
Far from improving the situation in Africa, it has initiated a new rape of continents like Africa through dumping of subsidized farm goods, through displacement of rural labour by the introduction of agri-business style agriculture which produces food for anyone but the Africans. It has fermented civil war through arms sales and bribes. It has participated in destroying countries like Libya and Syria through its so called “wars for democracy”. The saga of the migrants in the Med is just a visible sign of how much damage has been inflicted upon Africa.

So the dream is dead. What will we be voting for next year in our referendum? The issue is no longer just about whether or not any more power can be ceded to the EU institutions. Nor is the issue about what powers need to be repatriated.  It’s not about being pro- or anti-Europe. We need to dismantle what we currently have and re-establish the European project with a new dream. For that we need new dreamers of which there is simply a dearth at this moment in time.

Written by Haroon Saad who is a member of the London Green Party and a supporter of Green Left
Posted by Mike Shaughnessy at 17:02