As things stand, a positive alternative to austerity won’t be the main battleground in the London elections next year. But it should be. 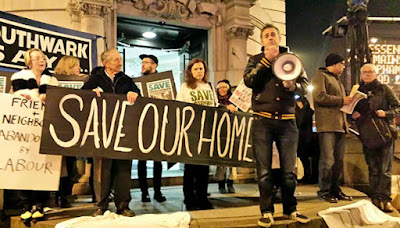 Jonathan Bartley speaks at a demo outside Lambeth Town Hall

Written by Jonathan Bartley who is the Convener of Lambeth Green Party and a Green Left supporter. Jonathan is a candidate for the Green Party for the Mayor of London and the London Assembly List.

When I was part of Jenny Jones’ mayoral campaign team in 2012, the focus was the usual issues of safer cycling, air pollution and London’s ongoing housing crisis. These are all important. But the problems are a symptom of a much bigger issue; every aspect of London life is being turned into a commodity.

London increasingly knows the price of everything, but the value of nothing.

Commercial haulage is prioritised over the lives of cyclists. Property speculation is encouraged at the expense of those who just want a decent home. Polluters are favoured over those who want clean air to breathe. Everything is assigned a price. The highest bidder wins.

Tory Mayoral hopeful Zac Goldsmith will try to move into ‘Green’ territory. He must not get away with it. It is his economic policies that are responsible for the great London sell-off. Labour and Lib Dem candidates will happily join in the collusion. We must fight it.

I want to be the Green Party’s mayoral candidate so I can stand up and say that the commodification of London life isn’t just economically deluded, it is socially and environmentally destructive.

As the Green Party’s Work and Pensions spokesperson, over the last couple of weeks I have attended three demonstrations to highlight what Zac Goldsmith’s cuts have been doing to the disabled.

I met with campaigners when they stormed the House of Commons during Prime Minister’s Questions. I attended Streatham Job Centre, to support those marching against the placement of therapists in job centres ( https://vimeo.com/131890530?ref=tw-share ). And on Tuesday I supported Disabled People Against the Cuts as they presented their petition at Downing Street over the pernicious closure of the Independent Living Fund ( http://www.morningstaronline.co.uk/a-51eb-Independent-Living-Fund-laid-to-rest/#.VZkPe_kzbIU ).

The Government is getting away with their cuts because human life itself has become a commodity. And under this Tory system, those who are disabled are worth less.

It doesn’t have to be this way. Take London’s public transport system for example. It is not really ‘public’ at all. Around 10% of London’s population are excluded from large parts of it because of their impairments. There is a 'Transport Apartheid' that would not be tolerated anywhere else.

But when the Paralympics arrived and we needed to impress the world, as it turned its gaze upon us, things changed. Magically ramps appeared in tube stations. Public sector staff were suddenly discovered to provide vital assistance.

Then they magically disappeared again when the games were over.

It confirms what we all know. There is enough money in the world’s fifth richest city. The problem is the political will to make things happen.

There is a chance in next year’s elections to show that there is an alternative.  During the general election campaign I challenged Iain Duncan Smith over his welfare reforms.

As the Government’s new £12bn round of welfare and other cuts bite harder, they will impact many more people. They will impact families claiming tax credits and child benefit, and those who rely on vital public services.   And when they do, many more will wake up to the reality of what is going on.

We have already seen this begin to happen where I live in Lambeth. There we successfully saved sheltered housing from the Labour’s Council’s plans to bulldoze it. Labour shrugged its shoulders and blamed Tory cuts.  But we fought for the residents – and won.

A few weeks before the general election I got a call from one of the residents, inviting me in for a cup of tea. Half way through my second biscuit, she pushed an envelope towards me. “We have got you here under false pretenses” she said. “We had a collection to support your election campaign” she said.
These are people who were not natural Green supporters. But they saw the threat that austerity presented. And they discovered that it was only the Greens who would fight it.

We have an aspirational vision to give to Londoners. London should lead the world. It should have world class public services. It should be the city of Good Jobs. And as austerity bites, more and more will want to hear our alternative. I want to be the mayoral candidate who delivers it.