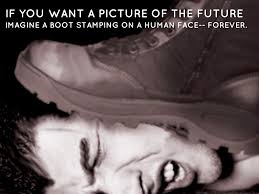 Only a week after the Greek people voted decisively against further austerity measures as the price for a financial bail out package from its European and international creditors, yesterday morning saw the total capitulation of Greek Prime Minister, Alexis Tsipras, to even harsher measures.

Backed into a corner, largely of his own tactical making, with Greece on the edge of bankruptcy and with the economy about to go into free fall, Tsipras bowed to the inevitable and conceded to what amounts to the financial colonisation of his country. What an unedifying sight this has made, ironically in the land where the idea of democracy was born. Over the last week or so watching events, I’ve been unable to get the image above out of my head. George Orwell’s description of the future in his classic book Nineteen Eighty Four, seems more vivid than ever before.

This vindictive deal calls for more public sector job cuts (including that of the cleaners that the new government reinstated in January), further cuts to pensions, a fire sale of Greek public assets such as ports and airports, sharp rises in sales taxes and reform of employment legislation to curb the influence of trade unions and reduce worker protections, including a law to allow ‘collective sackings’ of unruly workers. All of this will be overseen and supervised by unelected technocrats from Brussels.

The deal is still to be approved by the Greek parliament at the time of writing, and there looks to be a likelihood of opposition from within the Syriza party itself but it will pass with support from the old corrupt and dishonest parties of the opposition. Perhaps Tsipras will need to form a ‘national unity government’ if enough rebels and coalition partners ANEL vote against the plans. Ramsay McTsipras? A general election looks to be not far away, probably in the autumn.

Shocking though this episode has been in its sheer brutality, it is just an extension of a trend that began many years ago. When countries signed up the European Common Market, as it then was called, they necessarily signed away some of their national sovereignty. Subsequent treaties have reinforced and deepened this state of affairs, and on the horizon we have the huge TTIP trade deal with the US which looks as though it will make national law illegal if it gets in the way of corporations making money out of public services, for example.

The formation of the Euro with the straightjacket of requiring low levels of national government debt, whatever the prevailing state of the economy, is a further assault on what governments are able to do, regardless of the wishes of voters in any single country.

Britain of course did not join the Euro, and we have Gordon Brown to thank for that as Tony Blair was very keen indeed to take us into the currency. But this is the same Gordon Brown who was responsible for handing over the control of the nation's interest rates to an unelected body, the Bank of England Monetary Policy Committee when he took over as Chancellor in 1997. 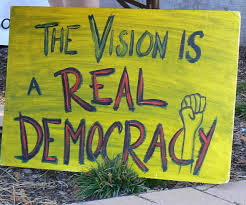 These democracy limiting measures are always taken to provide ‘stability’ which is a catch all word for we must do what big business and the money markets want us to do, or else we are punished by these forces with a lack of investment and slow or no growth in the economy and the resultant high levels of unemployment.

Anyone who suggests anything different is immediately labelled as being reckless with our economic welfare. Governments are increasingly disinclined to rock the boat and social democratic governments have all but given up doing anything other than the most piecemeal of tinkering with welfare policies.
So, the future looks bleak from a democracy point of view, but at least in theory we still do have the fragments of a democratic system and the people can, if they wish, take matters into their own hands. Even in Greece, the foolish obsession with the concept of staying in the Eurozone at all cost, could change. They will need to revert to a national currency first though, as the EU as we have seen, will have none of it in the Eurozone, although possibly that can change too, if the peoples of Europe want it to change.
For Britain too we have an opportunity to leave the EU in a referendum next year, but that would just be the start of enforcing the public will and some may judge that we can change the EU from within, with the support of other nations.

The choice is ours, do we want the crumbs from the rich man’s table or do we want freedom and true democracy? Tony Benn said that Hitler wrote in Mein Kampf that democracy inevitably leads to socialism. Of course Hitler wasn’t right about a lot of things, but he could see the power of the collective will to create conditions favourable to the majority of people, rather than remain in bondage to a minority social and political class elite.


It won’t be easy, but we the people have the power, are we courageous enough to use it?