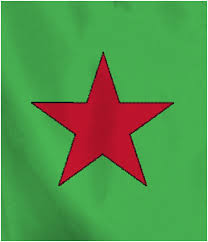 These 6 questions are posed by ecosocialist party Solidarity US. I'm meeting one of their comrades in early August in London.

1. How does ecosocialist politics differ from traditional socialist and labor politics? To what extent does the kind of ecosocialist orientation we need today reflect a continuity with, and to what extent does it represent a break from, previous ideological and programmatic perspectives of the revolutionary workers' movement?

Ecosocialism presents a variety of perspectives that are not necessarily harmonious with each other, just like socialism has never been unified. My own understanding of ecosocialism is that of the egalitarianistic (therefore anti-statist) variant infused with a conception of society as part of a larger, biospheric reality. Through this viewpoint, ecosystems are not regarded as reducible to social struggles and environmental degradation takes on as central a role as issues of social oppression.

With respect to fighting social oppression, ecosocialism is continuous with other forms of socialism and labor politics, but much more attuned to the totality that is a mode of production. For example, homophobia, racism, and patriarchy are therefore just as serious as class differentiation because they are part of the establishment and reproduction of class differentiation within the capitalist mode of production. I see the struggle therefore as having two fronts, one grappling with biophysical environments and the effects of human impact (constructive or destructive), the other with social struggles for an egalitarian world.

Science, technology, labor productivity and production all play a secondary role to matters of social reproduction in the transition to ecosocialism and in an ecosocialist society. At bottom, the problem is how to reproduce society in ways that are egalitarian and yet do not destroy the ecological basis of our collective existence. Understood this way, science/technology must be reconfigured to assist towards such ends but not to be merely reduced to them either; the process of discovery can occur without any direct relationship to social ends. Concepts of productivity and production per se might not be particularly useful in this regard, since the issue should be reproduction, subsistence, egalitarian distribution according to needs [and so forth].

3. Since the self-emancipation of the working class and other oppressed layers is central in the transition from capitalism to socialism, and therefore to ecosocialism, what do we think will motivate these social forces to see the necessity of ecosocialism? How does the ecological crisis affect the orientation of unions and their place in the class struggle? Beyond traditional kinds of demands and programs, are there other demands and programs that might supplement or perhaps supplant the traditional approach of unions?

If there were an answer to this question, we could account for all, or the majority, of workers’ thoughts, life conditions, and much else. Rather than understand the problem as one of motivation, it might be best to grasp it in terms of favorable conjuncture and the always necessary efforts at discovering or making connections and raising consciousness about such connections and, [on the basis of] such connections, facilitating the coordination of workers worldwide. One can be the issues of breathable and drinkable water.

I expect it would be easier to persuade most workers about the ills of fossil fuel combustion by pointing out how many people die prematurely from air and water pollution where fossil fuel combustion reigns. In this sense, concentrating on global warming is not an effective way of reaching most workers and making them care about environmental degradation. But there is a parallel struggle that involves the problem of most unions themselves.

4. How, if scaling back production is necessary, will ecosocialist strategy remain committed to meeting human needs? Or can we envision continued expansion and economic growth under ecosocialism, as the working classes and others in the industrialized nations have come to expect? If so, how does this differ from expansion and growth under capitalism? What will enable it to take place without an even greater destruction of the environment? If not, how do we ensure the generalized satisfaction of needs for all, including the equalization of living standards between the industrialized nations and the rest of the world?

The matter must be viewed as one of focusing on subsistence and redistribution and of showing that there is plenty resulting from that, since there is an overwhelming overproduction problem. Expansion at this point is unnecessary and is likely counter-productive both ecologically and for many people’s health. Involving people with the technical skills to treat waste, to deal with nuclear power plants, and much else, will be key. Without devoted ecosocialists with technological sophistication, there will be no revolution or transition, and no ecosocialist future (see also response to question 2).

5. What ideas do ecosocialists raise in the climate change movement? Are James Hansen's proposals (for example, advocacy of a "carbon tax" rather than "cap and trade") in some form useful for ecosocialists as transitional demands, or are they simply an attempt to solve the ecological crisis within the context of capitalism? What is the relationship today between issues that can mobilize traditional kinds of mass struggles, such as hydrofracking or the Keystone XL pipeline, and proposals to promote what some might term "life-style" actions (what others refer to as "prefiguration") such as personally using fewer resources, boycotting GMO foods and buying organic, putting a priority on recycling, creating/promoting urban gardens, food coops, and similar institutions?

In my view ecosocialists have gone about the task incorrectly. We offer largely vague and possibly ineffective ideas, especially because the focus is overwhelmingly on climate change (or actually one version of it, global warming). Climate change involves global averages of decadal regional averages. This is much too abstract relative to the everyday reality of most people. We also need scientifically competent ecosocialists, who are too few!

The most urgent task is to find ways of conveying scientific that connects with everyday problems people face in different circumstances. One thing that will certainly hurt the chances of ecosocialist movement building is to speak in terms of absolutes. GMOs, for example, are largely problematic, but treating them as an evil loses sight of the potential usefulness genetic engineering could have, if research were done properly and societies were not treated as guinea pigs.
It is not that a machine or set of techniques are necessarily the problem. It is the set of social relations that are. In regard to GMOs, for instance, what sets of social relations makes for their production in the first place?

There is also the wider ecological front, where the task becomes even harder. The issue is both prevention (e.g., pre-empting GMOs at the point of production, not just when the GMOs are consumed) and addressing existing devastation (e.g., nuclear power plants, minefields, or the increasing number of droughts in some parts of the world). For such challenges to be met effectively, one must be precise, specific, and able to find connections across the diversity of environmental degradation resulting from the capitalist mode of production.

6. Related to #5: What kinds of cooperatives that can be built today might be able to teach us something about a post-capitalist world? What role, if any, should ecosocialists seek to play in these communities?

There already exist many cooperative communities across the world. Some are not cooperatives, but entire communities, as in the case of some Indigenous Peoples. Ecosocialists should learn from them and be of help by providing connections between them, to specialize in some biophysical science as well as be conversant in social theory and radical leftist perspectives. Ecosocialists should be sure to jettison once and for all the notion that European or European-descendent societies are superior. Our role is to learn about, and from, non-European cultural frameworks. The task is arduous and takes many years, but without transforming oneself according what one wishes to see in the future, it is difficult to avoid repeating the mistakes of the past.

Salvatore Engel-DeMauro is associate Professor in the Geography Department of the State University of New York at New Paltz. He is author of Ecology, Soils, and the Left: An Eco-Social Approach. His recent teaching subjects include physical geography, gender and environment, people-environment relations, and soils. The principal subjects for current research work are soil degradation, urban soils, heavy metals contamination, and society-environment relations, but he has also published on critical geographies, the European Union, gender and ethnopedology, Indigenous Peoples’ struggles, and pedagogy. He is chief editor for the journal >Capitalism Nature Socialism and co-founder, with Joel Kovel, of Ecosocialist Horizons.
Posted by Mike Shaughnessy at 09:59