Why The Green Party Should Avoid Coalitions 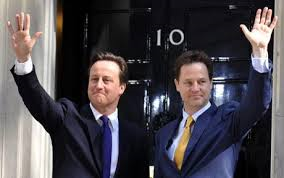 The result of next year’s General Election is as unpredictable as any I have known. The latest headline figures in YouGov’s opinion polling is CON 32%, LAB 34%, LDEM 7%, UKIP 14% and GRN 7%, giving Labour a small lead. Other polls put Labour and Conservative neck and neck and all polls show around 15% for UKIP and around 7% for Greens and 7% Lib Dems. The SNP are polling strongly in Scotland too.

All of which points to no single party having an overall majority of MPs after the May election. This being so, we will see either a minority administration or another coalition between two or more parties in Parliament. Of course it is still possible that Labour or the Conservatives achieve a (small) majority but I think the odds are against it.

Politicians (and more importantly the financial markets) dislike minority governments, which is the main reason cited by the Lib Dems for entering the current coalition government in 2010, i.e. ‘to maintain stability’. Minority governments are vulnerable to no confidence votes in Parliament which by convention leads to another election, so the argument goes, businesses dislike uncertainty.

So, there is fair chance of us having a new coalition government next year. If the Greens win a few Parliamentary seats in the general election which could happen, say three or four seats is eminently possible, we could be invited into a coalition. There would be a temptation to wring some policy concessions out of the dominant perspective coalition partner(s), maybe something on climate change or raising the minimum wage for example, as the price of cooperation.

In my view this would be a very dangerous thing for the Green party to do. We need only to look across the Irish Sea for a stark warning of where these things can lead. The Irish Greens joined a coalition with the right wing Fianna Fail party, were complicit in many unpopular policies (including road building) and promptly withered away into a micro party and it set them back a generation in electoral terms.

Even closer to home, geographically at least, the Lib Dems entered a coalition with the Tories in the UK four and a half years ago. The Lib Dems could have joined a ‘rainbow coalition’ including perhaps the single Green MP, Caroline Lucas, the SNP, SDLP, PC and Labour, which just would have had an overall majority. Some senior Labour figures poured cold water on this idea anyway, but the Lib Dems chose instead to form a coalition with the Conservatives.

As I said above this was all couched in terms of ‘stability’ and the Lib Dems didn’t want to be a in multi-party coalition as they thought they would have more influence on government in a two party arrangement. The suspicion is too, that getting the status and the Ministerial limos also came into their MPs thinking.

The decision has been disastrous for the Libs Dems, losing half of their members and two thirds of their voters and they will be lucky to retain half of their MPs at the next election and will throw away thirty years of steady electoral progress. The headline betrayal was the increasing of student tuition fees, when they said the complete opposite in their manifesto.

So, Greens beware! The furthest we should go, is to enter a Confidence and Supply arrangement with the more progressive parties and no deal whatsoever with the Tories. A C&S arrangement guarantees against a no confidence motion in the government and voting for the government budget. All other issues are considered individually and voting for or against on the merits of the policies. The C&S agreement should also be only for one year at a time, with new negotiations every twelve months.


This would provide some stability but also give the Greens the freedom to keep our principles and distance ourselves from any bad policies that the larger party wants to introduce. And of course, no trappings of office, limos etc, which would be a good thing because people are sick of self-serving politicians and this would no doubt increase our popularity.
Posted by Mike Shaughnessy at 06:58